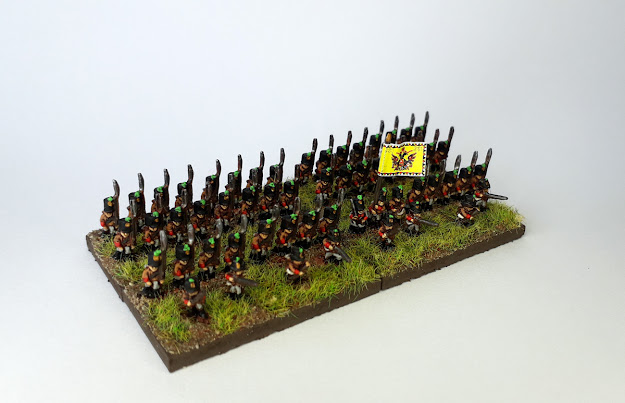 Continuing to plug away at my 1809ish Austrians, I am please to have finished the last unit of my Advanced Guard Division, the Archduke Charles Legion. The legion (six battalions strong) was raised by Archduke Charles (Erzherzog Karl) in 1808 from Bohemia and Moravia to provide bodies of light infantry for the Austrian army. Unlike the more numerous battalions of the same name raised in 1800, the 1809 legion seems to have been uniformed in brown coats with red facings and pike-grey trousers. The entire first battalion seems to have worn the Corsican hat (like regular jager battalions), but only the light companies in the other battalions wore the same, other companies wore a shako. This unit, with skirmishers wearing the Corsican hat but the rest wearing a shako, will nominally be the 2nd battalion which saw action (and took heavy casualties) at Aspern and Wagram in 1809.