Last week's outing saw my Wyld Elves invading Jim's human empire of Byzernia. Jim set up the terrain with three large woods, a couple of fields and a swamp - pretty good for my elves, and not so good for his artillery, shieldwalls and heavy horse.

The battle was documented in full, but my camera was on the wrong setting, and the lighting at Jim's is designed for dancin' and romancin' rather than photography of 10mm toy soldiers, so apologies for the quality!😁 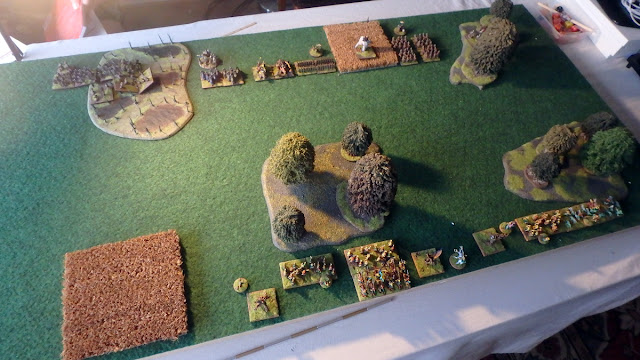 The Byzernians heavily outnumbered the elves, but the elves were all elite and pretty tricksy. The Byzernians (top of the shot) deployed irregular units of axe-wielding bonnachts, skirmishing kern and a rogue in the swamp on their right. The centre consisted of the Byzernian emperor himself, leading a unit of heavy horse, flame-throwing artillery and some formed shield-bearers. The Byzernian angel stood in the middle of the central field beside two small units of mixed shielded spearmen and archers and a captain. A unit of light cavalry skirmishers and the Byzernian magic-user deployed within the woods on the Byzernian far-left flank. The Byzernian magic-user came prepared with blink and blessing spells.
The elves deployed with the clear aim of making use of the two woods on their side of the battlefield. Two units of rangers, stag-riders and a captain deployed behind the woods in the centre, forming a left bulwark for the army; a tree-shepherd and a magic-user holding the left flank. The hollow centre of the line was controlled by the warlord and another magic-user, together with a giant eagle and a second treeman.  The right flank consisted of a third unit of rangers led by a captain, as well as the Wyld Hunt led by a rogue. Both elven magic-users had entangle and bless spells. 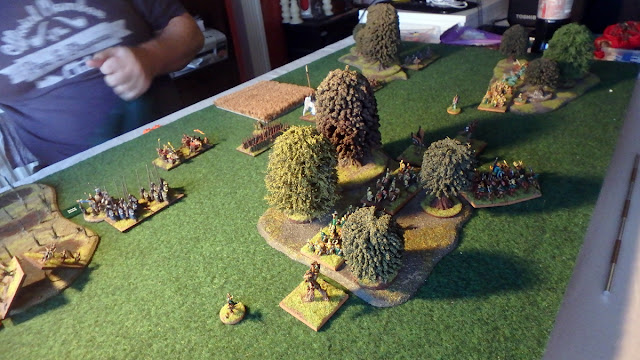 There was very little wrong on either side of the battlefield when we rolled for mishaps. One elven unit was late, but it was already deployed so far back it made no odds. On the Byzernian side, only the noble heavy cavalry arrived diseased.
From turn one, the elven battleplan started to play out as intended. The various ranger units secured the woods and the magic-users began entangling key Byzernian units to break up their battle line and keep the human heavy-hitters away from combats with the dainty folk. 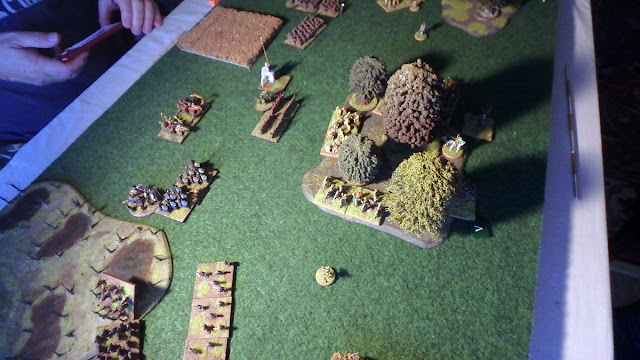 The Byzernians advanced in a bit of a haphazard line, hampered by the terrain on their side of the battlefield. 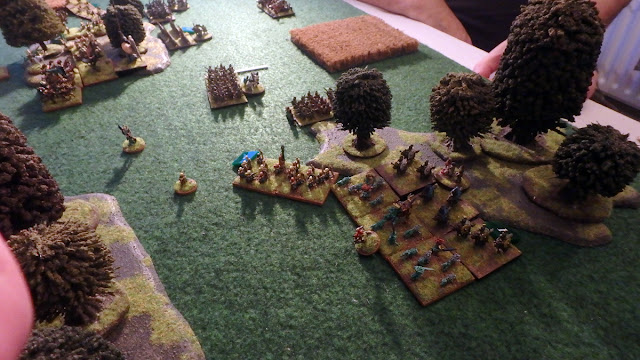 Over on the elven right/Byzernian left, the skirmishing light horse were having trouble passing through the woods, requiring the Byzernian magic-user to blink them out. No sooner were they mostly out of the woods, than they were charged and immediately overrun by the Wyld Hunt. The Byzernian magic-user would blink no more this day. Any resolve that had been lost by the Wyld Hunt was immediately restored by the feast trait as the ghostly hunters fed upon the fallen. 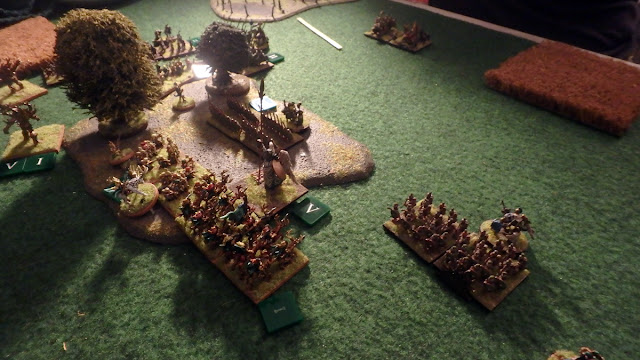 In the centre, the elves continued to hold the woods, loosely speaking. The elves kept evading, drawing the Byzernians deeper into the difficult terrain. Only the giant eagle failed to get out of the way in time, being killed by the Byzernian angel before he too was killed by a stampede of hooves and antlers (AKA the elven stag riders). 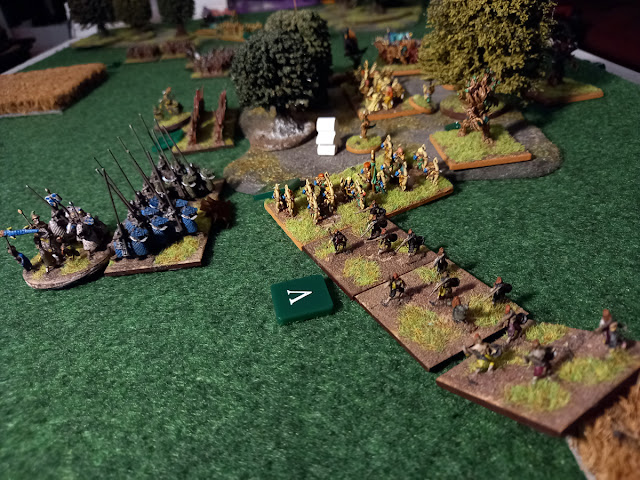 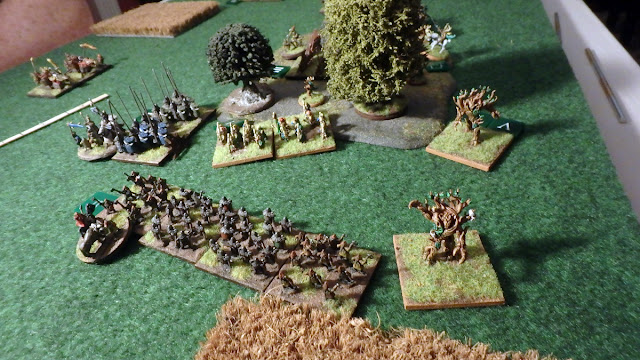 As the Byzernians sent forward their bonnachts as reinforcements, the elves threw forward a fresh tree shepherd towards their flank. He'd be out of command for the next turn, but could prove handy in the right circumstances. 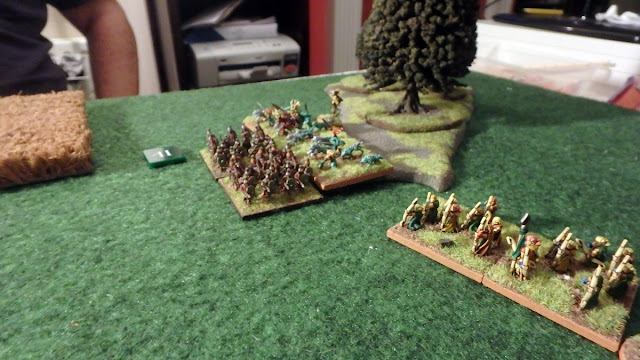 Meanwhile, the Wyld Hunt rode again, sweeping into the flanks of a unit of spear, shield and bow armed heavy infantry. The Byzernians had been entangled through much of the battle and were eventually abandoned by their commanders who led forward other units. Now, caught in column, they too were scattered after a single round of combat and fed upon the corpses of their foes. The Byzernian left was now gone and the Wyld Elves were starting to sweep up towards the centre. 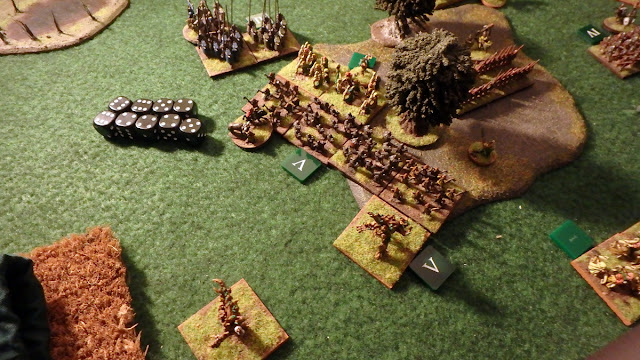 Although the Byzernians finally pushed one of the elven ranger units out of the woods, it was all a bit late. The Byzernian bonnachts charge the other ranger unit, but then were charged in the rear by a tree shepherd (not the out-of-command one though - he proved useless!). As the bonnachts scattered, the Byzernian army reached critical losses and broke, leaving the field to the elven invaders.
This was the first time that I feel I've used the elves to their full potential, maximising their tricksy-ness: evading, lurking in woods, manoeuvring and shooting. It was a bit of an overwhelming victory in the end. I would suggest that Jim's Byzernians generally got the better of the melee dice rolls, but my elves almost always got the initiative meeples when they needed them, and my two magic-users successfully cast entangle every turn which tied up a good 20% of Jim's entire force.