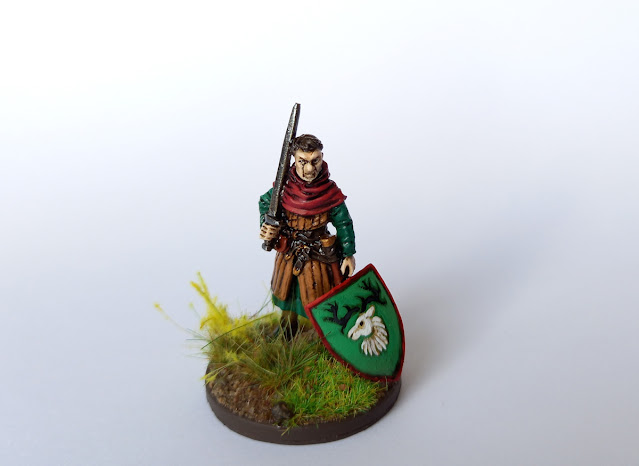 One of this year's projects is to build one of two retinues for Barons' War. When I ordered the rules from Footsore, I was sent a freebie miniature of an outlawed noble. Even though my first retinue is being built from Fireforge plastics (because I already had them and they are more-or-less chronologically appropriate), I decided to paint this chap up. You can't see so much in the picture, but this noble's nose was miscast and makes him look a bit Asterix in profile. 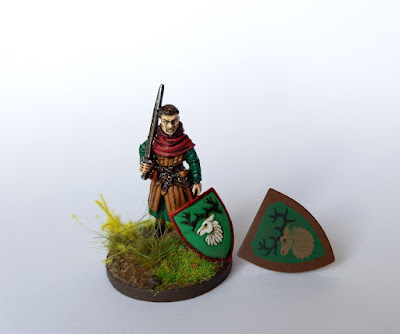 Once more, I have gone a little nostalgic when it came to the heraldry, taking inspiration from the Lego Forestmen of 1987-1990. I haven't yet decided how he will be used, but I may build an outlaw/forestmen retinue for him a little later in the year.

Size-wise, the Footsore range is slighter than some of, but taller than others! Helpful! You could fit two outlawed nobles in that Trent Miniatures friar, but the height is about right. The outlaw is noticibly taller (3-4mm?) than the Robin Hood miniatures from Conquest miniatures, but proportionate in heft. Fireforge look to be compatible in height with the Fireforge plastics, both the rabble taken from the fantasy range, and the histoic sergeants, but again they are somewhat heftier.

Email ThisBlogThis!Share to TwitterShare to FacebookShare to Pinterest
Labels: Medieval, Shadow of Sherwood