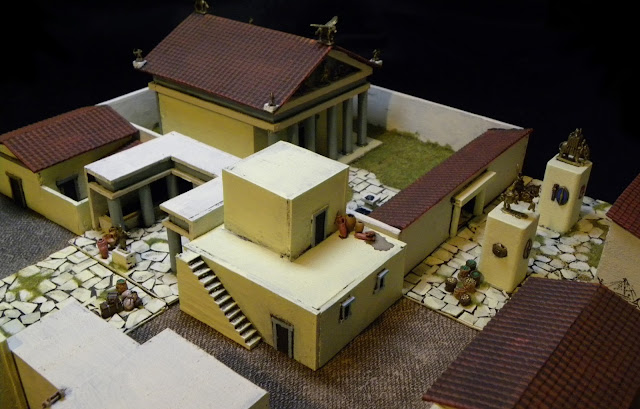 Way back at the dawn of time (the 1st of January this year to be exact), I made the first of what was to become a swarm of posts devoted to Song of Shadows and Dust, the ancient urban skirmish game that will soon be published by Ganesha Games. Of course, central to an urban skirmish game is the city itself. Being generally underpaid, I embarked on a series of building-works-on-the-cheap using balsa wood and as few other pieces as possible (the latter include great little resin boxes, bags and ceramics from Baueda, and the OO scale tile roof pieces covered in earlier blogs.

After a full gestation period of just over nine months, the result is Antiocheia Mikros (or 'Little Antioch'). A series of 15mm scale buildings inspired by Syria in the first century BC. I am sure that I'll add more structures to the collection as time goes on, but what I currently have is more than enough to cover a 2'x2' playing table - if I use everything, it makes for a very densely populated domestic area. 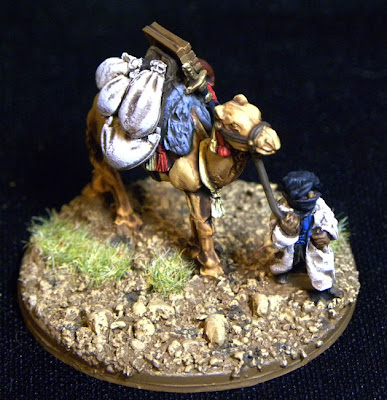 But before we get started, let me introduce you to Abd'Aziz (a 15mm Donnington New Era camel handler). He is a member of the Skenitai, a tent dweller from the Syrian steppe, and also a merchant. With him as our guide, and a vague sense of scale, I hope to show what can be achieved with a hobby knife, a stack of balsa wood, some pva glue, sample pots of Dulux house paint and very little modelling skill.

We'll start with the domestic structures. I wanted my city to show a mix of Hellenised and indigenous styles and so used a mix of tiled, pitched roofs and more traditional flat roofs. This adds variability to the look, allows the creation - through careful placement - of 'Greek' quarters and 'Syrian' quarters if so wished. As traversing flat and pitched roofs are dealt with differently in the game, it also adds to the flavour that way.

I have tried to keep all the colours fairly muted and consistent. For the basic lime washed-mud brick, I used a 'vanilla' and a 'linen' paint so there is some variability, but not a huge amount. I put scraps of graffiti around the place, normally on side or rear walls. Other than the obvious Python-inspired parody - ROMANES EVNT DOMVS - all the writing and pictures is/are based on real graffiti, whether it be Latin, Greek, Nabataean or Safaitic. I used drips of brown wash on some of the window sills to represent various waste products being turfed out windows into the street below. I suspect more windows should show the staining, but didn't want it to become overwhelming.

Next, we come to the paved plazas and open spaces. These can be used as a block of 'tricky terrain', imagining them to be cluttered with more goods and traders, or as just an open space with a pile of tricky terrain/cover in set places.


Finally we come to the civic structures. Antioch was known for its abundant fountain houses and the availability of sweet waters so I felt obliged to make one up for my suburb. Luckily, I was able to use the plan of the nymphaion at Magdala as inspiration. The temple, dedicated to Apollo, is loosely based on the Seleukid vernacular style known from Ai Khanoum, Dura Europos and Jebel Khalid, which combined a Hellenic veneer with a Semitic ground plan. The temenos (precinct) should, in all honesty, be somewhat larger (at least twice as big) but the foot print on the table is already quite dominating so I had to make concessions.