We ran two more games of Song of Shadows and Dust up at Wee Gamers this week. The rules themselves are coming together very well with only slight questions raised and modifications made as a result of the testing.

The first game was a shifty stealth mission. In a standard game of SSD, both players roll independently for their objectives. In a stealth mission, only the attacker rolls for an objective (in this case, an assassination attempt). The defender then deploys their full faction across the board, however, they may only activate characters who are within line of sight of an enemy model. The attacker deploys a reduced force (1/3 of the points value of their faction) and has to make their way across the board and achieve their objective without being overwhelmed. 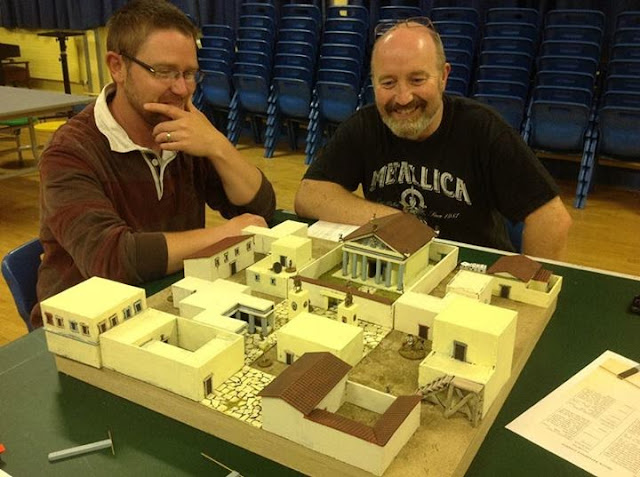 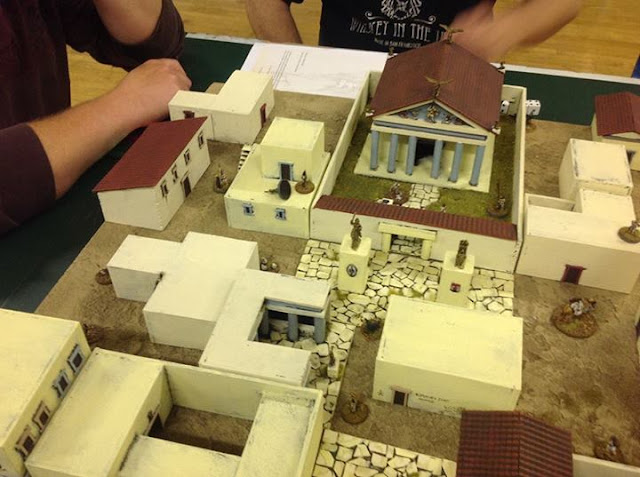 In these shots, Iamblichos the assassin is trying to knock off Strato, the leader of the Kybiosaktoi. He started the game at the board edge closest to the camera and has managed - despite being kicked off a roof by a young girl - to sneak around to the back of the temple. He's that small dark shape by the dice just to the right of the temple.

In the end, the assassin's impetuousness (or rather, the player's - Brett, I'm talking to you) led to his down fall. Rather than catch his breath in the shadows behind the temple, he blustered round the corner to attack his target but was unable to strike a blow. In the next round, Strato's drunken bodyguard joined the fray and used his rhomphaia in new and experimental ways to kill the would-be assassin and finish the game. It was a close match, and could have gone the other way. But it didn't.

The second game was a normal match with each faction rolling for their own objective. It turned out to be a fairly topical game to be held here in Northern Ireland with the Roman (republican) demagogue Sabinus and his gladiator bully boys trying to burn down a tavern frequented by the local militia. The militia - temporarily dubbed the PSNA or Police Service of Northern Antioch - in turn were out to bag and tag themselves Sabinus or one of his men to take back to headquarters for heavy questioning. 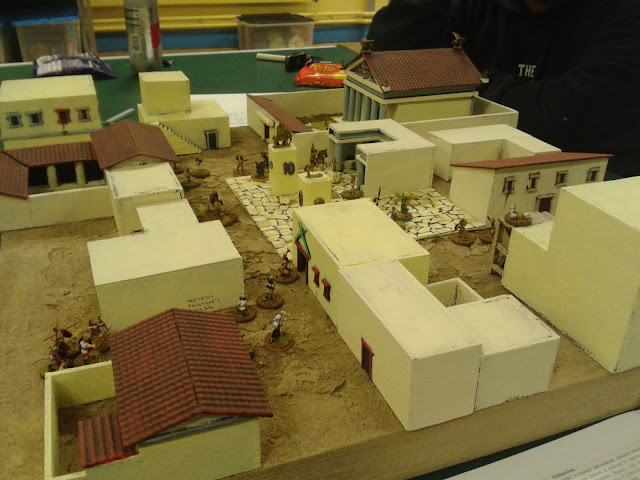 This shot (not the best photography in the world) from the start of the game shows the militia column starting to make its way through the alleyways to the central plaza where they hope to bag their opponent. The building in the middle foreground is their drinking hole which Sabinus's boys want to burn down. 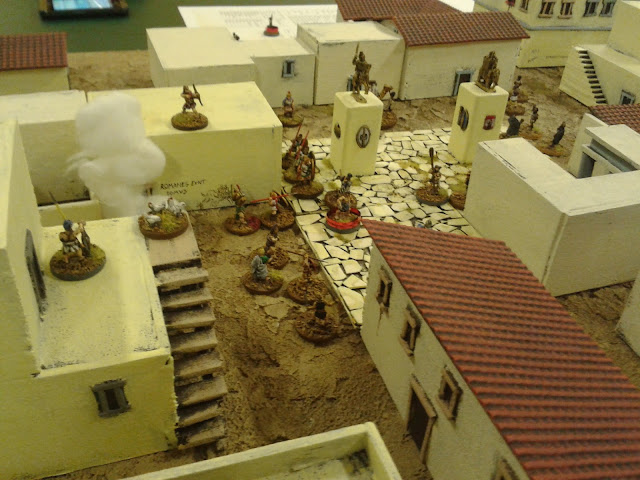 Taken from the other side of the table a few turns later, the militiamen can be seen pouring into the square while their marksmen stands on the tavern roof taking pot-shots at the gladiators below. Sabinus can be seen trying, and failing, to incite loitering civilians while already smoke is billowing out of the back door of the tavern.

This game saw several civilians activate to join one side or the other while the centre of the board became something of a blood bath. The randomised burning mechanic means that although the arsonists set the pub alight, there was always uncertainty as to when it would be destroyed. In the end the body count from the skirmish grew too high - there was too much public attention on the action and both factions were forced to abandon the area to lick their wounds. Smoke filled the air but the building was still standing at the end of the game. Sabinus was removed by a well placed arrow but none of his boys were abducted. A bloody draw result with only 1 victory point awarded per player.

We were testing the campaign injuries and recovery rules after this game with the results that each faction lost only one member permanently. One of the militiamen suffered an injury to his fighting arm while the trauma of his arrow wound caused Sabinus to turn to drink (i.e. in a formal campaign he would recover but would also receive the Heavy Drinker special rule).

Thanks again to the players and the gents at Wee Gamers for putting us up.