Snapshot of the last two weeks.

With the traditional Christmas slowdown in work (and current - hopefully temporary - unemployment) I've managed to snag quite a number of games over the last couple of weeks. Here is just a taster of the miniature madness.

We played the largest game of Hail Caesar to date - six commands of Republican Romans (Brett and Conor at the helm) vs. three commands of Seleukids (myself) and four commands of Carthaginians (JB). A bloody affair and a stalemate which could have gone either way several times throughout the night. 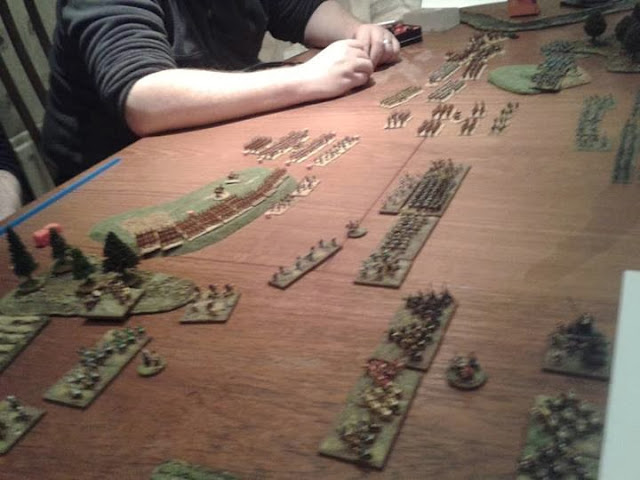 It was great to see the 17th century Hollanders and Colonial Spanish back on the table again having a go at each other. Don Brett and Herr Jim played an introductory game of Irregular Wars at the Wee Gamers' Bunker this week which seemed to go down quite well. The Spaniards had the upper hand from the very beginning with more success in the recruitment phase but the Dutch held on quite well. For a while. 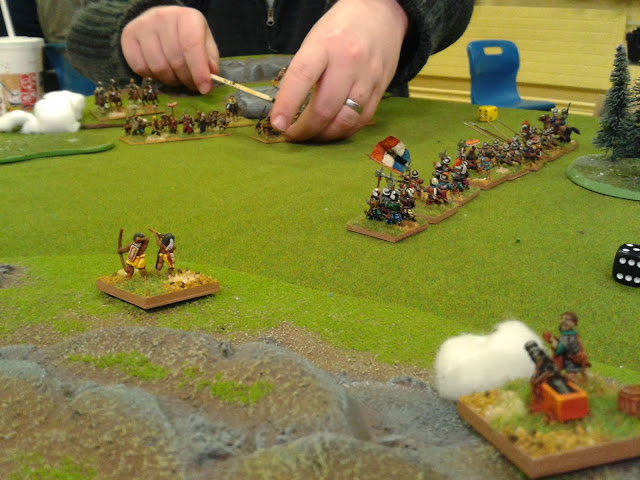 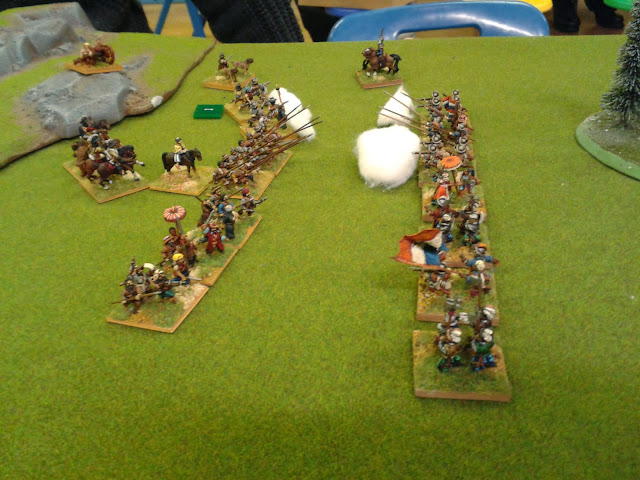 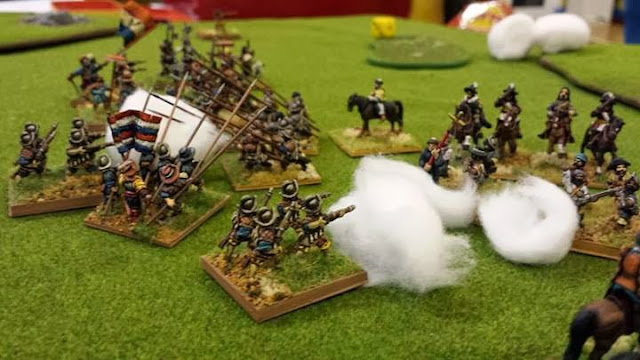 I took my new Apollo and Artemis warband for Song of Blades and Heroes out for their first run last night against some pretty tough Uruk Hai orcs. With lots of high combat factors the game was a bit of a grinder but the divine twins managed to get out of it alive. Apollo spent quite a lot of time lying on the ground being stomped on but his heavy armour miraculously saved him every time. The warband worked well and was nowhere as cheesy as I feared it might be. The figures are on such large bases that there was plenty of room to be ganged up on. Great little game and a good simple introduction for Ivor who is keen to get a handle on the rules before our upcoming SBH competition day next year. 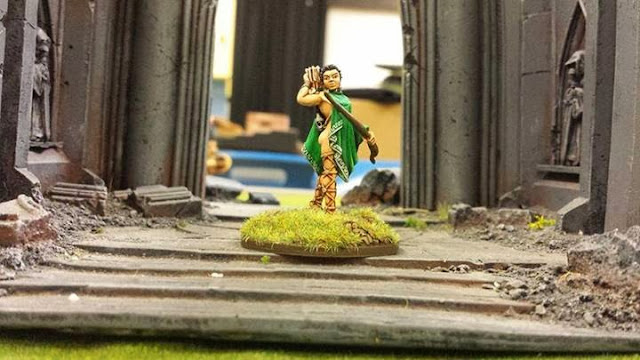 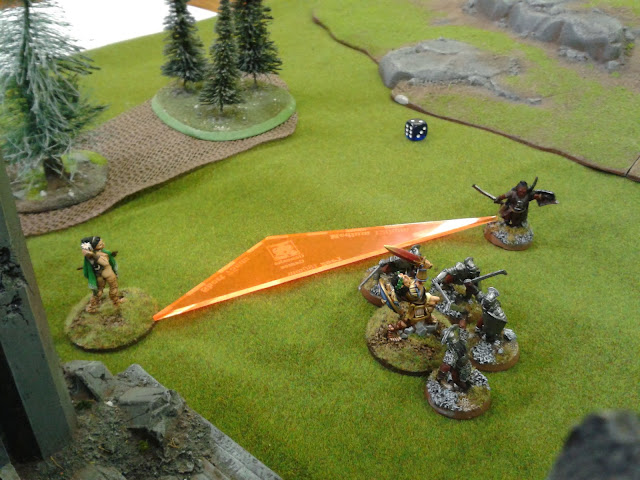 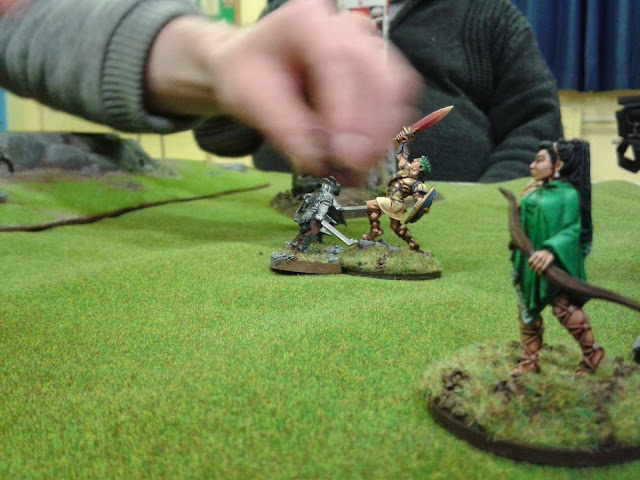 I tested out Song of Gold and Darkness, the SBH dungeon crawl, for the first time as a solo game using off cuts of lino floor tiles as rooms. My Greek inspired heroes, the Order of Chiron were trying to rescue their Amazon, Euryleia, from a cave or grotto held by random enemies. Each 'room' included two counters which bore random numbers relating to a list of potential foes made up of my other warbands. For example, a 1/1 result was an empty room, a 1/3 contained three satyr archers and a 3/3 held a minotaur. Anytime a model moved into the room, the counters were revealed and the enemy models placed. You can see that several of the rooms contain multiple piles of counters as these areas would spawn more monsters to cut off the heroes escape should they manage to rescue the Amazon. 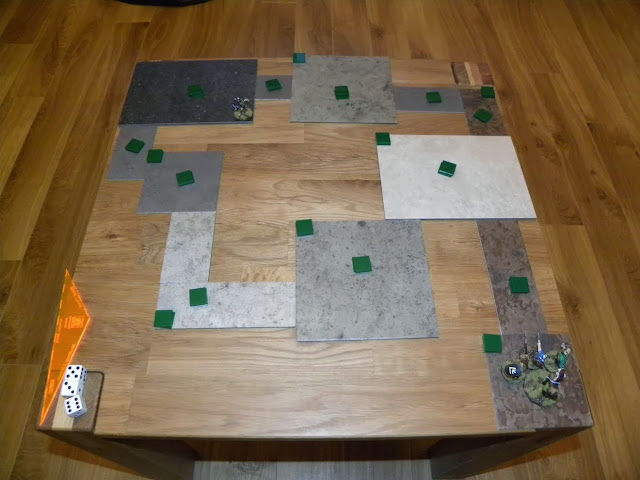 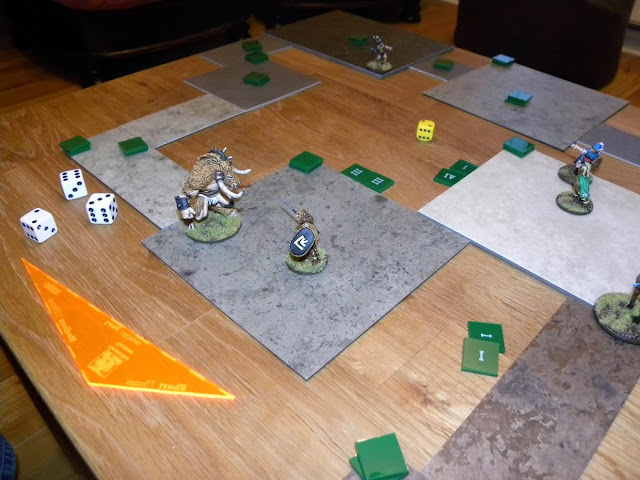 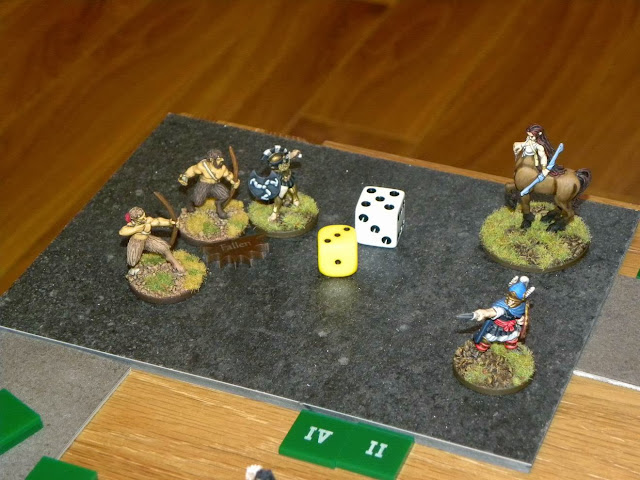 The game was quite a success with fun mechanics and enough randomness to not make it feel too strange playing against myself. In the end the heroes did rescue the Amazon who went on the pulverise several of her satyr captors with some great die rolls. However, to save one character, the Order of Chiron lost two - very 'Saving Private Ryan' of them. The tally of defeated opponents wasn't too far removed from an action movie either: 5 satyr archers, three furies (little fury berserkers) a sabre tooth tiger, a nymph, a witch and a minotaur. There was a goddess and a further satyr involved on the opposing side as well, but they survived the bloodshed.

Season's Greetings to all and very best wishes for the new year!