What you fear in the night, in the day comes to call anyway <10 bonus points to anyone who can tell me where that line comes from>. The monsters for Galleys & Galleons just keep on coming, chosen nominally to aid playtesting of Foul Winds, but principally just because I think they are kind of cool. In this post I introduce to you the cyclopes and the roc.

Cyclopes are a feature of several Greek myths. Three 'elder' cyclopes forged the weapons of the gods: Zeus' thunder bolts, Poseidon's trident and the invisible helmet of Hades. A tribe of 'younger' cyclopes lived as primative herdsmen on the island of Hypereia where, led by Polyphemos, they were encountered by Odysseus and his men on their return journey from Troy to Ithaka.

In the Argonautica, book 4, by Valerius Flaccus, the cyclopes are identified as fierce savages who prey on passing travellers:

"The wild Cyclopes in Aetna's caverns watch the straits during stormy nights, should any vessel driven by fierce south winds draw nigh, bringing thee, Polyphemus, grim fodder and wretched victims for thy feasting, so look they forth and speed every way to drag captive bodies to their king."

In book 9 of Homer's Odyssey, Polyphemos is described as hurling boulders at the Ithakan galley:
"He wrenched away the top of a towering crag and hurled it in front of our dark-prowed ship. The sea surged up as the rock fell into it; the swell from beyond came washing back at once and the wave carried the ship landwards and drove it towards the strand. But I myself seized a long pole and pushed the ship out and away again, moving my head and signing to my companions urgently to pull at their oars and escape destruction."

Pseudo-Apollodorus, Bibliotheca E7 recounts something similar:
"... he tore loose rocks which he hurled into the sea, just missing the ship."

It is this idea of terrestrial monsters hurling boulders at passing ships which allows the cyclopes to fit into a naval wargame. 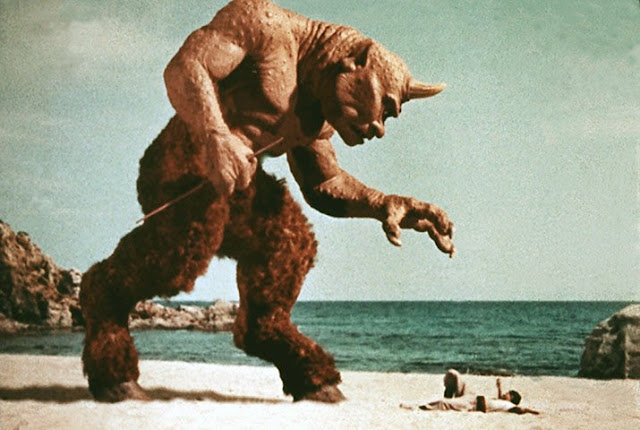 The roc (known as a simurgh among the Persians) was a giant bird of prey present in the folklore of many peoples around the Indian Ocean and appearing specifically in the tales of Abd al Rahman and Sinbad from the One Thousand and One Nights. Marco Polo was said to have seen a roc so large that it could carry off an adult elephant, while the 16th century account of Antonio Pigafetta insisted that rocs lived on the islands off the coast of China.

My cyclopes are 6mm scale from the mythological range by Rapier Miniatures and stand about 10mm tall to the eye. They come in packs of nine for just over £1 so, although there is only one pose, you can't really go wrong. Yhe scuplt clearly owes a lot to the iconic Harryhausen concept of the cyclopes as horned, goat legged creatures. In Foul Winds they can be used either as a type of Bastion which uses the new Indirect fire special rule, or as an active terrain piece which fires are any model with approaches it. 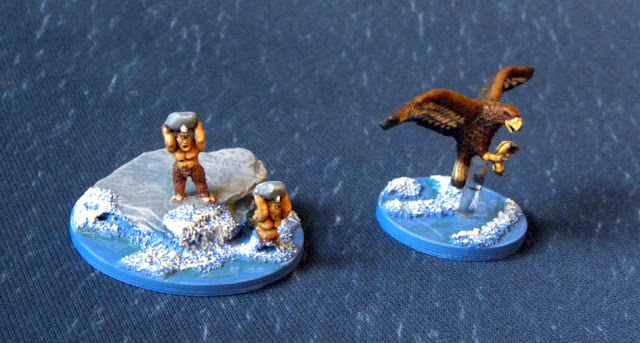 The roc is a 10mm giant eagle from Eureka miniatures fantasy range. They come with riders, but as these are cast separately, there is nothing to stop you using them as eagles. Rocs already featured in the 'Here be Dragons' section at the back of the core rules (flying creatures with good quality and a mediocre attack) and it's nice to get one on the table. Below are a couple of size comparison photos of how they stack up against 1/450 and 1/1200 scale vessels.

Suitably large, and suitably intimidating along side a 1/450 scale fluyt from Peter Pig.

I just hope the captain of this 1/1200 scale Langton ancient merchant vessel has his ship and contents insured...