Continuing with my slow preparations for full playtesting of the Galleys & Galleons supplement, Foul Winds (working title), I've just finished up two more monsters totaling around 200 points between them.

Sirens
Despite being portrayed in all manner of ways in popular media, the Sirens were originally three sea nymphs who served as handmaidens to the Greek goddess Persephone. When she was abducted, the nymphs were given the bodies of birds to help them search for their mistress. Unsuccessful, they eventually settles on the flowery island of Anthemoessa.


From their island home, the Sirens would enchant the crews of passing ships with their beautiful song, luring the men to their deaths on the rocks off shore.

In Greek art, the Sirens were depicted as birds with either the heads, or the entire upper bodies, of women. It is not always clear what kind of birds the nymphs were supposed to have changed into. 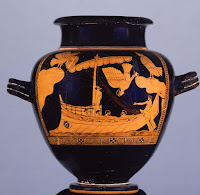 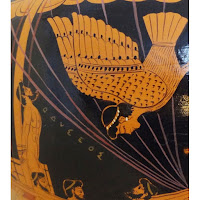 The famous Siren Vase, made in Athens around 480 BC shows Odysseus on his homeward voyage after the Trojan War. He has had himself tied to the mast of his ship while his crew have blocked their ears. That way he could hear the Sirens' song without being able to act, while his mean are deaf to the enchantment. 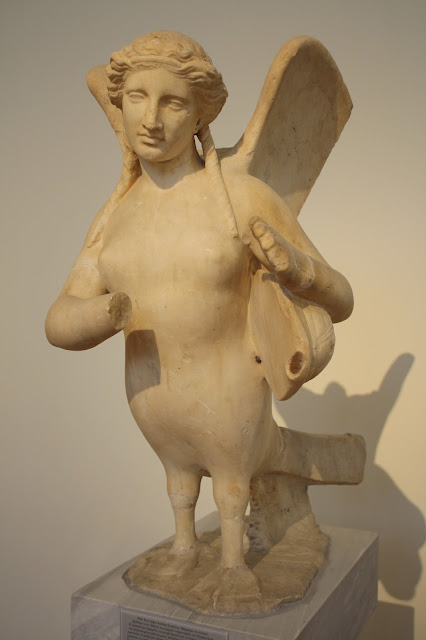 This funerary statue of a Siren from Athens dates to around 370 BC and shows the Siren with the full torso of a maiden holding the sound box of a lyre. Also, note the webbed feet. The sculptor clearly had a firm idea that the bird part of the body should be a sea bird.

In Galleys & Galleons, the Sirens are treated together as a single flying creature with the Mindbender magical ability which allows them to play havoc on opponent's activation rolls and even to seize momentary control of other models.

My Sirens are actually 6mm harpies from Rapier Miniatures. As always, Rapier delivers in terms of the quality of the sculpts and, unusually this time, they also delivered my order in a very timely fashion. I was rather impressed. At 6mm tall, I challenge anybody to suggest that these ladies are nasty harpies and not delightful Sirens. They are, naturally, over-scale for my 1/450 ships, but at the end of the day, 1) I want to be able to see the model, and 2) I couldn't find a manufacturer who made 1mm tall nymph-headed birds.

The Daughters of Ægir
My second new creature of the deep is another collection of creatures on one base - three of the (nine) Daughters of Ægir. According to Norse myth, the daughters of the sea-god Ægir and the sea-goddess Rán were personifications of the waves - their names translate to things like 'Foam Fleck' and 'The Pitching One'. 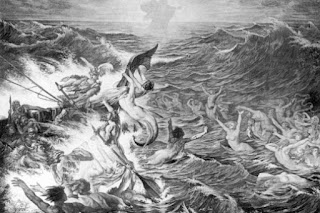 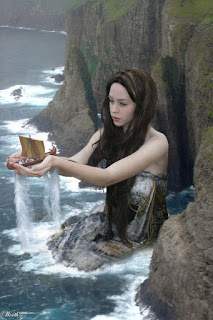 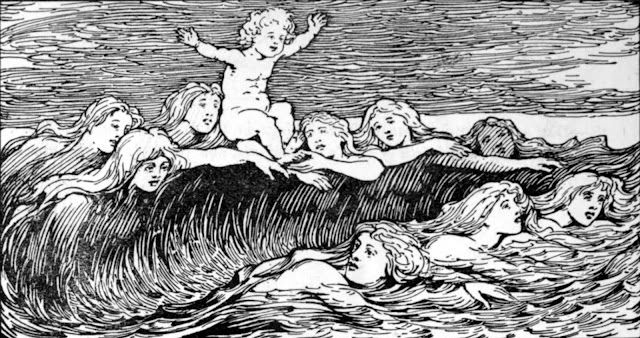 Finding it much harder to source good inspirational material for these moist maidens, I ordered a pack of water elementals from Pendraken's new Warband fantasy range and stuck three of them on a base to represent at least some of Ægir and Rán's offspring. These are actually rather towering models (between 20 and 25mm tall) and very intimidating next to the 1/450 ships.

In the game, the Daughters of Ægir function as a single submersible creature with the Hydromancy magical ability allowing them to manipulate currents and conduct a powerful wave attack.

To finish off with, here is a happy family snap showing 400 points worth of creatures of the deep: Triton, a sea monster, the Daughters of Ægir and the Sirens. Regular pick-up games of Galleys & Galleons commonly only call for 200 points worth of models, but I'm looking forward to using these all together soon.