Return of the Grey Wolf Clan

Following on from their previous adventures (1, 2, 3), Mark's Grey Wolf Clan are back!

In this installment of PreHistory month I played five games representing episodes from the hunting season of the Grey Wolf Clan, my Palaeolithic hunter-gatherer band (as interpreted by Mark Copplestone via Hollywood). There will be guest appearances by the new snow terrain discussed last time, the last Gomphotherium, and also the Trout Clan, my “other” band of Palaeolithic people.

I’m doing only a brief report for each hunt and limiting it to one or two photos each.

(1) The first Spring hunt
With snow still on the ground, a party of the four fittest surviving hunters have been sent out from the winter camp to find fresh food. They must kill 4 Bulk, not only as badly-needed food for the Clan but also to fulfill a pledge to the Spirits. Failure may mean the ancestors look on their descendants with disdain - or worse. 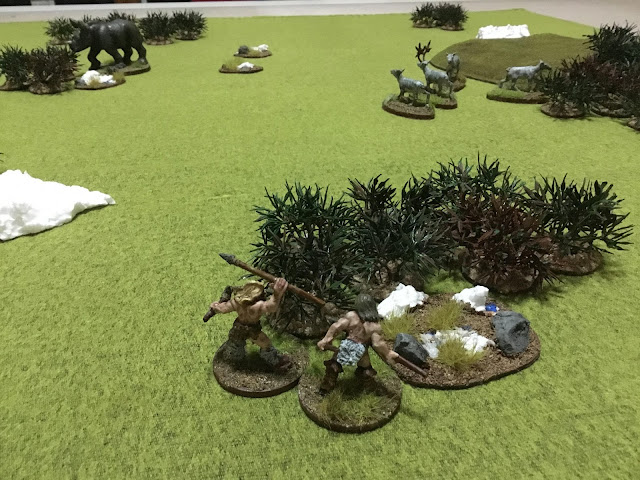 The photo shows two of the hunters, Charlie and Wills, skulking towards a small herd of caribou (2 Bulk each). The other two hunters have circled the other way. The hunters will leave the young rhino (Giant Grazer, 4 Bulk) alone, it’s too difficult and risky to tackle on this mission. The caribou are nervous, already one has been spooked by the other hunters and moved away.

The Spirits will be pleased this year. The hunters pulled off a neat converging attack, from across the open ground and from over the hill, so that a stampede away from one hunter usually took them closer to another. Two caribou were killed, two others escaped, both wounded. One hunter, Lucky Eddy, was trampled and wounded by a stampeding beast

(2) The Gomphotherium
Rumours have reached the Grey Wolf Clan of a really, really big mammoth that lives in a remote lowland valley. A party of the best hunters is given permission to seek the giant and report back - with tusks if possible. Five hunters, all spear-armed, set off to prove their fitness and courage. 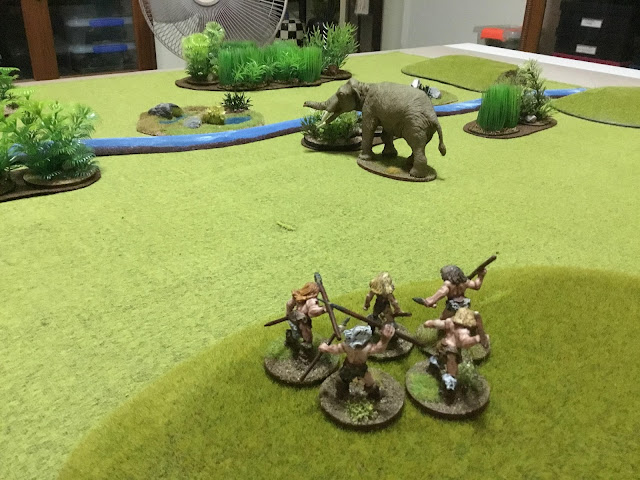 They find the beast complacently shovelling up water plants in a marshy valley, and watch it for awhile from a nearby hilltop. The Gomphotherium ignores them. They wonder what it tastes like.

After taking auguries (consulting the Giant Grazers Reaction Table) the hunters agreed to all sneak up and attack together, rather than spread out and surround the beast first. This tactic was successful, as the beast was harried relentlessly, and dealt two wounds. It reacted by alternately fleeing then turning to attack the closest pursuer, which resulted in one hunter being killed and two being wounded. The Gomphotherium gradually retreated along the valley and finally a flee move too many ran it over a steep bluff.

The surviving hunters will now have to patch up their wounds, dispose of their fallen comrade, and cut out the tusks of the fallen giant. But before any of that it’s time for the “fresh gooey bits” (PDEE p14).

(3) Who Are These People?
A four-person hunting party has been tracking a lone mammoth for several days now. They are well outside the Clan’s familiar territory, and seriously considering giving up. Maybe one more day ... 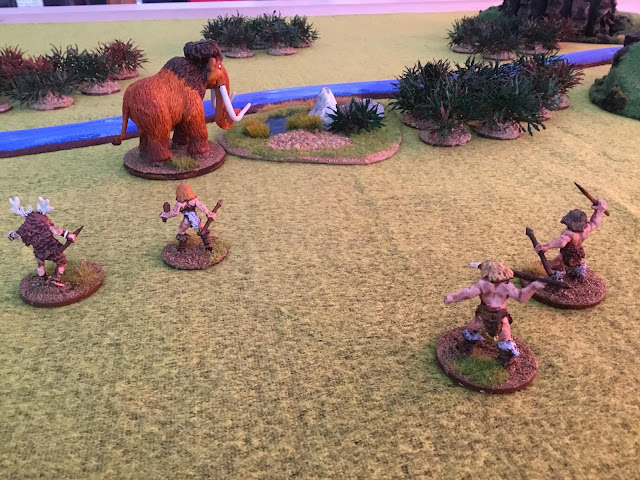 They close in on the mammoth as it grazes near a small stream. The spear throwing was unusually proficient, and the mammoth was killed (4 wounds) before it could flee across the stream. But there was a heavy price to pay. One hunter was killed, and another wounded by the enraged beast. And then ... 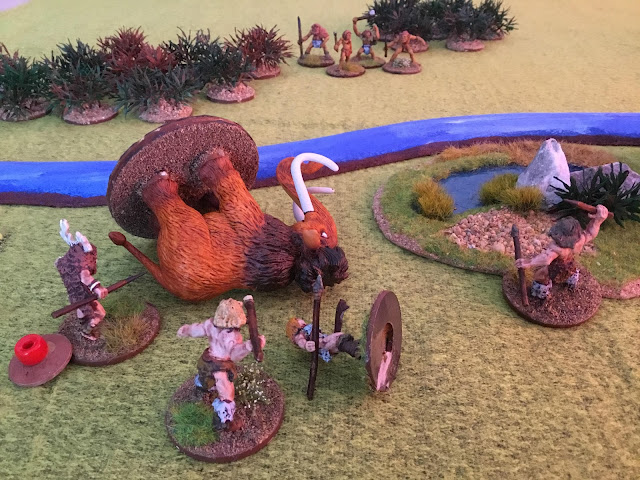 First contact. Across the stream a hunting party from the Trout Clan appear, on the lookout for anything edible, alive or dead. The Grey Wolf Clan have heard stories about the “others” from travellers, but this is the first actual sighting. The people of the Trout Clan likewise.

Game notes: (a) the Trout Clan are Pulp Miniatures figures by Bob Murch. They are smaller than the Grey Wolf Copplestones, so won’t pass as Neanderthalers. I’m calling them, naturally, Homo pattayaviensus. They have darker skin than the Grey Wolf Clan members, and all seem to have red hair. They also prefer clubs over spears as weapons. (b) my house rules for this game use weighted dice to decide the options of flight/fight/cooperate. The weighting takes account of (i) the mammoth is already dead and there is enough for all, (ii) one group is significantly stronger than the other because of hunting casualties.

Driven by curiosity both parties came down to the stream to take a closer look. The Grey Wolf hunters took care to stand between the “others” and the mammoth carcass. Then (against the odds) one of the Grey Wolf Band threw a spear at a Trout hunter. It missed, but as the first hostile act it meant the Trout band now took on the “beast” role for the rest of the game (as pack predators).

Two Grey Wolf hunters crossed the stream to attack the others. Initial success (two others wounded) turned to disaster as both Grey Wolfs were killed. The sole survivor ran away as fast as he could, wondering if he could get back alive, and what he was going to tell the Elders. The Trout band rejoiced, with a mammoth and three humans as fresh kills to feast on.

The Big Bluffs are a lakeside vale rich in seasonal gatherables which the Clan visits at this time every year. These is even a footbridge across the marshes to make access easier. No large animals have lived in this little oasis for several years now, they were all hunted. But unknown to the Clan recolonisation is under way.

Each time a figure inside a thicket or marsh fails an activation roll, a warthog (Pack Predator) one of a family of up to three) will immediately Attack.

The band has eight Turns to achieve the following goals:
(1) Gather at least six “resources” from inside the thickets and marshes. There is only one resource per marsh and thicket. To gather it requires a figure to Roll a “6” for activation and remain stationary, undisturbed, for that action. Also a dead warthog counts as a resource.
(2) Both children must survive to exit the tabletop over the footbridge (or no plausible impediment to their doing so).
(3) One hunter must spend the whole day within 1M of the footbridge, making minor repairs, fishing in the swamp etc. 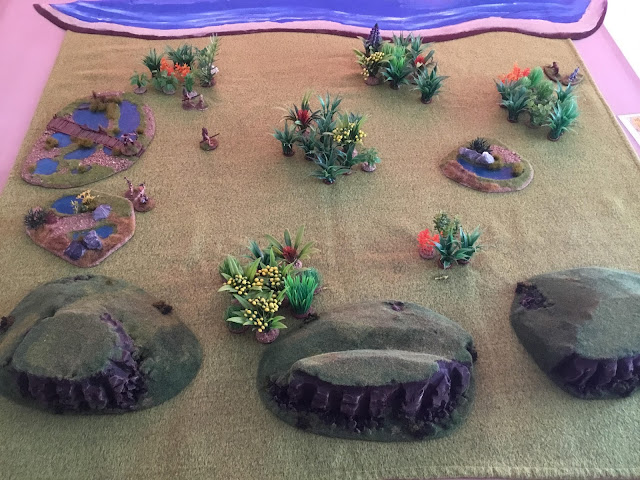 The resource gathering begins. The band has entered (and must leave) over the footbridge at L). The bow armed hunter stays behind to start repairs. Two groups each of an adult and a child approach terrain features to start gathering. The last hunter stands in open ground as backup. The two hounds at top R of the tabletop are an oversight. 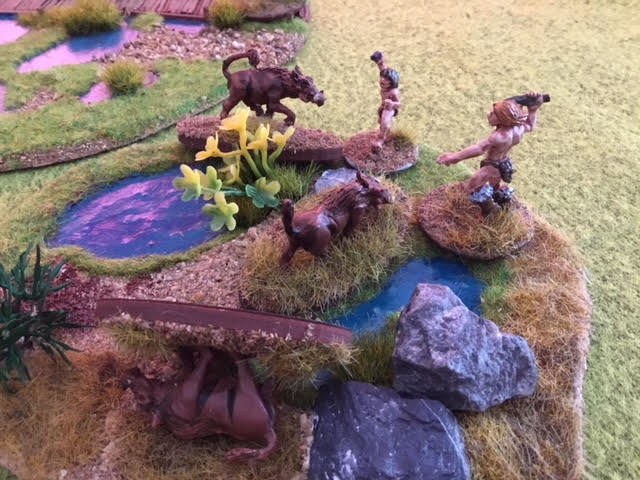 It turned out the whole warthog family was foraging in this marsh. The young hunter killed the first one that attacked, but the other two were right behind it. They wounded the hunter and killed the child. Oops. Then they killed the hunter too. Oops again.

Elsewhere the gathering proceeded apace, undisturbed by further warthogs. They were dealt with by the bowman on the footbridge, with help from one of the other hunters coming back at the end of the day (Turn 7/8).

The band gathered four sacks of eggs, snails, mushrooms etc, and a further three will come from the warthogs when they are butchered. But overall the day has been a draw at best for the Grey Wolf Clan. The loss of a promising young hunter, and the favourite child of an influential elder, is not something they’ll be looking forward to reporting at the campfire.

(5) Last hunt of the season
The days are getting shorter, and the first frosts have appeared. Now the herds are starting to migrate away from the Grey Wolf Clan’s range. There is talk among the young men of following them wherever they go, but for this year at least the wisdom of the elders prevails. It’s time for the annual drive, to top up the smokehouse with fat and meat for the long winter. 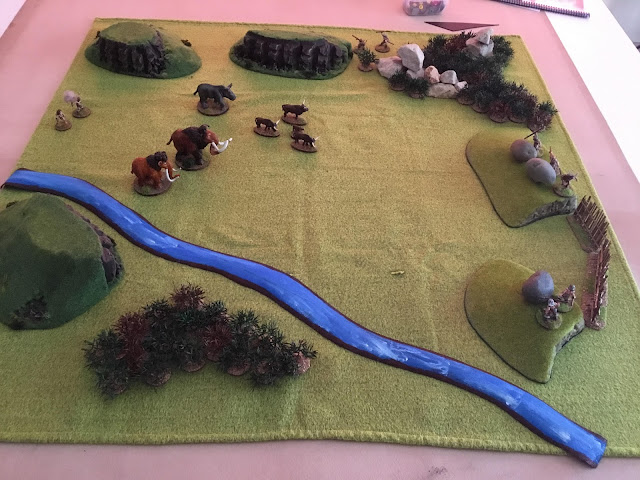 The plan is to trap as many of the beasts as possible, using fire and howling to drive them into the kill zone. There are six Giant Grazers on the table at 4 Bulk each, and a calf with no Savagery rating, Resilience and Bulk = 1. The Clan needs to kill 18 Bulk for the hunt to be a success, 2 Bulk for each hunter taking part in the drive).

The river is impassable. The thickets are per the rules: passable for beasts at normal speed and humans at reduced speed.

This year the drive was a big success, unlike last year when most of the beasts broke though and escaped. One Aurochs and one mammoth were killed by rolling boulders. The other mammoth and the rhino fell over the bluffs. Another Aurochs, and the little calf, were trapped and speared inside the corral. Only one Aurochs escaped, wounded, so the hunters probably will be able to track and finish it tomorrow, 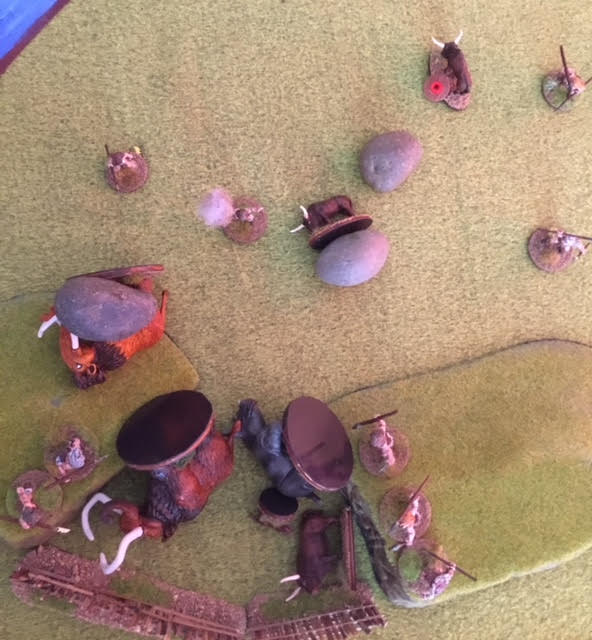 A scene of barbaric carnage? Or “mum the smokehouse is full!” You choose.

A good end to an ordinary year for the Grey Wolf Clan. They have lost four out of their nineteen adult hunters killed this year, plus the young man and the elite child. But they have the tusks of the Gomphotherium which can be carved into prestige objects, and an overflowing, indeed covfefe, larder to see them through the winter.

That’s all from the Grey Wolf Clan for this season (barring any winter activities if I make a lot more snow).