Sensational news in Pattayavium a few days ago with the arrest of Barabbas, serious criminal and public enemy number one. After strenuous attempts to get him to name his associates failed, he will be executed this morning.

Unknown to the authorities and most of the citizens, Barabbas has followers who are preparing to mount a desperate rescue attempt by overpowering the guards as he is led to his just desserts.

The Execution Party:
A squad of the Prefect’s guard led by their officer, and accompanied by civilian relatives of some of Barabbas’s murdered victims. Total 312 points.

Barabbas (0 points) Q2 C0
Can only be moved S and not more than 2xS per turn.

Victims’ relatives will always attempt to assist the guards in the event of an attack, will never assist the rescue attempt.

The photos below show the table (900x900mm) set up for the game, including random civilians but not the cast of characters. 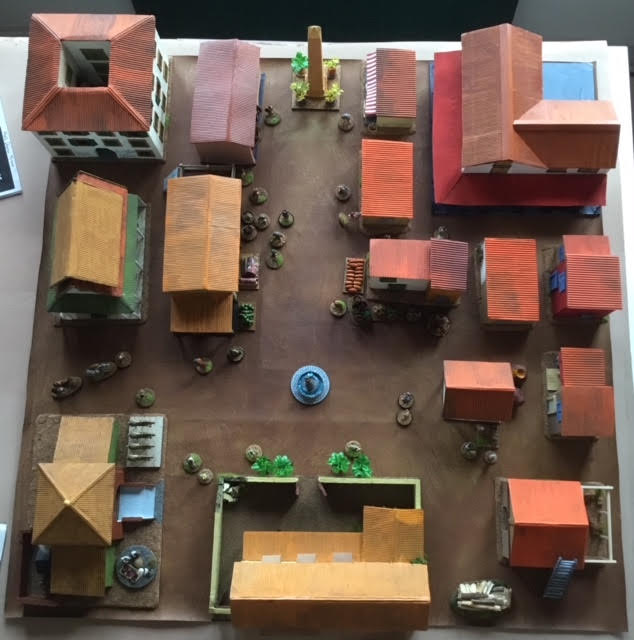 The execution party will emerge at dawn from the Prefect's palace at bottom of shot, and march Barabbas down the street to the arena (just off table at top, past the obelisk) where he is due to be crucified and displayed during the Songkrania Games which start later today. 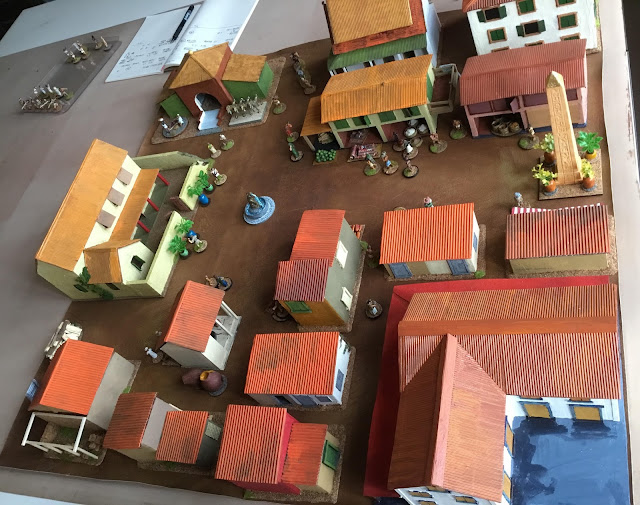 Because of his notoriety a sizeable crowd is expected to watch the procession, which is why the guard detachment is a bit stronger than usual. 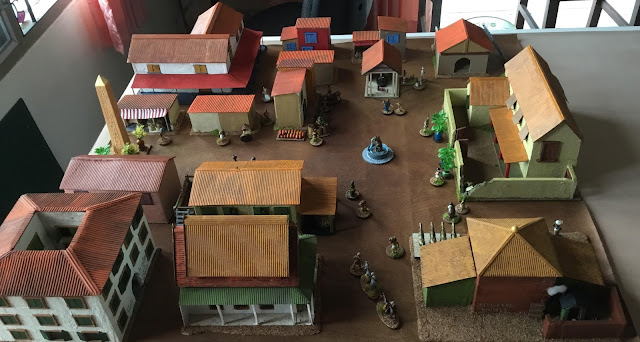 It's not a long trip so Matthias and his gang will need to look sharp. If the guards can get Barabbas to the arena table edge it will no longer be possible for Matthias and his henchpersons to rescue him. If the rescuers can get him (alive) off any other table edge, even if pursued, they will be successful. Other endgame possibilities are being left for later adjudication if necessary.

Matthias deployed his band of desperadoes on the street along which Barabbas would be taken. Letitia, and Matthias himself, stood at the corner of an alleyway opposite the big carpet shop.  Marcellus and Nikias waited across the road, outside the shop. Plautus and Saul tried to look nonchalant at the corner of Big Street near the fountain. The plan was for Letitia to step out in front of the Execution party to distract them, while all the thugs attacked simultaneously.

Turn 1
Right on time, Victor led the guards and civilians - and of course Barabbas - out through the palace gates. The photo below shows the situation at the end of the first turn. 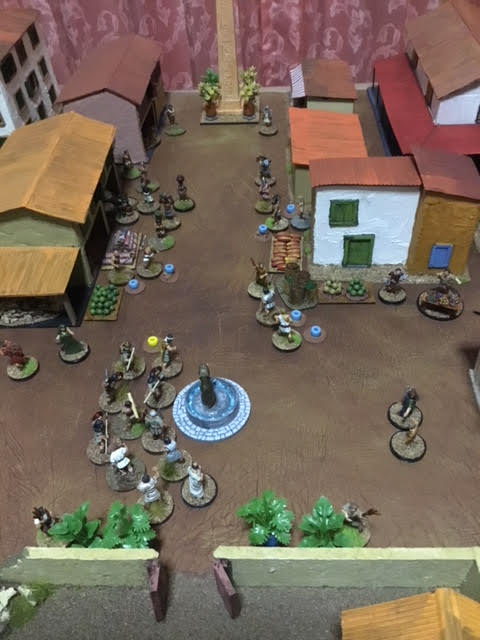 The would-be rescuers are all marked with blue beads. Victor’s procession is marked with a single yellow bead at the front. In the middle you can see Barabbas, carrying the horizontal beam to which he will, if all goes well, become more closely attached later this morning. The civilians (family members of Barabbas’s victims) bring up the rear.

Turn 2
Victor and the guards continued to move along, confined to short moves only because Barabbas wasn’t moving any faster. But a gap opened, with the civilians falling behind. Matthias spotted this and signaled the attack, and it was on for young and old.

First, Letitia stepped out into the street and the guards’ attention was immediately distracted. Then Plautus and Saul charged in each targeting a guard, but with only one activation each they could only make contact, not take a swing. Matthias himself was next into the fray, charging Victor, who held him off. Nikias tried to attack Victor too, and was knocked down. Last into the fray was Marcellus, but he also got only one activation so contacted a guard but could not initiate a fight.

Turn 3
The guards now had to react to the ambush. The ones in contact with enemy ignored the distraction of Letitia because they had more pressing problems! I dealt with these cases first before moving on to the unengaged figures.

Victor rolled two successes and used them to dispatch the fallen Nikias and then turn to face Matthias, causing him to recoil. It seems the guard commander is not known as a combat master for nothing!

At this point I noticed an error in the previous message outlining the context of the game: Victor has five guards under his command though only four were named. The fifth figure is Diogenes. As it happened the next combat is Diogenes v Marcellus. Diogenes was knocked down. Then Antiochus took on Plautus but was forced to give ground. Gaius fought against Saul and was likewise forced to recoil.

This left the unengaged guards Teres and Kersobleptes and the civilian stragglers.  Teres rolled three successes, enabling him to ignore the alluring Letitia and throw a javelin (aimed shot) at Matthias! I chose this option rather than have Teres charge Matthias because it’s becoming obvious the choice-of-two-combat-dice conferred on the thugs by their “streetfighter” skill makes them very dangerous melee opponents. Against ranged attacks they roll only one dice. Anyway, the javelin grazed Matthias and he was slightly wounded (fallen). Kersobleptes’ javelin missed Plautus by a hair but forced him to recoil.

And lastly I tried to activate the civilians. One of them advanced courageously but the others decided to stop and buy cold drinks from a passing vendor. And there they stayed until it was all over.

Initiative now passed to the rescuers. Matthias led by example, with three activation successes. He stood up and moved to contact Victor again, forcing him to give ground. Marcellus killed Diogenes who he had previously knocked down. Saul and Plautus charged into combat again, forcing Gaius back again. Letitia posed and pouted in her birthday suit, drawing gasps and stares (and pointed suggestions) from the crowd. Overall though, no further advantage was gained as the guards used their recoils to fall back to regroup, also gaining space to use their javelins.

The photo below shows the situation at the end of turn 3. The Rescue gang are marked by blue beads, the Execution squad by yellow. Matthias and Victor also have red “leader” beads. Barabbas, around whom all the action is swirling, has a red bead only. 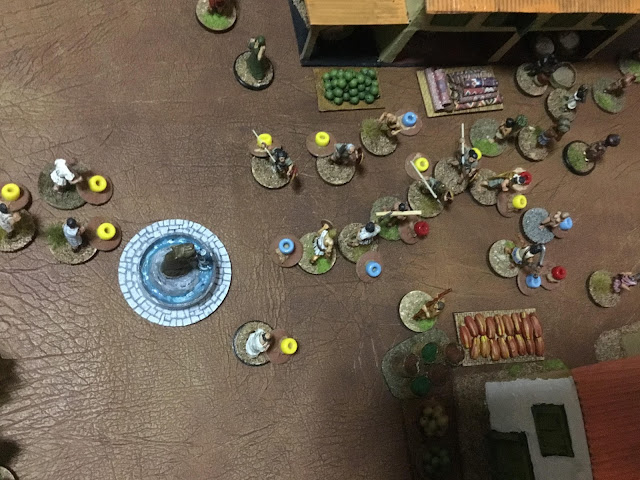 Turn 4
You can see from the photo that two of Matthias’s men are almost adjacent to Barabbas, but only one guard is adjacent, the others have been pushed back. And the civilians are still lagging. Could this be the turn that frees Barabbas?

I decided that bystanding civilians (not the victims support group) would not intervene in this street fight, as (1) it looks too dangerous and (2) it’s really what the Prefects men are paid to do.

Initiative is once again with Victor and his men. There haven’t been any upset turnovers so far, and I’m being tempted to push the luck of both factions. I rolled three activations for Victor. He shook off the distraction of Letitia, charged Matthias and struck at him, but the gang leader parried and recoiled. Better success elsewhere though, as the guard Kersobleptes nailed Plautus with a well-aimed javelin. But once again the victims’ relatives are showing little enthusiasm for getting involved in the fight, and initiative passes back to Matthias and his gang.

Matthias now has only two gang members standing - Marcellus and Saul - plus Letitia, who dodged a javelin just now. Victor has lost only Diogenes. So Matthias will need to act decisively if Barabbas is to escape. He rolls three activation dice - and scores one action + turnover. Bummer. He uses the action to move into contact with Victor, thus denying him unimpeded movement next turn.

Turn 5
Fair’s fair, so I rolled three activation dice for Victor too. Ha! Three successes. Matthias was forced to recoil in the face of a power blow. Two guards (Antiochus and Gaius) both threw javelins at Letitia, one hit and killed her, breaking the distraction spell. We know who it was, but won’t say to protect the safety of the officer concerned. The other guards, Kersobleptes and Teres, threw javelins at the other gang members, but missed. 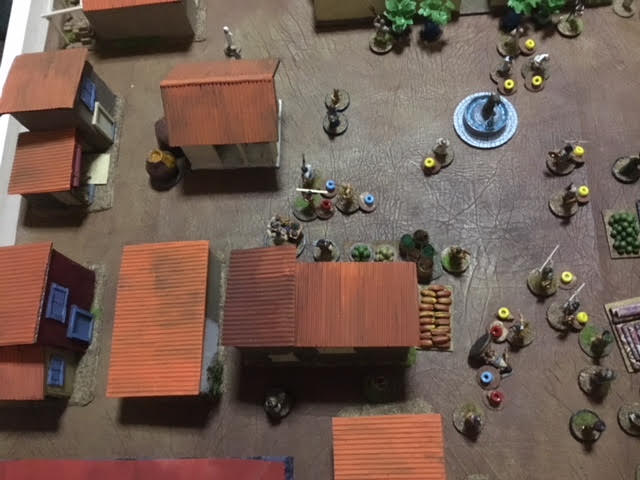 The photo above shows the end of turn 5. Saul and Marcellus, with Barabbas, can be seen in the C of the shot, moving down the side street towards the table edge at L. Matthias, on the ground, is at bottom R. Escape for both Barabbas and Matthias seems a long shot, though.


Turn 6
Victor killed the prone Matthias, triggering a cascade of morale tests (1) death of leader and (2) dead outnumber living. I decided that the two surviving Rescue gang survivors would have +1 on their Q rolls for the morale tests, because they are buoyed by successfully wresting Barabbas from the authorities. The result was that they survived although Marcellus got a bit scared (made one Flee move only).

But they’re not out of trouble yet. The guard Teres ran up behind them and shot a javelin at Saul, it missed. Then Kersobleptes tried to do likewise, but rolled a turnover! Saul hurried Barabbas along but he can move only S. I decided not to roll activation dice for Barabbas himself, he can move automatically if there is someone adjacent to prompt him.

Teres and Kersobleptes again tried shooting down the fleeing desperados, but again missed. Meanwhile, Gaius pelted down a parallel side street to try and cut them off before they can reach the table edge. Attempting to repeat this with Antiochus resulted in rolling turnover, allowing the fugitives to inch closer to success. They are now within 1xS of the table edge.

Turn 8
Teres tries too hard and rolls turnover for the first activation of the new turn. The surviving gang members, Marcellus and Saul, can now evade pursuit and shepherd Barabbas safely off the table and away. 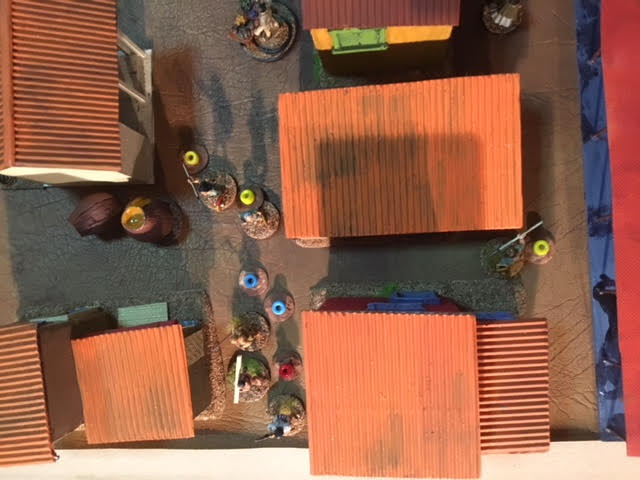