Going out with several bangs - Irregular Wars to finish the year

After quite a hiatus, I managed to get in a couple of games of Irregular Wars just before the year's end. Lee has been working on a French army for the New World - starting with Coureur des Bois with the intention of being able to morph it into French Adventurers in due course.


In out first game I commanded some doughty Hollanders, and in the second, a rabble of rag-tag Spanish colonials. I'm afraid that the light wasn't great for my shaky hands, and the sandy coloured battlefield caused havoc with the contrast settings on my phone, but I still wanted to give some sort of account for the games. 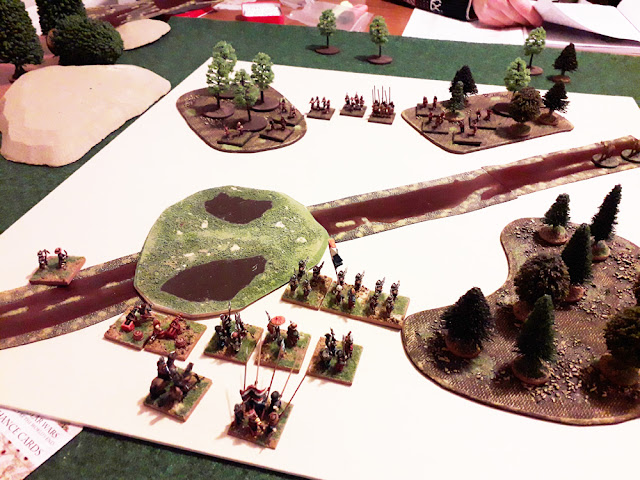 After recruiting our forces, my Hollanders (bottom of the photo) had more companies present - but then the Disease and Mishaps rolling saw two of my companies - some crossbowmen and a unit of halberdiers - bought off completely. Lee found that one of his coureur companies was late deploying to their designated location, while another was led by an overly enthusiastic captain who ignored orders and advanced into the open before the battle started in earnest. 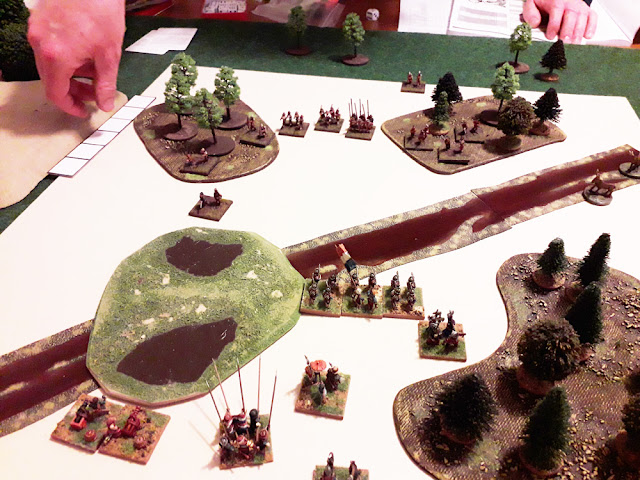 While most of the Coureur des Bois companies were deadly marksmen and woodsmen, the Hollanders were incredibly unsuited to the wooded and marshy landscape. Unable to cross the river with any speed, the Hollanders started to organise an defensive line along the waterway. Lee played rain cards for the first could of turns, so the Hollander battery of ship's guns lay quiet. 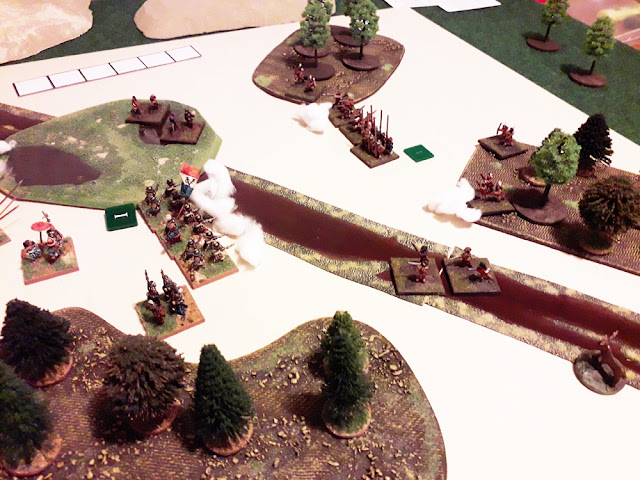 Just in time for the Frenchmen to come withing range of the Dutch shot, the skies cleared and the guns opened fire, sending plumes of smoke across the flood plain. There was some return fire from the French and their Indian auxiliaries, but surprisingly little impact on either side. 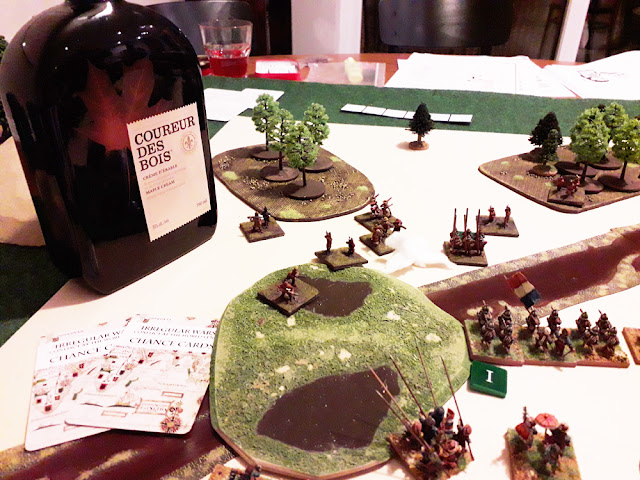 At that point, Lee, a native of Canada, tried to befuddle my senses but introducing me to a treat from his homeland and his army's namesake liqueur. Maple-whiskey-cream, absolutely delightful! 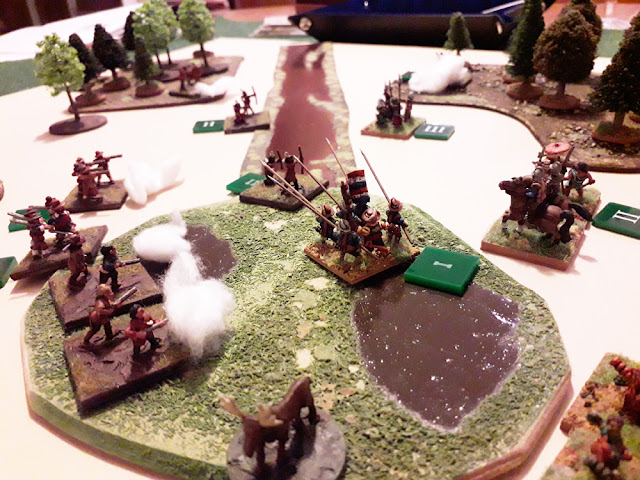 While their commanders were off drinking together, the cunning Coureur des Bois continued to pepper the Hollander drilled shot with bullets and arrows until all three companies scattered and fled the field of battle. 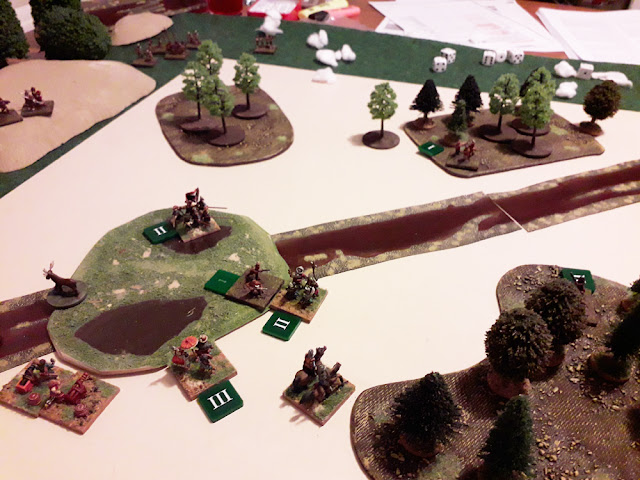 Things were looking pretty grim for the Dutch until the battery of ship's guns started to land their shots on target. The skirmishing coureurs and Indian scouts fled and, seeing them scatter, the French lord and his company of merchant-adventurers decided that discretion was the better side of valour and ran off as well. It was touch and go for a while, but the superior resolve of the Hollanders won the day. 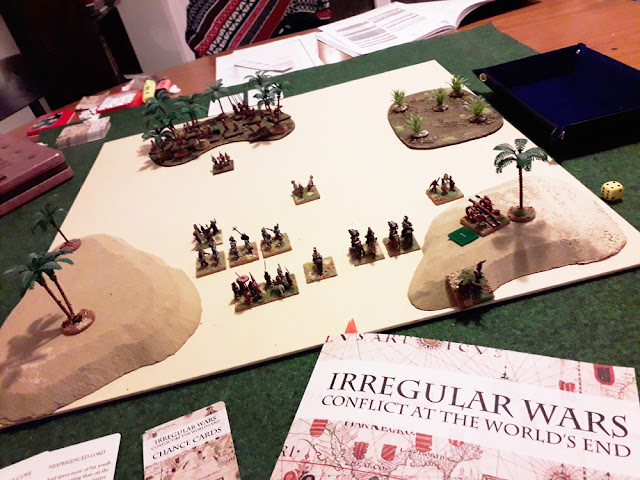 Game two took place somewhat further south, in a land of sandy hills and palm trees. This time the Coureur des Bois were the attackers and my Colonial Spanish were on the defensive. Both armies ended up having one enthusiastic captain (in the French case it was the lord himself!), one late company, and a couple of companies suffering from disease. Happily, the Spanish priest had a miraculous recovery. The Spanish lord was an inexperienced fop, while the French lord was experienced, but with a chronic stomach complaint. 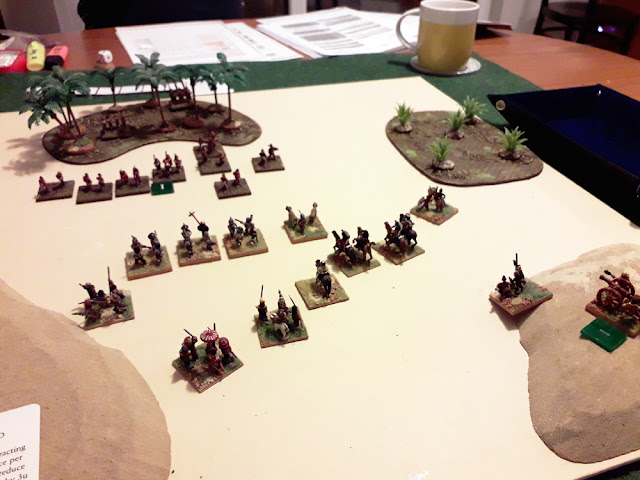 In an act of tactical recklessness, the Coureur des Bois lord decided to advance most of his men out of the woods, rather than turning his own company around and retreating. This left a couple of slower moving companies out of the lord's command range and these were become a weak link in the French chain. 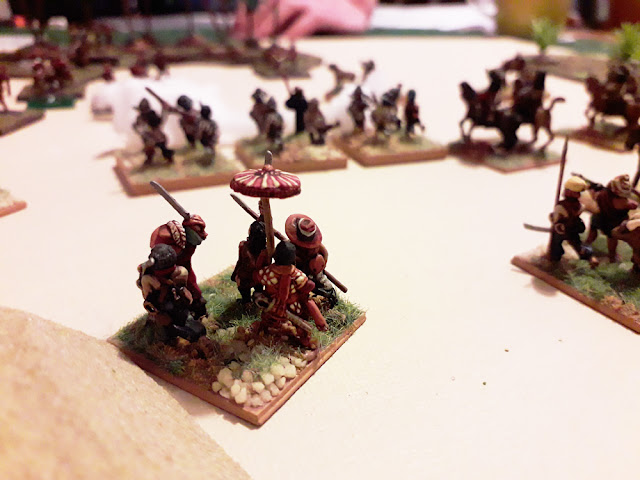 The Spanish advanced across the open in two rough lines, with war dogs and militia shot in the front, and the mediocre-at-best colonial mobs in the rear. The Spaniard's Indian mercenaries advanced towards reluctant French units still the wood, while the two companies of hidalgos took up position in the middle. 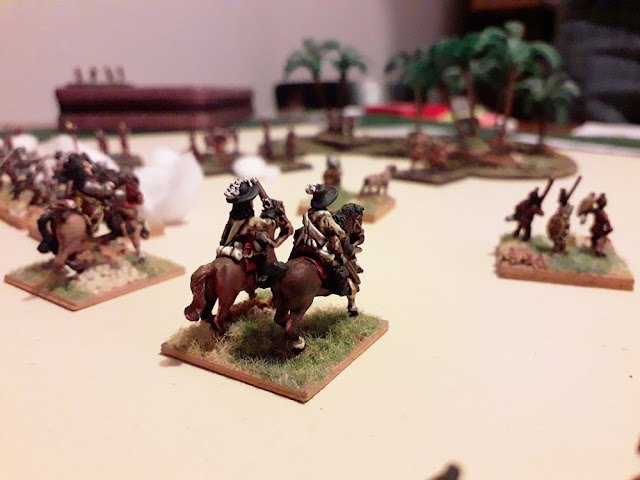 One hidalgo company managed to line up a perfect charge against the flank of a unit of Coureur des Bois that was already engaged in melee to their front against some Spanish militia shot. The coureurs scattered and fled - as the hidalgos pursued them, they crashed into the flank of a unit of French Indian scouts, causing them too to scatter and flee. Unfortunately, the hidalgos continued their charge, pursuing their fleeing foes right off the battlefield...

If the French half-pikemen were still in the battle they may have been able to prevent the hidalgos having free reign over the open ground. However, while they were outside of their lord's command range, their captain decided to turn his men around and lead them away from battle. 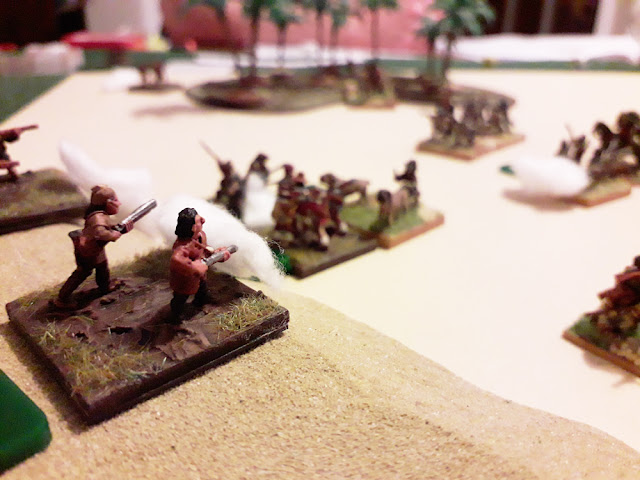 Two companies of coureurs made it across to occupy one of the Spanish hills, charging down the slope into the armed mobs, they fought valiantly but wavered and fell back up to the heights. Having disengaged from their melee, the French hunters now became valid targets for the Spanish artillery. 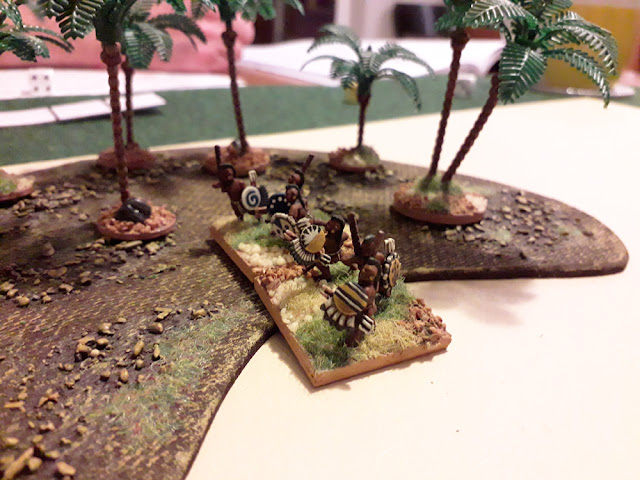 As the Spanish ordnance caused the coureur's the scatter, the Spanish Indian mercenaries finally chased off the last Frenchmen from the woods and the day was won for His Most Catholic Majesty and his New World order.