We had a busy weekend playtesting Fantastic Battles over the wonder of the internet to ensure that we simultaneously stayed dry and respected social distancing.

Jim (and his cat, obscured though she was in the photo) took on the role of halfling warlord, while Joel (avec hound) played as the great goblin. I was impartially pushing figures around on the table at their respective instruction. 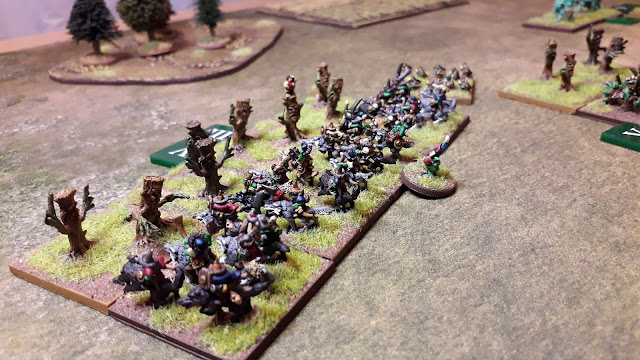 There was an early (hard fought) scrap in the woods between the halfling poulty scouts and the goblin warlord mounted on his wyvern, supported by bat- and spider-riding goblins. Unfortunately not captured by the battlefield correspondent. On the opposite flank, the woods can alive to halt the advance of a massed unit of goblin wolf-riders. 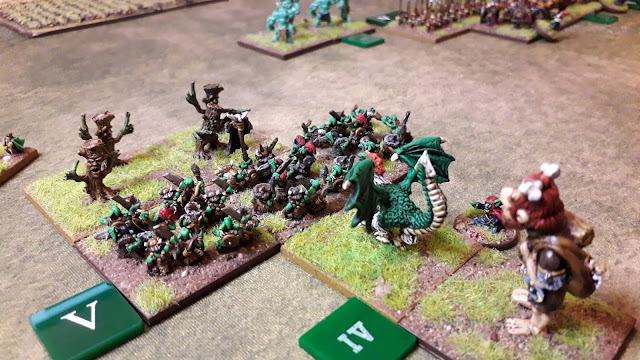 In the (left of) centre, more treefolk engaged a unit of goblin warriors from the front, while the halfling-friendly cockatrice flew over to attack the same unit in the rear. In a desperate attempt to stop his centre crumbling, Joel them through a giant and a goblin captain in against the distracted chicken-monster. 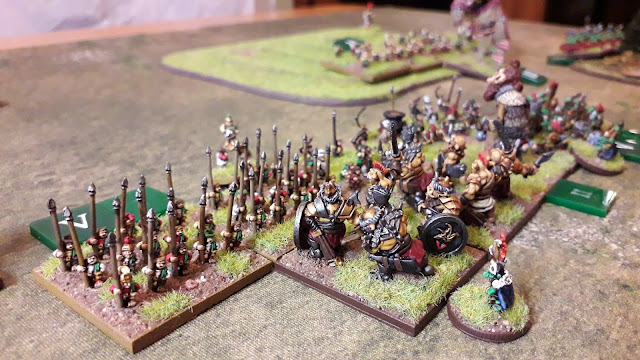 Also in the centre (but more to the right), the halfling Hearthguard and kitchen militia stood to receive a charge of orges, a giant, and a unit of goblin madcaps - hopped up on magic mushrooms. 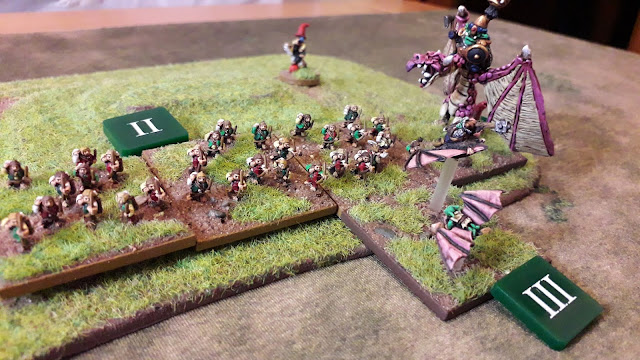 And on the left, the wyvern and bat riders made it through the woods to attack a unit of halfling archers on the hill.

The game ended in the mutual destruction of both armies. The goblins were, perhaps, in a slightly more comfortable position, but neither army would be capable of another battle - very much a Pyrrhic defeat to coin a phrase. The feedback though, was rather complimentary:

Joel: "Great game last night chaps. My plan was to use the tree line to mask the approach of the bats and wyvern. The spider riders were to push through but I didn't think his geese would have held me back as long. In the centre I wanted the hard units to march up the centre with weaker goblins and madcaps to soak up archery. On the left flank I wanted the wolves to smash into the hardest unit in Jim’s army. Which they did admirably considering how hard the treemen were. Overall a very flavourful ruleset in that you can customise the units to feel right. My imagination has been flaring over what I can build. That’s nothing but good."

Jim: "I was very pleased with how long the poultry platoon held out. The benefit of getting into the trees and holding you there. Ponies did ok, but I should have had them on the other flank supporting the treefolk. My centre held not too badly. Although my over enthusiasm with Rosie and the Truffle Hunters left them horribly exposed. Sitting down today to start painting up and sorting out living quarters for my Byzantine-Iernians. A wee dun and small town to start. Then, maybe, in the spirit of entente cordiale, a Ziggurat and surrounding town! Oh! Oh! Some orc and goblin zits. An idea I have been sitting on for 40 years. More will be revealed by the Dark Architect in due course."

So Joel has since bought not one, but two armies, and Jim has been working on his existing Dark Ages-inspired force, as well as more terrain. That's a pretty positive response in my books.

In the next round, Brett took on the command of the goblings, while I led the night elves of Moonspire. This was a smaller battle at only 700 points with 16 companies a piece (the goblings had many more characters). 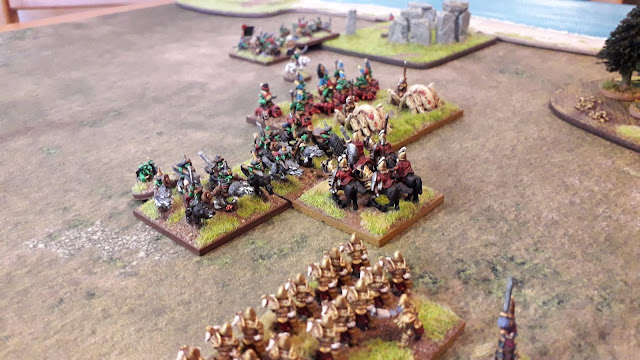 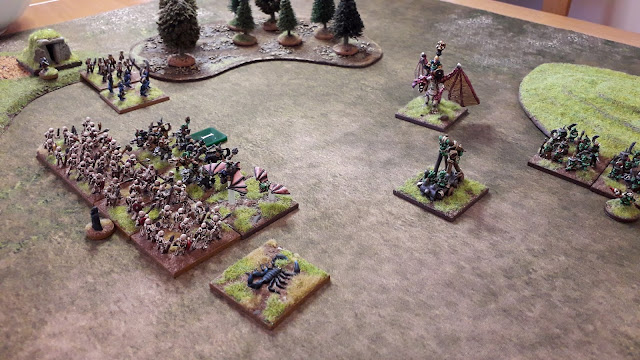 More wolf-riders and bat-riders assault the undead thralls holding the left of the night elf line. 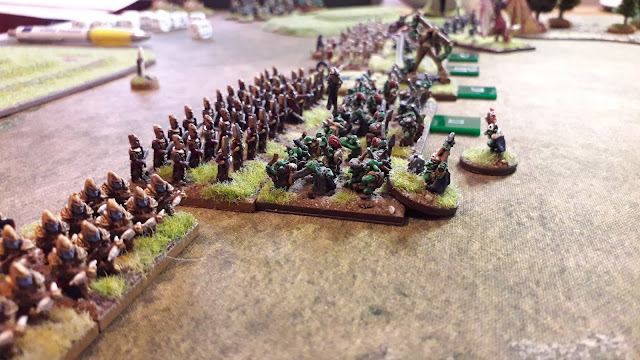 Eternal enemies, a horde of goblin warriors hurl themselves against the disciplined ranks of the night elf swordsmen.

Despite loosing both flanks to the goblin assault, the night elf centre stood firm and the goblin army scattered as a great flood of resolve loss cascaded through their ranks. This battle was another smooth run through of the rules proving that they are now in a pretty stable state. We did discuss rallying and magic in the game at some length, and have a few tweaks in mind to make it more interesting!