More Irregular play testing (and a 3 for 3 result!)

That's right, we tested out three of the new scenarios of Irregular Wars: Conflict at the World's End last night - and I continue to be hampered by the author's curse. Three games, three losses. Not entirely discouraging though as we nutted out a few more little issues with the scenarios and had many laughs in the process. My thanks to Steve Webb at the Southern Battle Gamers (here) for once again teaching me how to play the game.
First up we played the 'punitive raid' scenario. The aim of the game is for the attacker to burn down as many of the opponents buildings as possible in the allocated time. As the Irish attacker, it was up to me to try to send the English home to their smelly queen. Unfortunately we didn't quite balance the game properly and the village was deployed during deployment rather than during terrain placement (a very silly oversight).
As a result, the English naturally deployed in such a way as to block my approach. My chances were further hampered when I rolled atrociously for disease and mishaps before the first turn and ended up with a sick battle, scattered through some captains being impatient and others late...
As the game progressed, it became clear that  the poor Irish stood little chance. I did manage to draw his line beyond the protection of the village walls, and in a fairly rash decision, sent two unengaged companies of kern on a wild outflanking maneuver. 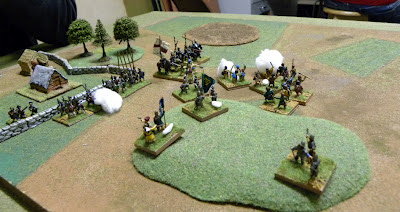 ****
The second game was 'reive and retrieve' in which the vile indigenies tried to steal my honest Dutch sheep. The Dutch were outnumbered (not for the first time) but the game looked to be a close one. We only had a single flock of sheep (something which won't happen again) who started between the two lines. As part of the disease and mishap roles, the native priest was bought off by the Duth agents and left the battle field. Not a bad way to start the game.

****
The third game was 'ambush'. The English were doing the ambushing and so decided that minimal terrain would be required. Honestly, who ambushes on flat terrain...?
All in all, a series of fun battles in which I was most undeniably bested. The new scenarios do appear to work well on the whole. We believe that with a tiny bit more tweaking, the raiding scenarios will work well. The ambush seems to be pretty good already. Stay tuned for more... but don't hold your breath the whole time....