Bread and Circuses - The Hare and the Tortoise

Just before Christmas we ran the last playtest of the year for the wee chariot game I've been working on, Bread and Circuses. I would suggest that with the feedback received from playtesters (a big 'heads up' to Tim for the most comprehensive reporting), the game is nearing completion.

This game was a simple twice-round-the-basic-track race with six competitors. There are a number of fixed 'classes' that players assign to their chariots, allowing the game to be used in any race setting they like. With the exception of the standard class (which is ... well ... standard), each class has a unique bonus and a corresponding penalty. 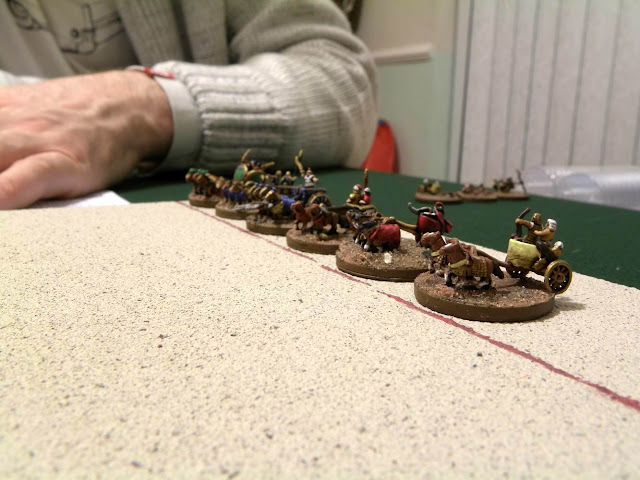 The starting line up. From the right/closest the camera: an Egyptian (archer), Roman (fast), Mycenaean (standard), Seleukid (scythed), Sumerian (heavy), and Indian (archer). The only extant chariot class that was not represented in this race was the 'agile'. 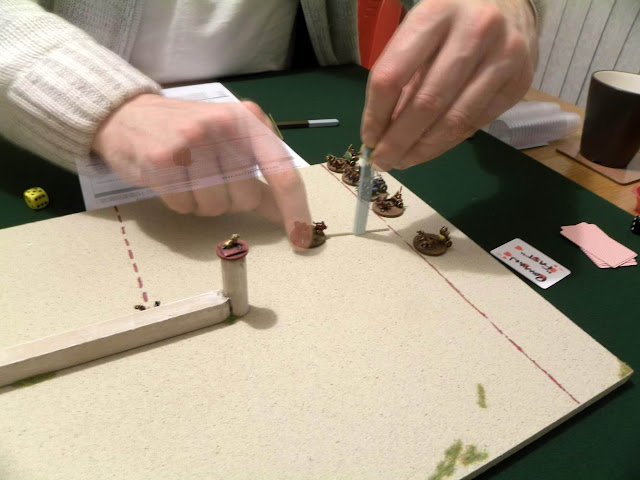 Player order each bound is card-driven meaning that you never know when it's your time to shine. The fast Roman chariot was the first to move away from the starting line. Using his swift propero (second movement), it seemed he was off with a flying lead. 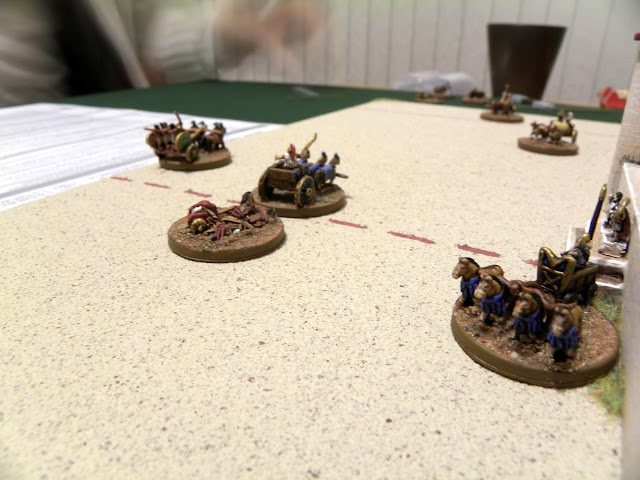 However, other players can be a distracting influence. Before the end of the first bound (you can see here the Mycenaean chariot still hasn't moved away from the starting line), all was turmoil. The Sumerian plodder was now out in front. The Roman chariot has been overturned in a collision with the Seleukid who has spun out. The Indian archer has also spun out after colliding with the edge of the track. Hanging out towards the back of the pack, you may just be able to make out the cheeky grin on the Egyptian archer's face as he puts his bow back in its case. 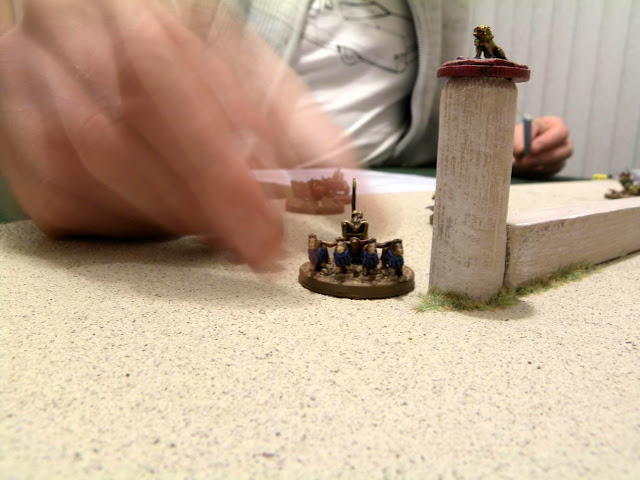 The first chariot to round the turning post was, rather surprisingly, the heavy Sumerian. Heavy chariots have a slower propero move than other competitors, but this race was looking to be a bit of an allegory for the 'Hare and the Tortoise'. 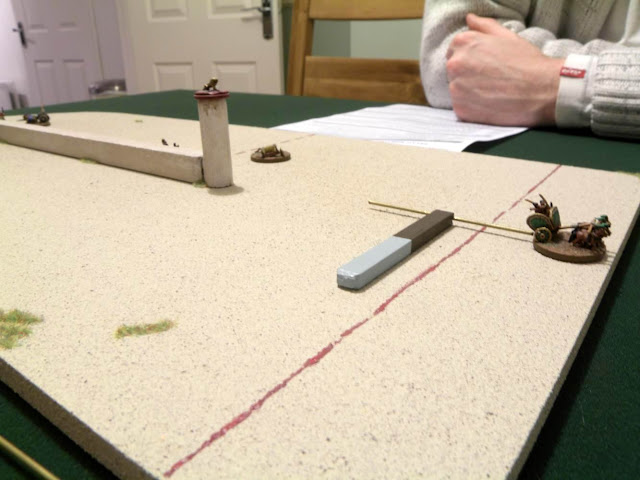 Meanwhile, a number of bad/disastrous dice rolls over several turns saw the Indian archer unable to complete a simple u-turn. You can also see the wreckage of the Egyptian archer in the background who got his comeuppance after the destruction he had caused in turn one. 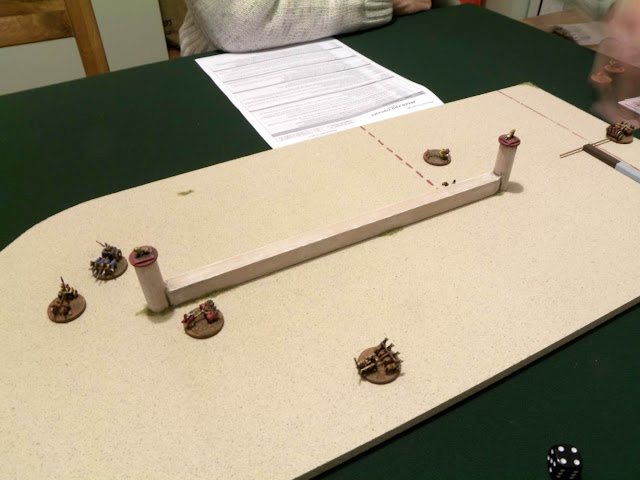 At the other end of the track, the Roman chariot, having swiftly recovered from his crash, was able to take a remarkably sharp turn and is fast catching up on the Sumerian (still out in front but on the outside of the track). The Mycenaean is just in third position while the Seleukid scythed chariot brings up the rear of the group. 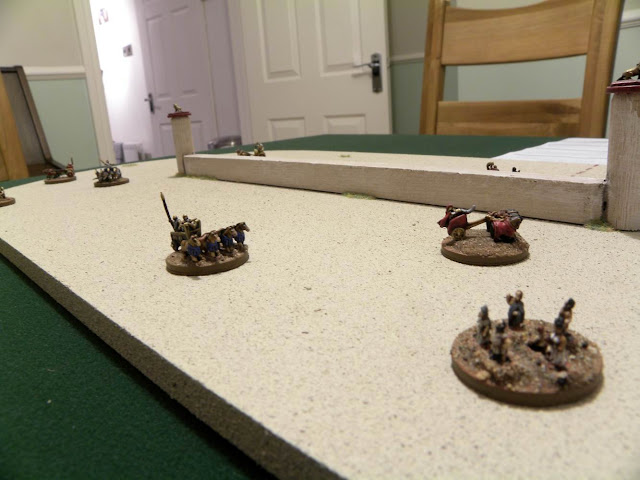 As the chariots approached the end of the second straight, some terrible driving incited the mob who started to run onto the track in disgust. The Roman, pursued closely by the Sumerian, used his speed to nip out in front... 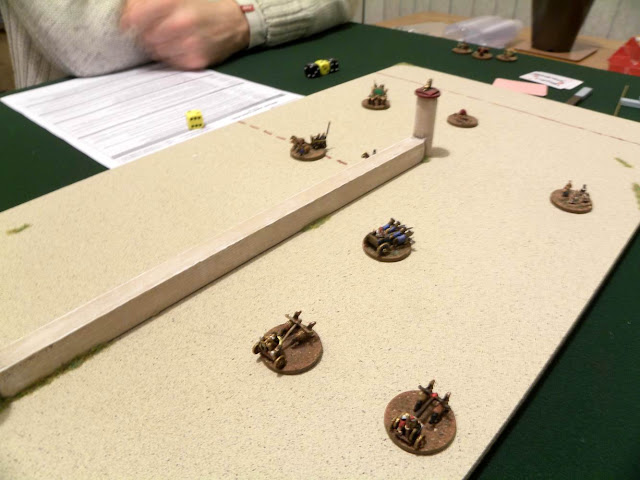 Only to crash again on the turn, allowing the Sumerian to plod on by, being the first to complete lap one. Here you can see that the Egyptian chariot has managed to catch up with the main pack, while the Mycenaean has dropped back into fifth position. The Indian archer has finally completed their u-turn, but is now almost a full lap behind everyone else. 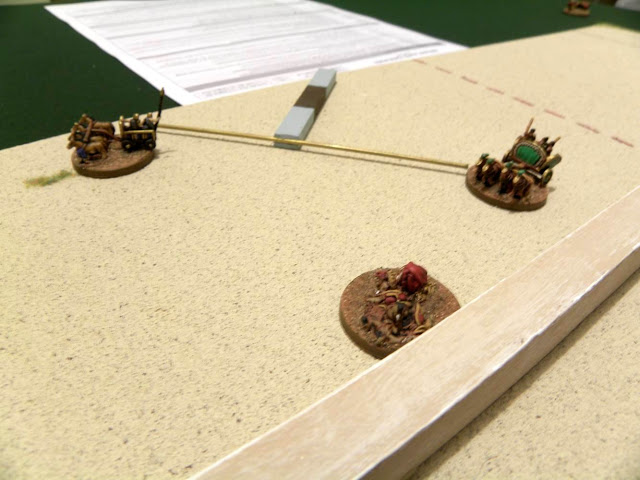 The Roman flipped his chariot again, but poor choices saw him collide with the Sumerian and ricochet into the centre wall. Meanwhile, the Indian advanced and started loosing arrows at the already distracted heavy Sumerian battle cart. 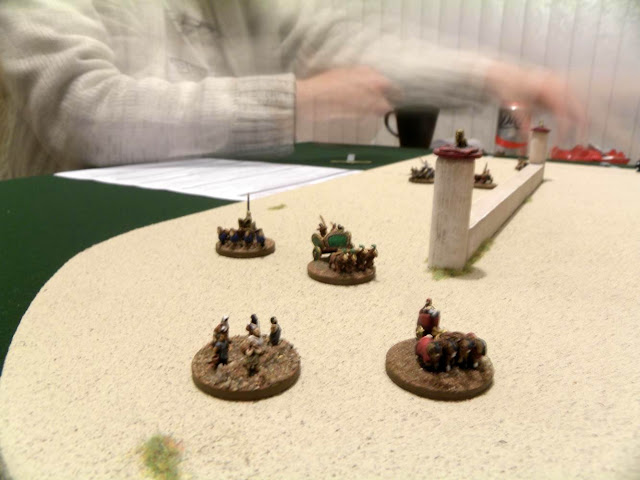 Coming up towards the turning post again, leading to the final stretch, the Roman fast chariot was once again in the lead, still slowly pursued by the heavy Sumerian and now also shadowed by the lapped Indian. 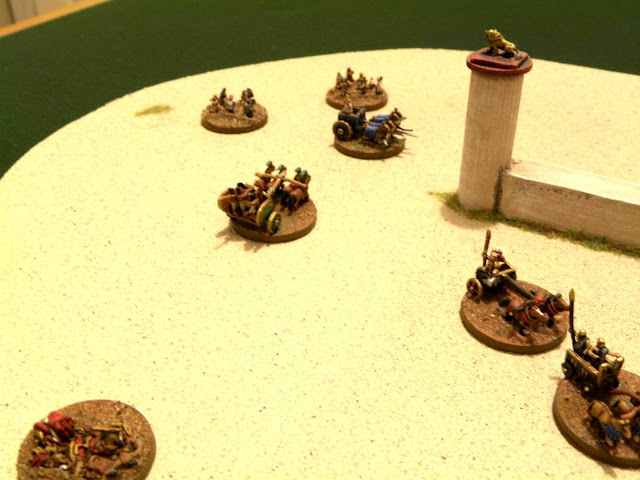 More angry mobs spilled onto the track during this second lap as driver fatigue led to more inciting mistakes. Here you can see that the Roman chariot has crashed - again! - after plowing into one group of angry bystanders. The Seleukid scythed chariot and the Indian archer have also both spun out after similar collisions. Driving through a mob disperses it, but it is never going to be a good choice. Out of the carnage, the heavy Sumerian chariot pulls once more into the lead, followed closely by the Mycenaean in his 'standard' chariot. 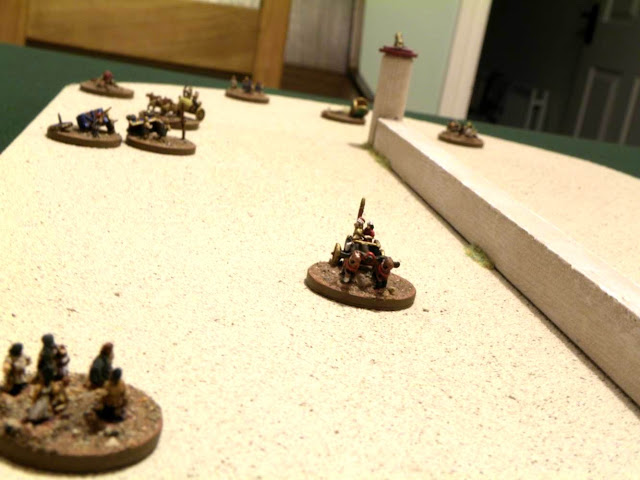 ... and then the Mycenaean was out there all alone. The Seleukid scythed chariot and the Sumerian heavy got all tangled up together. The Egyptian archer has emerged around the turning point in the background, but the Roman chariot and the Indian (now crashed) were both having trouble righting their vehicles at this point. 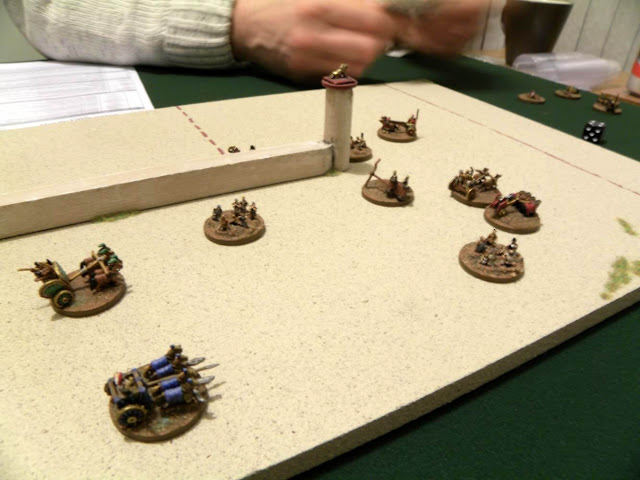 Although able to recover and swiftly catch up, the Roman was now fast enough to catch the Mycenaean who swung around the last turn, heading for the finish line. The Sumerian has managed to crash in a most inconvenient spot, and the mobs were closing in. The Egyptian has managed to get in on the inside of the less maneuverable Roman vehicle, while the Seleukid and Indian chariots are still hanging back. 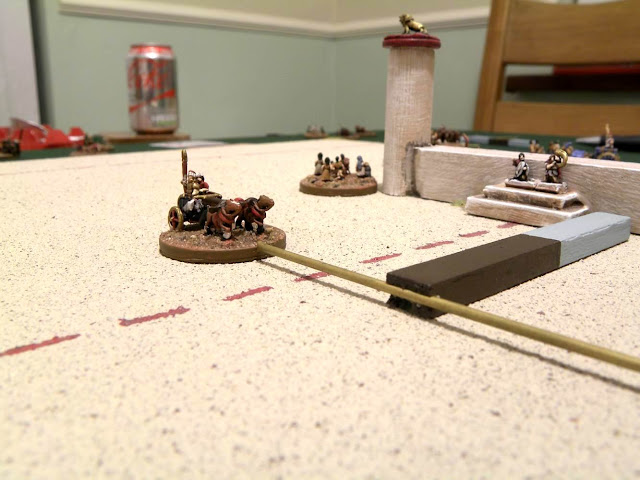 With unexpected alacrity, the Mycenaean  chariot crosses the finish line to win the race, getting the prize (and the ladies). To the victor goes the spoils! Considering he was the last chariot away from the starting blocks, and was in the middle to the back of the pack for most of the race, it was a pleasant surprise to see him negotiate his way through the wreckage to win. 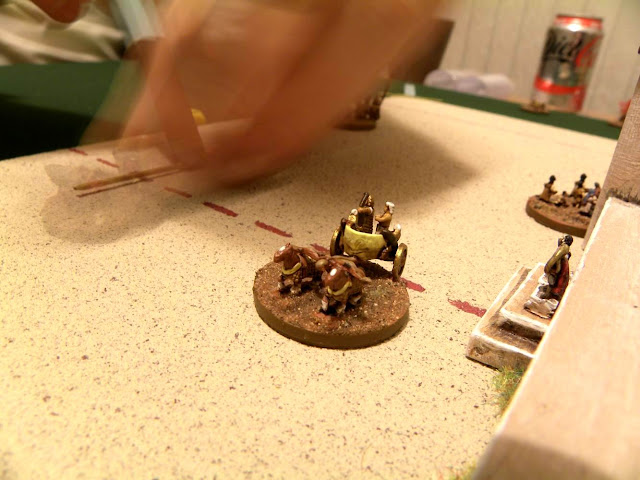 Second place went to the Egyptian archer, followed by the not-as-fast-as-he-could-have-been Roman chariot in third. The Indian chariot got the wooden spoon for this race. Not only was he the last to cross the line, but he was lapped by every other chariot in the race.

It was a fun and nail-bitingly-exciting way to end the year's chariot playtesting. We played more Galleys & Galleons after that, but by that stage of the evening my ability to focus my camera had gone the way of my dice rolls.....