"By the pleasant calves of Artemis!" An OGAM AAR.

This week I managed to get over to the Old Fogeys gaming den for a great introduction to Of Gods and Mortals, the mythology-based skirmish game by Andrea Sfiligoi. I pitted my Greco-Macedonians under the patronage of Artemis, goddess of the hunt, against Jim's Hiberno-Celts led by the shining god Lugh of the Long Hand.

We decided to play a simple 'come get some' fight. Jim, as the defender, placed a couple of hills, a Celtic village and a field of ripening grain. Then we deployed. The forces are outlined below - I'll only give gamey details where the profiles were not taken directly from the book.

The Followers of Lugh
The Celts were tyranised by Lugh, along with his cronies Cu Chullain, Maebh (using the Ferdiad profile), and a druid, oppressing 8x Celtic nobles, 6x Celtic warriors and 6x warhounds.

How the game played out... 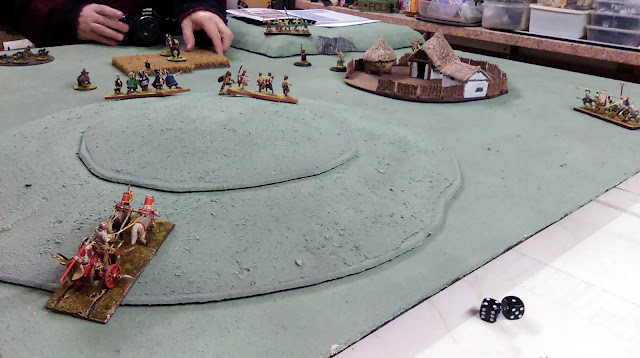 In this shot you can just about make out the deployment. The Greek mortals massed on the hill with Artemis and the centaur in the rough, looking to snipe away at the Celtic warriors. The Celtic forces were much more spread out with Cu Chullain attempting an outflanking maneuver from behind the hill. Just as we were about to start, Jim's druid used his Illusionist skill to remove the field that Artemis was using for cover. That annoyed her just a little bit. The Celts were about to feel her arrow-y wrath! 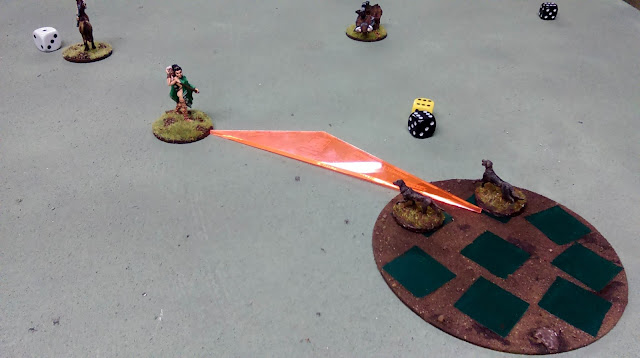 Artemis' first move, buoyed up by invocating hypaspists, was to swing around to the wardogs placed behind her. Using her ability to shoot multiple times in one turn, she unleashed a hail of arrows at the dogs, killing four of the six. 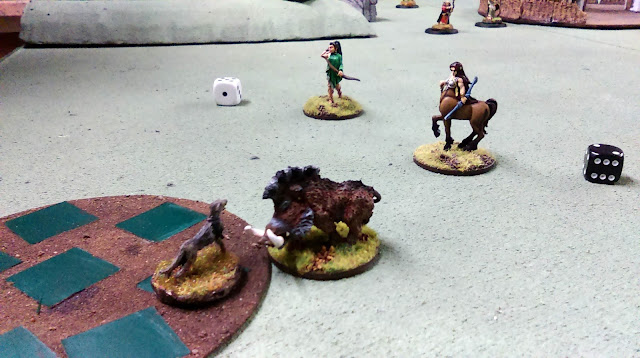 The centaur then moved up in support and took down another, before the final pup was charged and forced to recoil by the Kalydonian Boar. 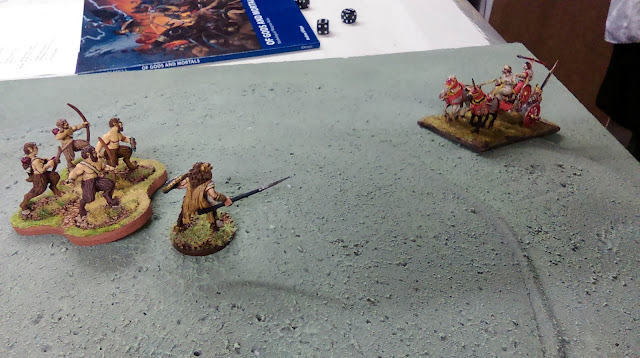 Up on the hill. Herakles and the satyrs moved into a position to be able to tackle Cu Chullain should he try anything tricksy. 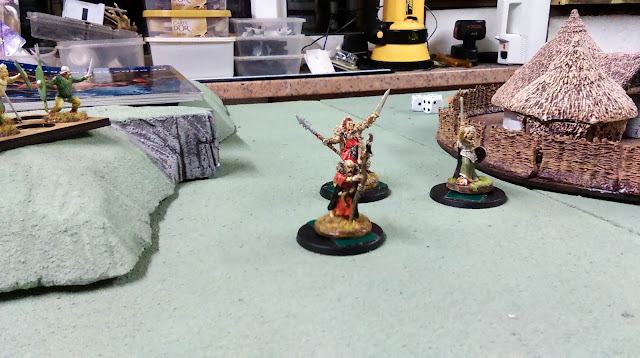 For the Celtic first turn, the druid rolled a turn over. Back to the Greeks. 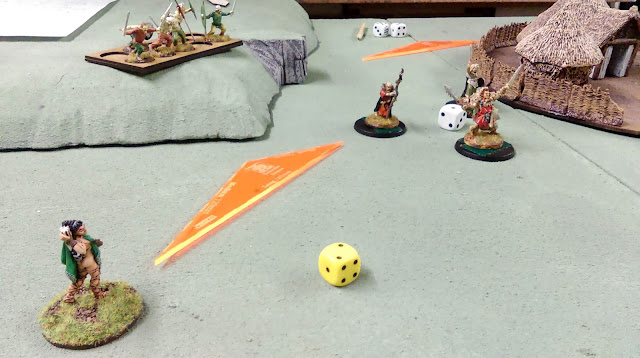 Artemis, still raging about her missing field, turned back on the cluster of Celtic god and legends, aimed well and true, and took down the druid in a single shot. That will teach him. 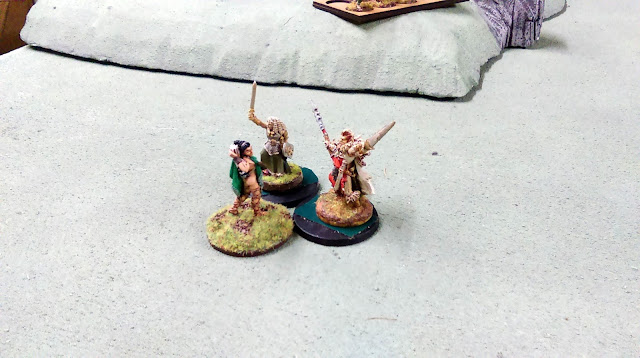 However... it also left more than her right buttock horribly exposed and she was then charged and pinned by Lugh, while Maebh delivered a well placed sword blade, promptly dispatching my leggy lovely. 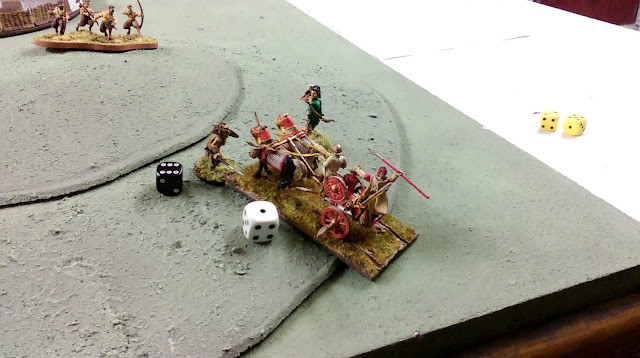 However, praised be to the devotion of her followers, Artemis was almost immediately brought back into play, and at the other end of the table. Now it was her turn to pin Cu Chullain, before Herakles ambled down the hill... 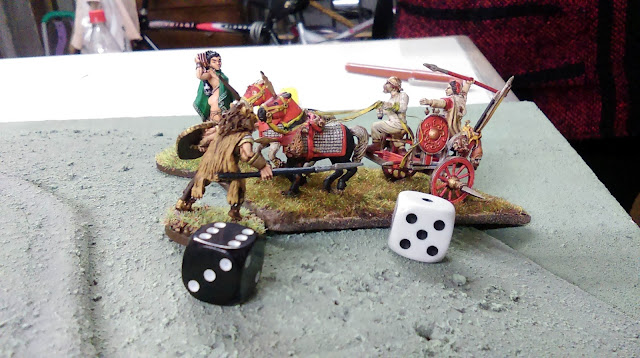 ...to give the Ulster hero a damn good seeing to. The 6/1 split left the modified scores at 14:4 in favour of the big lad in the lion skin. 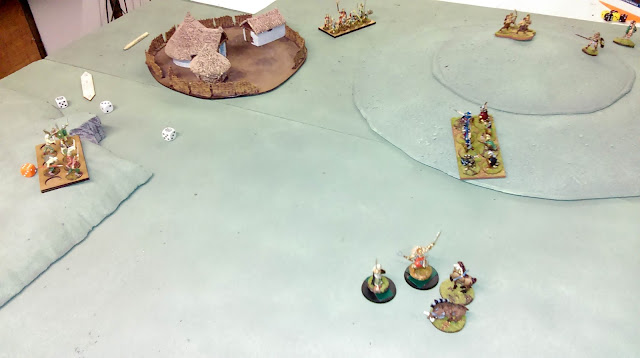 By this stage, Maebh and Lugh were glowereing in an unsavoury manner at the good lady centaur. The hypastists started making their way down the hill to provide some support, but were nowhere near fast enough. 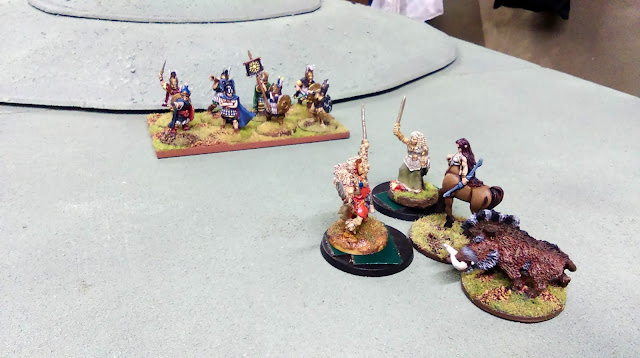 The centauris was quickly killed, before Lugh turned his attention to the mortals. I think by this stage he was sick of their ability to invocate (turning Artemis into a one-goddess artillery battery) and thought he'd do something about it. 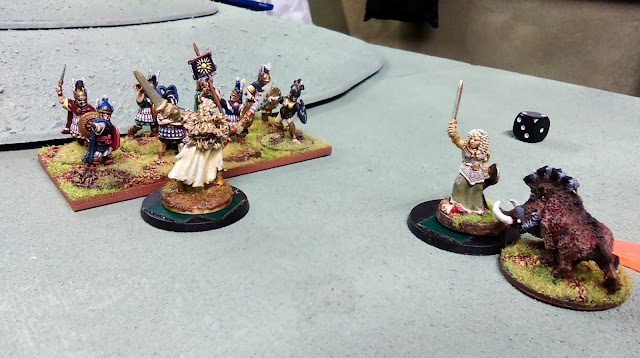 Foolishly (in retrospect), Maebh stayed behind to take on the boar. 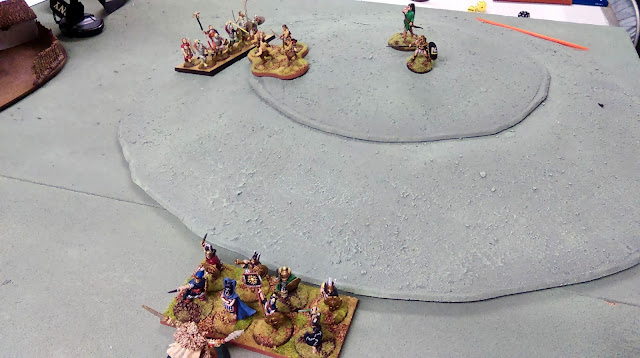 The Celtic nobles finally remembered they were in the game and started up the hill, making it to just
a few feet of the satyrs. 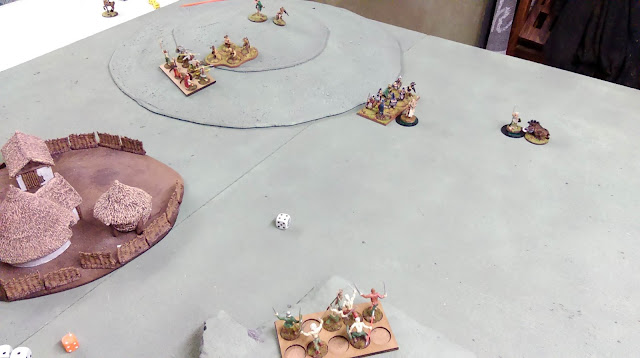 Meanwhile, the Celtic warriors continued to hurl their own invocations in the general direction of Lugh, but were otherwise quite happy on their own hill. 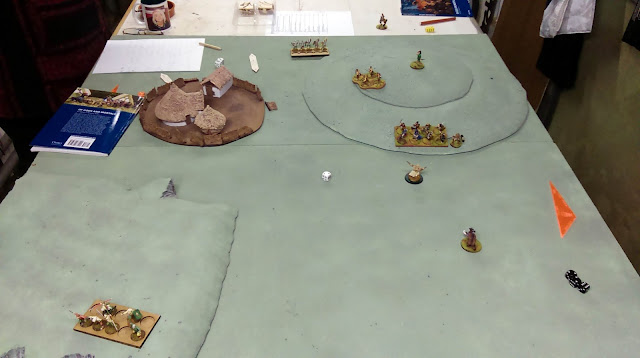 What followed, can only be called the massacre-that-broke-the-camels-back. The satyrs took down one of the Celtic nobles with a point blank arrow to the face. Artemis then unleased another small hail of fire to take down two more. down on the plain, the Kalydonian Boar and Maebh continued their struggle, until Maebh got tusked in an undignified manner and was removed from the table.

On seeing that, the remaining mortal units both backed away to their respective table edges and Lugh conceeded his infinite insignificance in the face of Fair-Rumped Artemis, the Lady of the Bow. 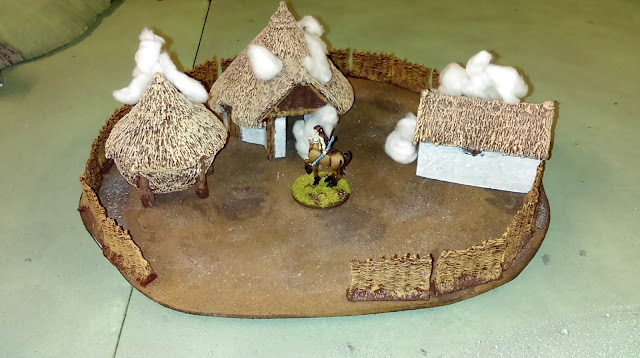 In memory of the only fallen Greek, the Celtic village was burned as the centaur's funerary pyre.

It was a cracking good game, and Jim can only be commended for his good grace and gamesmanship in the face of an inordinate number of sixes. I'm certain I have never rolled that many sixes in a game before, and I doubt that I will again, but what an introduction to the rules!