Wargaming mate Mark, now a solo gamer in Thailand, has sent through another of his cracking scenarios/battle reports for Galleys & Galleons. His last account can be found HERE.

The scenario:
The KhiNok islands, located in the Sondonesian archipelago, are a major source of the birds' nests so prized as delicacies by upwardly mobile members of the Chinese ruling class. No one knows how the birds feel about this. Every year local men risk life and limb in the caves on crazy bamboo scaffolds to harvest the sticky nests.

The islands are controlled by a syndicate of Chinese pirates, with shady backing from the Pearl River merchants, and the resource is jealously protected. An annual convoy, heavily escorted, carries the harvest back to China.

The Portuguese have long had their eyes on this prize, but lacked the means to grasp it. Now the new Viceroy of Malacca (none other than Don Marco da Pattaya, in an amazing comeback, maybe the story will be told one day) has brought reinforcements and plans to use them to seize the KhiNok monopoly.

If the Portuguese can take control, they will have an alternative commodity to trade into China, much more convenient than lugging bar silver all the way from Lisbon. The profits, potentially, are enormous.

Don Marco's plan is to strike while the convoy is loading this year's shipment, so as to capture both the islands and the latest harvest. However this bold initiative means attacking while the pirate escort is present at maximum strength. It's a high stakes gamble, typical of a commander who was probably shot by his own side in his last battle.

If the Portuguese can land drilled soldiers, and their fleet can command the surrounding water for now, it is understood they will take control, and build a fort that will enable them to repel Chinese attempts to recapture the KhiNoks.

A note about the Portuguese ships: the Sa Isabella is carrying drilled soldiers on this mission; they are to be the garrison of the islands after they have been captured. I have given the other Portuguese ships strong gunnery factors, to represent their key strength in East Indian waters against 'native' enemies.

Victory conditions:
The Portuguese must capture the islands by landing soldiers and driving off the enemy pirate ships, and if possible also capturing some or all of the convoy. But losses must be kept to a minimum as resources are scanty and cannot easily be replaced. The Chinese must prevent a Portuguese landing at all costs, and save the convoy if they can. Only convoy departures off the N edge of the table count as 'saves', because going in any other direction risks capture by other pirates, Dyaks etc. But pirate ship losses mean nothing as they are easily replaced. 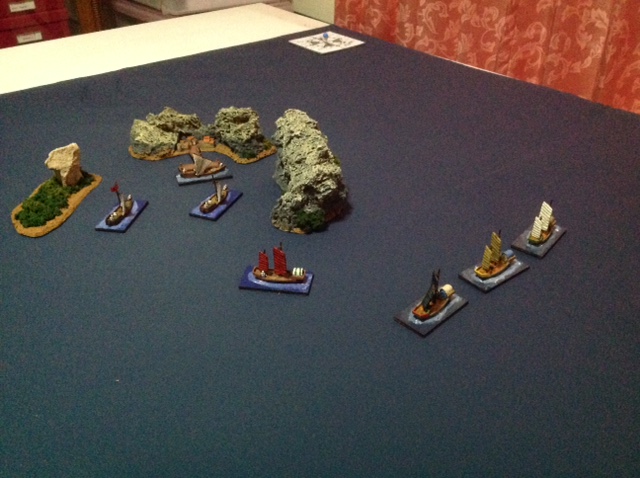 The photo above (taken by an Portuguese albatross drone) shows the main island of the KhiNok group with the assembled convoy of three dhows, and the escort of four pirate junks. Little do they know Don Marco's squadron is just over the horizon. 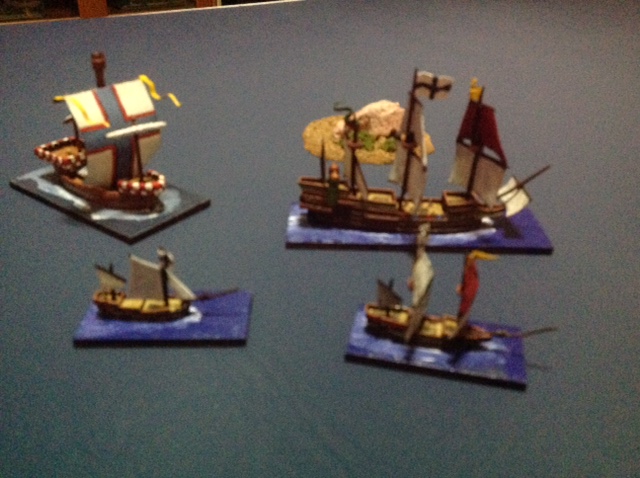 How it really happened:Don Marco's attack seemed to have achieved tactical surprise, as the Portuguese squadron closed on the islands from the WNW, running as close to the wind as they could to hold the weather gauge. Don Marco's plan was for the weather column (Santa Isabella and Moscado) to keep a steady course to the N of the islands and then turn S into the harbour to land the troops. With a bit of luck they might capture some of the convoy on the way. The lee column (Santa Caterina and Santa Barbara) with the strong ships was to carry the fight to the pirates and destroy them using superior gunnery.

The Portuguese were spotted by a lockout on top of the KhiNok mountain, and the Chinese reaction was swift. The dhows exited the islands through the narrow eastern passage and began to tack to the north to make their escape. Eventually all got away, but one of them was crippled by gunfire before it crossed the board edge. In retrospect I let them start their moves too soon, there should have been some delays before they were allowed to sail. It was too easy for them to get away and the junks did not have to face the problem of defending them.

The pirate junks headed NW to take on the Portuguese, aiming to force boarding actions, if possible ganging up on one or more enemies. 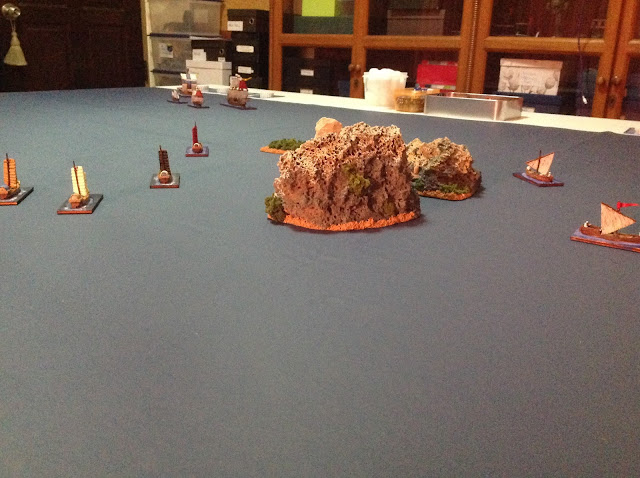 This photo shows the opening moves of the battle, from the Chinese perspective. The dhows are escaping at R. The pirate junks are closing the approaching Portuguese squadron to L of the islands

Initially Don Marco's plan seemed to be proceeding as he had foreseen. The initial broadside from the Portuguese galleon sank the Bean Sprout outright (magazine explosion) and caused a fire on a neighbouring junk. But the pirates were not deterred and stuck to their plan of closing as fast as possible. Don Marco then made what in hindsight might not have been the smartest move - he reversed course with the galleon and frigate. It seemed like a good idea at the time, as the lumbering carrack Santa Isabella, falling behind the rest of the squadron, was beginning to look isolated and vulnerable to a pirate onslaught. 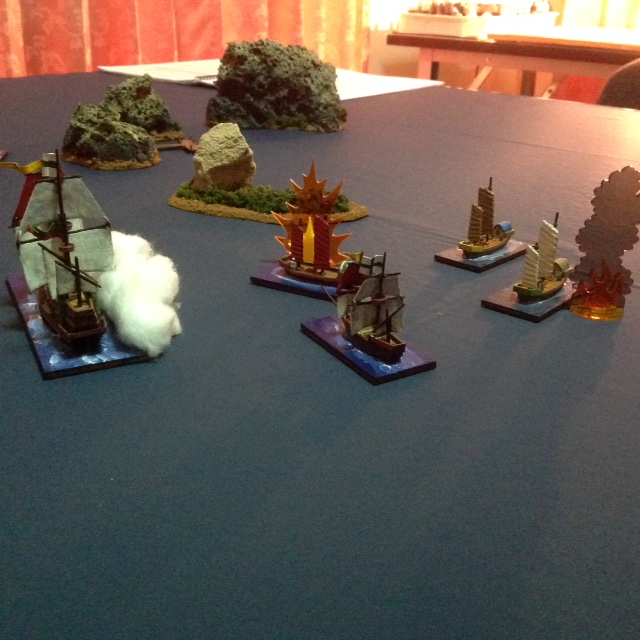 Portuguese gunfire initially was very effective, but Don Marco's tactical handling left something to be desired. Here the galleon Sa Caterina blasts a pirate junk out of the water with a single broadside. But the small frigate Sa Barbara is sailing into dangerous proximity to the bloodthirsty boarding pirates.

But the manoeuvre allowed the pirates to close and board the Santa Barbara frigate. She was captured by two junks, who however did not put a prize crew aboard (not wanting to weaken their remaining fighting strength). The two junks then cast off and attacked the galleon Santa Caterina, and the third surviving junk joined in.

The crew of the galleon fought heroically - led by Don Marco himself naturally - and held off the attackers for several turns, causing serious damage to two of the attackers. In the end the Sa Caterina was captured, but only briefly because help was at hand! The ships of the weather column had been "sailing to the sound of the cutlasses" and arrived just in time to capture two of the three remaining pirate junks, and recapture both the Sa Barbara and Sa Caterina. 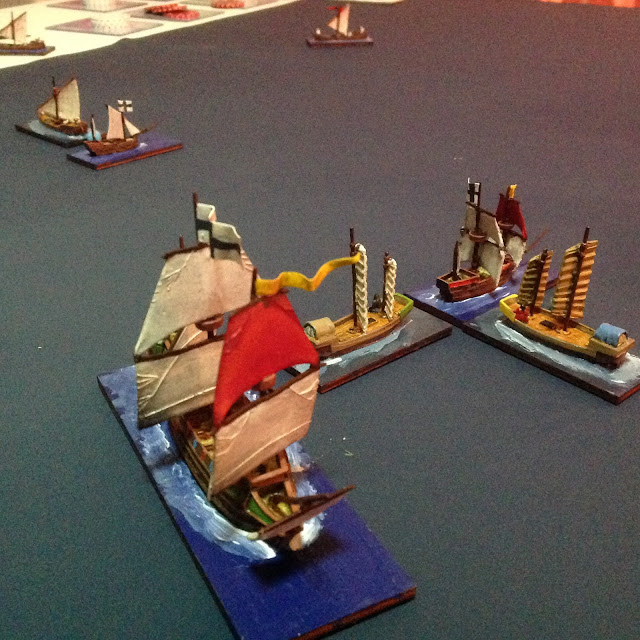 In the above photo, the frigate Sa Barbara is attacked and captured by two pirate junks. The big galleon cannot fire support into an active boarding action, and Don Marco failed to order close quarters support (it is said he was below in his staterooms at the time, trying on his armour). In the background, the dhows make their getaway, but not before one of them is raked by the Moscado.


Mark writes, "I improvised rules for captured ships abandoned by their captors (basically it takes time to get them up and running again). And I am pleased to report the final action of this game was a true "San Josef" moment. The crew of the little merchant brig Moscado, the smallest ship on either side, crossed the decks of an intervening enemy junk to counterattack the pirates who had taken the Santa Caterina.So, the nearest damn-run thing you ever saw in your life (as someone is going to say in the future) but Don Marco and Portugal have got all their ships back, wiped out three of the four pirates, and taken possession of the prized KhiNok islands! All those birds nests!