This man ran a whole fleet of canoes. What he did next will shock you!

Mark in Pattaya has sent through another Galleys & Galleons report. This time, he did something I've never seen it done before - a fleet composed entirely of canoes. See how they got on below!

It's been a long time since my last Galleys & Galleons game, so when an unexpected free evening came up recently I hauled out the ships and terrain. No time to plot anything fancy, so the anticipated return to action of Don Marco da Pattaya has been deferred. Instead a simple encounter battle between two squadrons will have to do!

The two sides are: 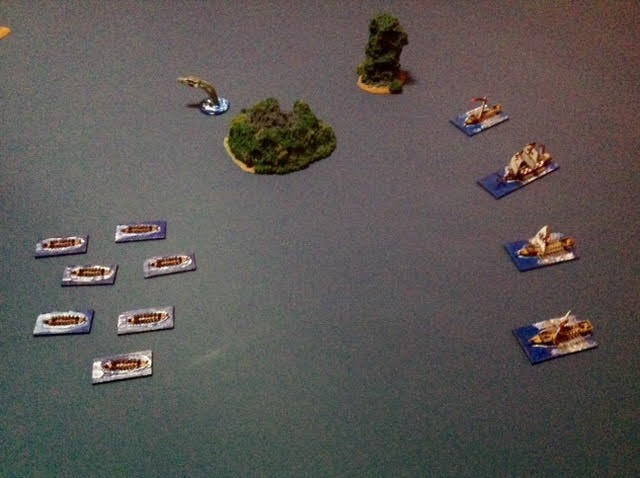 The Pirates were defenders and set a tabletop with two large Islands (and three sandbanks that were never in play) and a wind direction dead foul for the Knights. The wind only really affects the galeass, and it can use its sweeps to get along when the wind is unfavourable. All the other vessels on both sides are muscle powered and ignore the wind. So for the whole game I didn't bother checking for changes in wind direction and let it blow steadily down the table (ENE for the log books).

The first photo below shows the two squadrons approaching. Cecil the sea-serpent watches and waits ... will it be dinner time soon?

The Knights' plan is to use gunnery to cause as much damage to the war canoes as possible before ramming, and to prevent the pirates from attacking from a flank. The Pirates' plan is to gang up on individual galleys to overwhelm them, while avoiding the broadside firepower of the galeass.

Neither side was up for going around the Black Islands to outflank the enemy, probably because the canoes and the galeass were limited to a maximum of 2 x short moves per turn. The galleys, which could potentially move 2 x medium per turn, preferred to keep traditional line abreast formation.

The photo above shows the canoes rushing the S end of the Knights line (R of shot). The two foremost canoes (Te Arawa & Aoraki) have tried small-arms fire as they close with the galley  (Stella Artois) but to no effect. Now it's the Knights' turn. 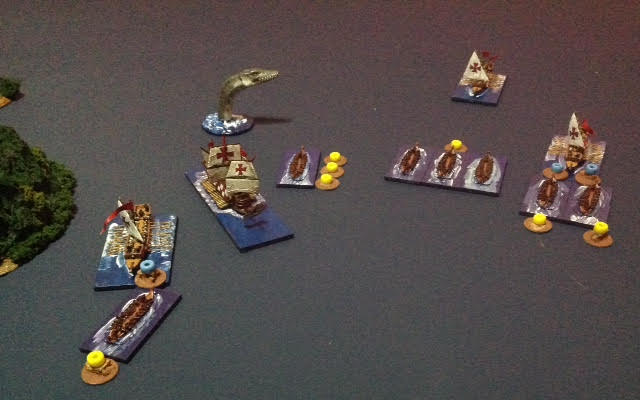 The Pirates attacked with great elan, and soon the battle was in full swing. The initial attack was unlucky not to cause any damage to the galleys from boarding, and the Knights seemed to gain the upper hand.

This photo shows the situation as the Pirate attack seems to falter. The yellow markers indicate damage (from gunfire or boarding actions) and the blue markers indicate vessels have grappled. One canoe has been severely damaged by broadside fire from the galeass (San Miguel). Cecil waits and watches. 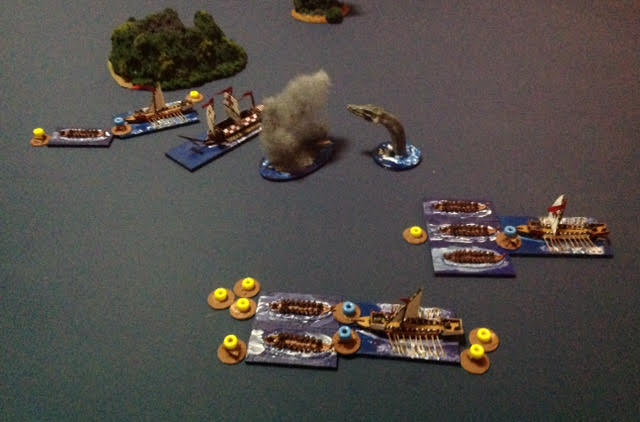 The Pirates fight on grimly and begin to inflict casualties on the Knights. The next photo shows how it's turning into a battle of attrition. I also wanted to show off one of my "vessel sunk" markers, where the San Miguel has sunk the canoe Ruapehu. Cecil comes to inspect the buffet.

And two or three moves later it has come to this ... Vessels sunk (1 canoe), and captured and moved out of the way (1 canoe, 1 galley), have been removed from the table, but the green "captured" markers show how the galley Cervesa, unmoved by the capture of the Stella Artois, has fought on magnificently. It's now badly damaged and new attackers are coming in on the flank. 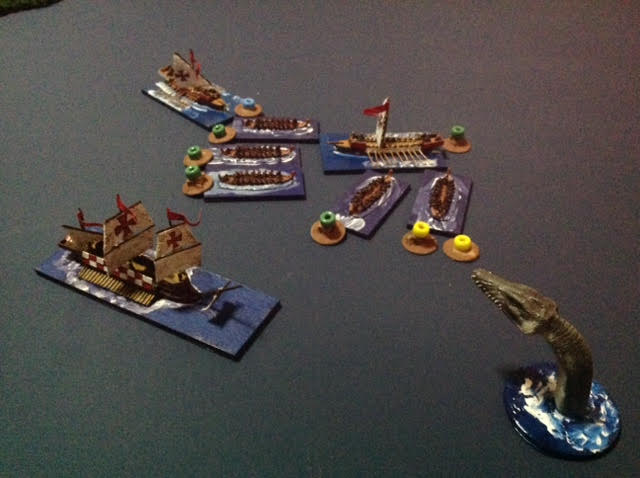 And here's the final position. The Cervesa was captured but not before taking out one more attacker. But the jig is up for the Pirates as the third galley (Corona) and the San Miguel come to the rescue. At this point the Pirates have only one Canoe left and the Knights have a galley and a galeass.

The Knights have sunk one canoe and captured five. The Pirates haven't sunk any opponents but have captured two galleys (at least one of which looks set to be recaptured).

I'm calling it a bloody but clear-cut victory for the Knights!