Thorfinn Hardluck and his crew

I decided some time ago, that what I really needed was a couple of vikings. Not a whole warband, and certainly not an army, but just a few, to scratch that Norse itch. Palaeo Diet: Eat or be Eaten gave me the perfect excuse! Mind you, they may also find their way onto a Song of Blades and Heroes table some time in the future. Allow me to present Jarl Thorfinn Hardluck, Thorvald the Touched, and Thorbjørn Bjarnason. All three are Norse dwarves from Macrocosm Miniatures - the pack is mysteriously called 'Ragnar's Crew', but I'm sure it has taken no inspiration from any TV shows...

I intentionally went looking for Norsemen with exaggerated features to fit in with the exaggerated feel of the rest of my Palaeo Diet stuff. These Macrocosm ones seemed to fit the bill, although there are presently no photos of them on the website. The sculpts are great, although some of the moulding lacked a little detail, only really noticeable around the ears and on the hands. I also note that while my pack had more than enough left hand options - it had one right hand too few. The jarl's sword hand was cut from the shield-maiden figure and reattached here. I didn't mind because I only wanted three hunters, and managed to put these together in a satisfactory manner. From my dealings with Macrocosm to date, I'm sure they would have sent me out a spare right hand or two had I asked for it. Thorbjørn's bow and quiver came from an unrelated plastic sprue.

As well as generic hunts, these hunters are destined for a Palaeo Diet mini-campaign that I am working on, titled Thorfinn's Saga, following the jarl's epic quest to find a magic ring and bring prosperity to his struggling people. Keep an eye out for more details on that in the future. For now, here are the lads:

Jarl Thorfinn Hardluck
Equipment: As appropriate for a man of his standing Thorfinn wields a well-wrought sword. The sword is treated as a Club (PDEE p.5). It can only be used against beasts or foes in base contact, but confers a +1 modifier to Thorfinn’s attack rolls.
Traits: Thorfinn is the ruler of his people and insists on leading from the front, an attitude that has made him Crotchety (PDEE p.13). Nevertheless, his experience (and the fortune of having inherited some armour) has forged Thorfinn into a formidable warrior, rendering him a Brute (PDEE p.13). 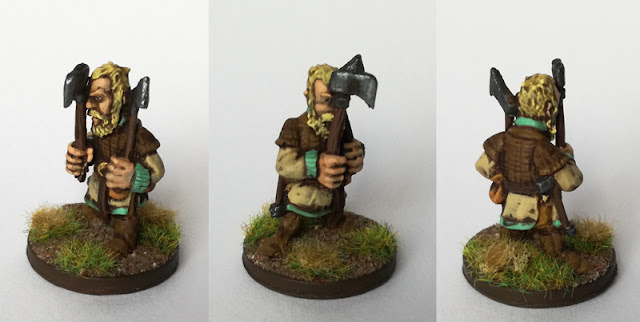 Thorvald the Touched
Equipment: Thorvald carries multiple axes which he throws at foes and wields in combat with equal skill. Axes are treated as Spears (PDEE p.5). They can be used against beasts or foes up to 1x Short distance away.
Traits: Touched by the gods and a little weird, Thorvald has knowledge of many natural and supernatural things. He is both a Healer (PDEE p.14) and a Thinker (PDEE p.14). 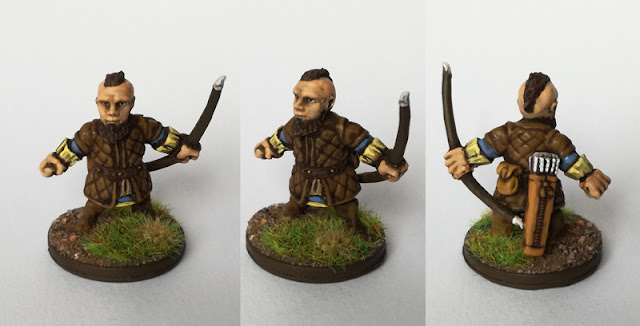 Thorbjørn Bjarnason
Equipment: Thorbjørn carries a bow. He may pelt beasts and foes up to 1x Long distance, but always suffers a -1 modifier to his pelting and attack rolls.
Traits: The youngest surviving member of Thorfinn’s household, Thorbjørn eager to prove his worth; he is therefore Excited (PDEE p.14). However, his skill with a bow is already spoken of highly, and Thorbjørn is known as a skilled Hunter (PDEE p.14).