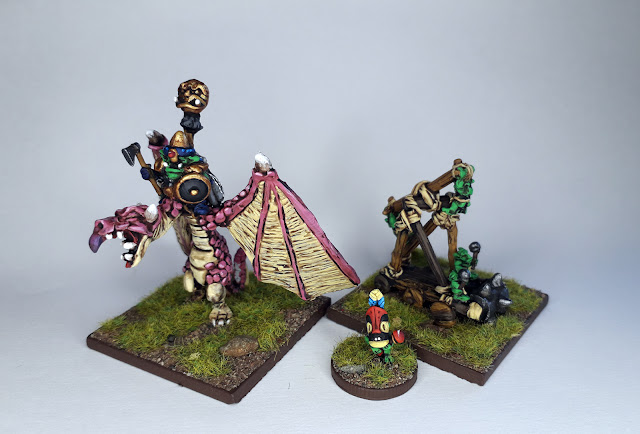 Before the age of pandemics and lockdowns, all-time-good-fellow Andrew and I placed a joint order with Cibo's Little Dudes, a independent sculptor/manufacturer in Switzerland. While the order arrived months ago - and Andrew has long since finished painting his ratman army - I only managed to get my hands on my little bit of the order over the weekend. Behold Skrotrot the Great Goblin on his wyvern, Skittles the shaman, and a goblin battle-wagon.

Technically sold as an orc warlord, I don't have any orcs in my army, so Skrotrot will have to assume the guise of great goblin in an 'under the Misty Mountains' kind of way. The model comes in several parts: the wyvern body with rider are all one, the rider's right hand and axe are a seperate piece, as is a feather for his helmet, along with the wyvern's head and wings. All pretty easy to assemble, although I added a little greenstuff around the wing joints as a precautionary measure, and some more around the head-neck joint where the join looked a bit... obvious. It is a lovely figure with great character. Some of the detailing on the rider was a bit shallow, but still clear enough to paint up. 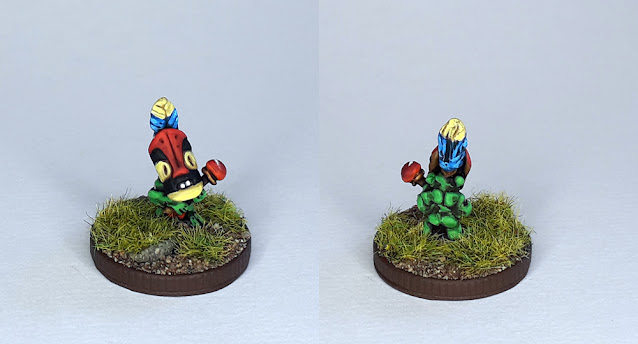 Skittles is not a separately available figure. He's actually an additional crew figure from the battle-wagon, but I needed an extra magic-user for the army, so gave him a tiki mask and the feather from the wyvern rider.

I love this battle-wagon. It was a real pain to fit together, coming in seven separate pieces (including the three crew). For some reason my glue was sticking my fingers together perfectly, but I struggled to get it to bind the bits of the wagon frame. In the end I used more greenstuff to wrap around the joints. They were already sculpted with rope bindings, so I don't think it harmed the aesthetic at all. The overall model is just so characteristically ad-hoc and gobliny, its great. I'm not sure how it is propelled - the see-saw/pump handle doesn't connect to anything - but I'm willing to overlook that for the fun. 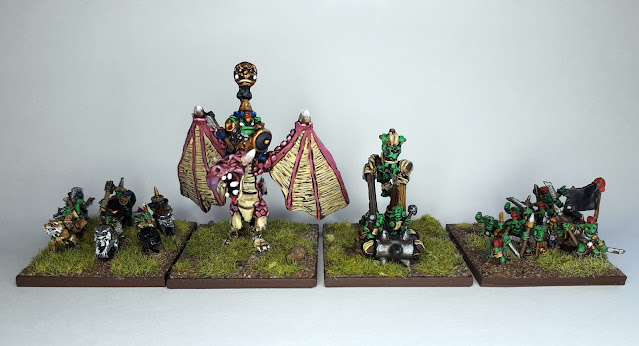 And here is an obligatory scale shot. From left to right: Warmaster wolf-riders, Cibo's wyvern and battle-wagon. and Polar Fox steppe goblins.

Overall I love this range. The sculpts have great character and the scale is spot on - slightly larger than Warmaster goblins, slightly smaller than Polar Fox, but all three are compatible. My only issue is the price point which seems to be matched more to OOP Warmaster stuff on eBay, making it pretty pricey compared to the likes of Pendraken, Magister Militum, Eureka or Copplestone.

Email ThisBlogThis!Share to TwitterShare to FacebookShare to Pinterest
Labels: Fantasy