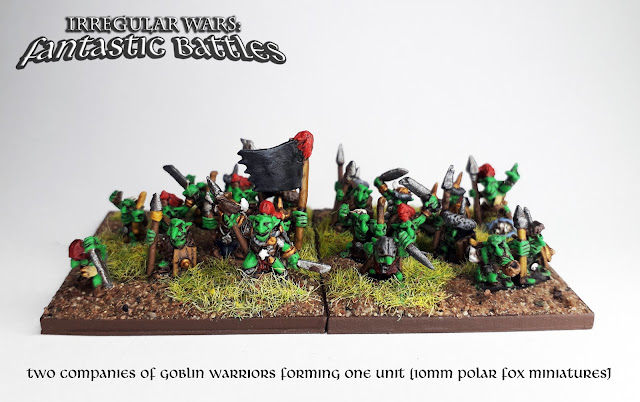 In this second post introducing Irregular Wars: Fantastic Battles, we will look at two of the fundamental aspects of any game - the basing system and unit profiles.

Unit basing and measuring distances
The basic unit in Fantastic Battles is the company; companies may act independently or be grouped together into larger formations. Each company is represented on the table by a number of figures on a single base. Companies are an abstract representation of a large body of men (or orcs, or lizardmen, or elves etc ad nauseum), perhaps numbering in the hundreds or thousands. There is no figure removal to represent casualties, the exact number of figures per company is unimportant – players should base their units in the way that looks best.

We recommend square 40x40mm bases for companies of 6mm-15mm scale figures, or 60x60mm for larger scales. However, the actual base size used is irrelevant to the game mechanics as long as the same base widths are used across all companies on the table. While square bases are recommended, rectangular bases are feasible with minimal adjustments as will be noted throughout the rules.

Characters may act as individuals or attach to companies. A character’s base can be any shape and size appropriate to the figure, but should be smaller than a company and easily identifiable.

In the game, all distances are given in generic units of measurement (u) based on the width of a single company. Therefore, in a game using companies on 40mm bases, 2u would equate to 8cm while 3u would equate to 12cm.

Table size
A standard engagement between two forces of between 750-1000 points each is 30x20u (i.e. 1200x800mm if using 40mm bases). Smaller games could be played on 20x20u tables, while larger games would need to have the table size adjusted accordingly.

Company profiles
Every company in an army will have a profile which dictates how it behaves on the battlefield. The example below is for a company of goblin warriors. Detailed guidelines for customising company profiles will be dealt with another time.

Character/Company
The ‘Character/company’ column gives the company an identity. All companies start out as one a set number of generic base profiles (elite, formed or irregular companies, fantastic beasts, dragons, batteries or vehicles) and are then customised using traits.

Resolve (RES)
A unit’s Resolve is perhaps its single most important factor. It indicates a unit’s willingness to stand firm in the face of danger. During a battle, pre-game and in-game events such as being shot at, taking damage in melee, or seeing friendly units flee degrade a unit’s Resolve, sometimes sending a cascade of panic through a player’s battle line. The retention, loss and restoration of a unit’s Resolve is key and players will find that quick thinking or clever Resolve management can often be the deciding factor in snatching victory from the jaws of defeat.

A single company of goblin warriors has only 3 Resolve. However, grouping multiple companies together into a single larger unit stacks their Resolve factors. A unit formed from two companies of goblin warriors (as in the photo at the start of this post) would therefore have 6 Resolve, while a large group made up of four companies would have 12 Resolve.

Move (MOV)
The Move column indicates the maximum distance a company may move in a single action phase. In this case, goblin warriors may move up to 3u in a single turn.

Melee (MEL)
The Melee factor shows the companies martial abilities and indicates how many attack dice are rolled during the Melee phase. Each company of goblin warriors may roll three attack dice under normal circumstances.

Shooting (SHT)
The Shooting column represents a company’s capacity for long range attacks, shown as two numbers divided by a forward slash. The first number represents how many attack dice are rolled in the shooting phase against targets within short range (2u) – it may represent close range shooting, thrown weapons or brave but ill-disciplined warriors dashing out of formation to launch individual attacks on enemy units. The second number represents true long-range shooting and indicates the attack dice rolled against targets within long range (5u). Each company of goblin warriors may roll two attack dice against a target within short range, or one die against a target within long range.

Defence (DEF)
A company’s Defence factor gives the target number required by an opponent’s attack dice to cause the company to lose Resolve. Goblin warriors have a Defence of 4+, so enemy attack dice against the goblins would need to roll 4s, 5s, or 6s to reduce their Resolve. Any rolls of 1, 2, or 3 would be ignored.

Traits
Traits represent the various features that differentiate units. Each unit may be customised with up to three traits, plus a possible fourth trait representing a racial trope. For this example, we are saying that all goblins have unreliable as a racial trope. Generic units of goblin warriors also have the shooting (mixed unit) and wild charge traits.

Points (PTS)
The Points column shows the cost to recruit the company. A more expensive company is usually more reliable, better equipped or trained, or has more resolve than cheaper companies. Goblin warriors cost a modest 23 points per company.