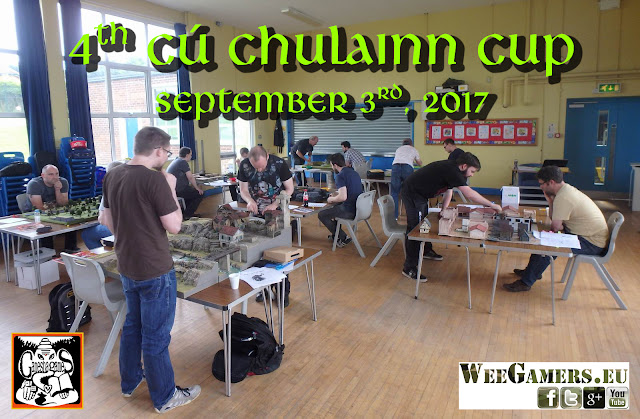 Once more, the time is nearly upon us for Northern Ireland's favourite, annual, Song of Blades and Heroes event - the Cú Chulainn Cup. 2017 marks our fourth outing of the competition, and we will again be hosted by the delightful Wee Gamers at their bunker in Whitehead, Co. Antrim.

When? Sunday 3rd September 2017, 10.00 for a 10.30am kickoff.
Where? Whitehead Primary School, 3 Islandmagee Road, Whitehead, Co. Antrim BT38 9NE.
The competition, consisting of five rounds, will be run over a single day.
Entry will cost £7.00.
Prizes will be provided by Ganesha Games and will be awarded to the Cú Chulainn Cup Champion and, by popular acclaim, to the ‘best’ warband.

Our previous days have been loads of fun, and with 14 entrants in last year's competition, there has also been loads of variety in warbands. From classic fantasy forces such as ratmen and orcs, to Vikings, pirates, zombie pirates, voodoo zombie pirates, Liliputians, Komodo dragons and much much more.

The lads (sadly so far it has been a male dominated affair) always face the day with good humour and sportsmanship. For several of our previous entrants, the competition was their introduction to the game, and new players are always welcome - and usually win!

As in previous years, the following rules will apply: