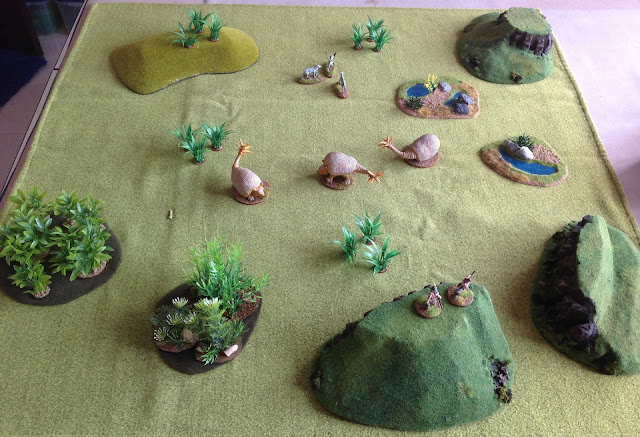 The Grey Wolf Clan has endured a miserable long winter. The last hunt of autumn was only a partial success and hunger has claimed the lives of the weaker Clan members. Now as Spring approaches some small hunting parties have gone out to scout for game. This report follows the adventures of one such scouting expedition, based on Nic's "Hunger Games" scenario. They have stumbled across a hidden valley, surrounding by high cliffs, never explored before and populated with strange but doubtless edible creatures. Amazingly it is free of ice and snow!

The first photo shows the general table layout. The two hunters (1 x Spear, 1 x Bow) survey their discovery from a cliff top in the foreground. On the valley floor some giant armadillos (Giant Grazers) and some caribou (Herd Grazers) go about their lawful occasions.

Because this is a hidden valley the only entrances or exits from the table are the narrow pass to the R of the hunters, and the far table edge. The two side edges and the rest of the near edge are deemed impassable due to cliffs. The Hungry (character trait) hunters need to kill any one of the beasts on the menu for their hunt to be a success. That will give them enough to eat and enough to carry back to the clan's Winter quarters. 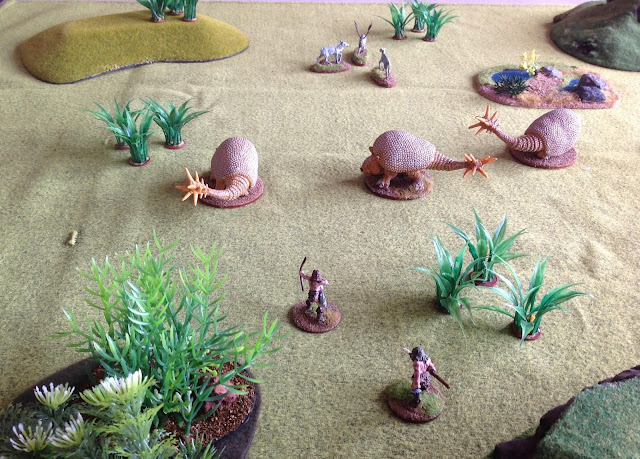 For the first couple of Turns the hunters worked their way towards a flank of the herds, so that any reaction moves by the beasts will be away from the main escape route as far as possible.

The archer tried a shot at the nearest armadillo, but the arrow bounced off its armoured hide and it moved away, scarcely aware of the attack. The hunters are very hungry, and tempted to try a more direct assault. But so far their hunting skills have overcome their pangs. 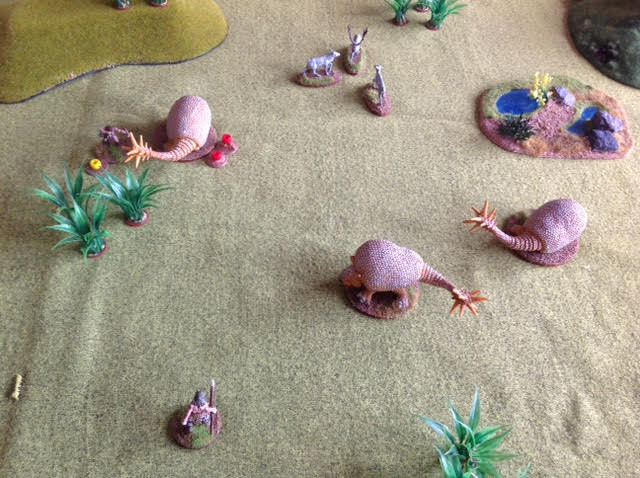 On Turn 5 the hunters pulled off a neat little ambush. The archer worked wide and ahead of the target beast (armadillo at L) and dropped into ambush mode. The other hunter then skulked into position behind the beast and threw a spear, causing a wound. The armadillo fled in reaction, directly away from the attack, and right into the ambush, where the archer caused another wound. The yellow marker shows the archer in ambush, the red markers show the armadillo's two wounds.


I differed from the PDEE draft rules here. As written an archer shooting always receives a -1 attack modification, and an ambusher receives a -1 as well. And the minimum score (on 1D6) required to wound a Giant Grazer is 5. So it's v hard for an archer to wound such a beast and impossible to do so from ambush. Nic rationalises the ambush modification as the tension arising from this sneaky course of action.

Anyway ... after a bit more hopeful but fruitless stalking of the Armadillo the hunters turned their attention to the caribou. An initial archery attack achieved only a Flee reaction from the prey ... 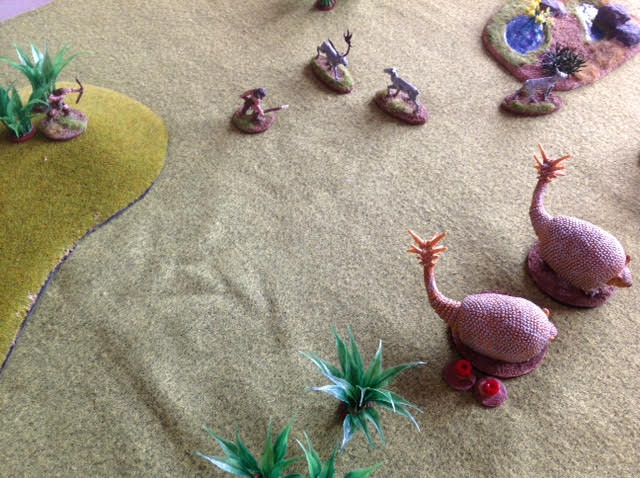 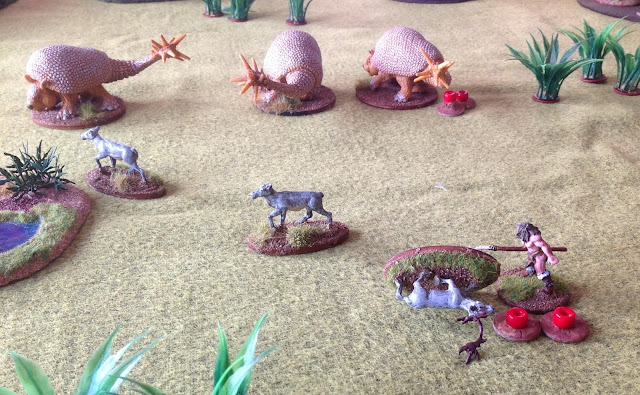 ... but perseverance was rewarded! A spear attack on the caribou buck wounded it and caused an attack reaction. The hunter was not hurt in the caribou attack and it gave an opportunity for the archer to get in a shooting attack which caused a second wound and killed the beast. In the photo above the archer is out of frame at the bottom R corner.

I had lost track of the Turn number by this stage, partly due to some interruptions, but I'm fairly sure this was Turn 8 which the scenario decrees is the end of the game (failing light). So the scouting party has been a success. Surely a good omen for the Grey Wolf Clan as Spring draws near.

The final game in this short series is my own scenario, not from Nic's rules ... 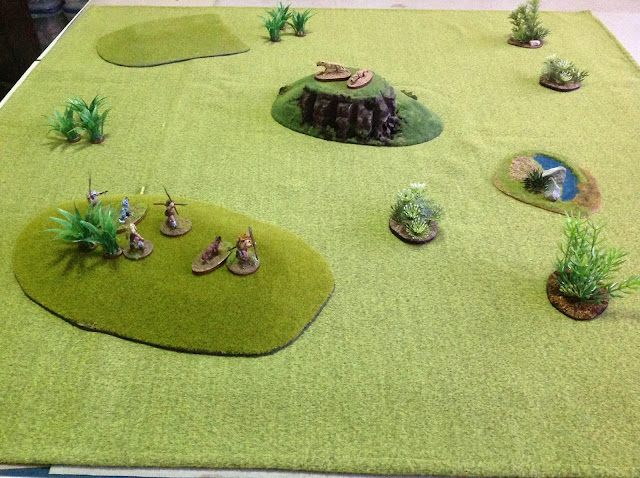 Now it is Autumn again. The earlier omen was a true harbinger. Summer has been good to the Grey Wolf Clan. Now, the Clan's inferior hunters, and gatherers, are busy chasing the inglorious snail and the frankly sessile nut [Penguin Atlas of Ancient History (1st Ed 1967) p18] to lay up stores for the coming winter. But the Clan Elders have another task for the crack hunters.

The Grey Wolf Clan's hunting range overlaps the territory of a family of lions (Pack Predators) who are a standing threat. The lions disrupt Clan hunting by chasing the same prey, and mean all resource-gathering expeditions need armed escorts. With the Clan in good fettle after a bumper season, it's time to chase these feline neighbours out of the area.

If the Clan can wound all the lions, or kill 3, they will force the lions off their territory. The Clan can also win by spending 8 uninterrupted actions (hunter and/or hound) searching the lions' home tor to find and kill the cubs. On the other hand if the beasts can cause 4 wounds to the hunters, they will force the Clan to abandon the project and retreat. Wounds to hounds don't count.

And one important rules change: at the end of a Turn any lion who has not made a reaction move must make a free move using the Pack Predators' reaction table but with "predate" treated as "attack" to ensure more furious action!

As usual the first photo shows the table layout, and positions at the end of Turn 1. The four hunters and two hounds of the Grey Wolf Clan started on the near table edge and moved into the hilltop on their first Turn. The lions' den is a cave in the central tor. Two female lions are guarding the new cubs. The two males are on patrol and may appear on any table edge, except the hunters' edge, at the start of any move after the second. The entry time and point are dice controlled.

The hunters know there are more lions in the offing, the Clan and the Pride are well acquainted. So for Turn 2 the hunters hold their position on the hilltop to see how events unfold. And surely enough on Turn 3 the two male lions enter, behind the hill on the far baseline. 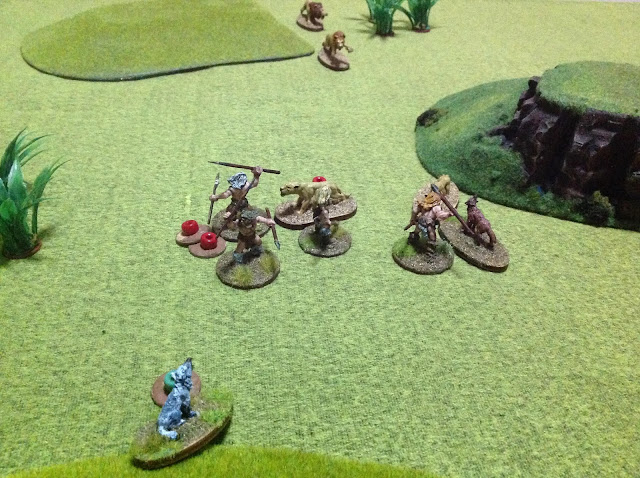 The hunters now move down off their hill to begin their attack. Their plan is to stay together and try to win by ganging up on each lion in turn. The female lions on den guard duty decide on a forward policy to protect the cubs, and move to meet them. The hunters initially display the usual abysmal standard of weapon handling we have come to expect from the Grey Wolf Clan, and score only a single wound, while the lions make short work of one of the hunters. The red markers show the sorry tale. The hounds don't add much. One attacks unsuccessfully, the other refuses to attack and starts howling (green marker). Presciently, as it's master is the hunter killed and now both master and hound are out of play. On the other hand the male lions have to cover a lot of ground to come to the support of their mates, so maybe the Clan can still pull this off.

Turn 4 saw a remarkable turnaround. Because the surviving hunters all started their activations close to the female lions, they were could use multiple activations to attack (throwing or thrusting spears). Both beasts were killed and the hunters were also able to start forming a spear line to meet the now quickly approaching male lions. The bodies have been tidied away for the childrens' version. 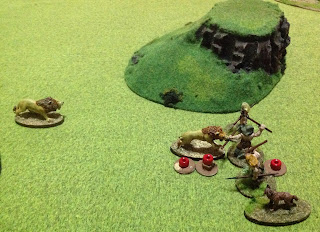 In Turn 5 the front male lion was attacked by the nearer hunter (brown hair) who had rolled two successful activations. For the first activation the hunter threw a spear at the lion causing a wound. The beast reacted by attacking the hunter, in turn wounding him. The wounded hunter then used his second activation to stab the lion with a backup spear, causing another wound and killing it. Advice to young hunters: always take >1 spear.

With three of the four lions now killed the Grey Wolf hunters have won a notable victory. The remaining lion will slink off, and the hunters and hound can scour the tor to complete the job by finding and killing the lion cubs. The result was close though - one more wound caused to the hunters and the moccasin would be on the other foot. The hunters were lucky the male lions arrived so far away. If they had appeared (for example) on the L table edge on the hunters' flank it might have been very different.