This week I decided to play around with the Palaeo Diet rules a little bit and take them to a different setting. From the distant mists of time to the mythical past, I dug around in my box of Greek myth stuff for Of Gods and Mortals and came out with a big pig and three heroes. Welcome to the closing scene of the Kalydonian Boar hunt!

Oineus, king of Kalydon in Aitolia, west-central Greece, has offended the goddess Artemis. Forgetting to honour her at the annual harvest festival, she has sent a giant boar to ravage the kingdom, destroying its crops and vineyards. Desperate to kill the beast, Oineus has sent out to all the neighbouring kingdoms, seeking heroic hunters to bring the beast down. Prominent among the hunters who respond are Meleager, the king's own son; Atalanta, the Arkadian huntress with whom Meleager is besotted, and Peleus, exiled prince of Aigina, soon to be king of Phthia, and future father of Achilles. 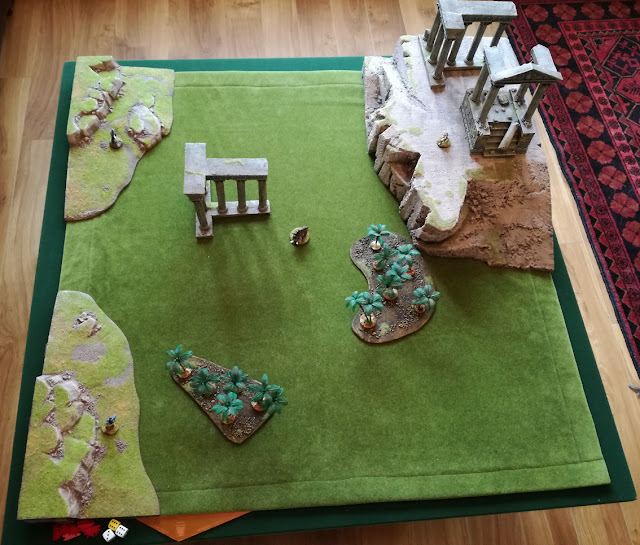 Here we see the three heroes having cornered the great boar by the overgrown ruins of a temple. Meleager is in the top right corner, Atalanta among the ruins to the left, and Peleus on the hillock at the bottom left. 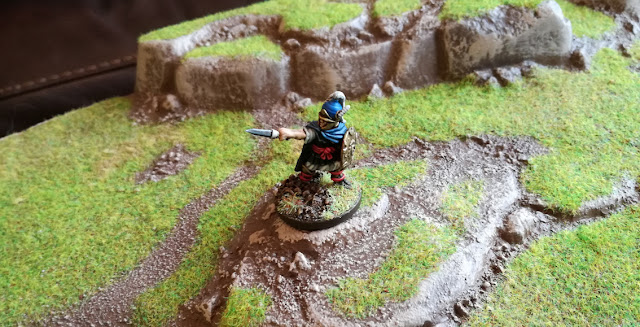 Meleager, son of king Oineus of Kalydon. Heir to the ravaged lands and said to be invincible until such time as a sacred log is fully burnt. Luckily for him, his mother knows of the story and keeps the log under lock and key. It'd take some truly terrible transgression (like, killing his uncles for instance) to cause his mother to put the log back into the flames. In game terms, Meleager is a hunter with a club. 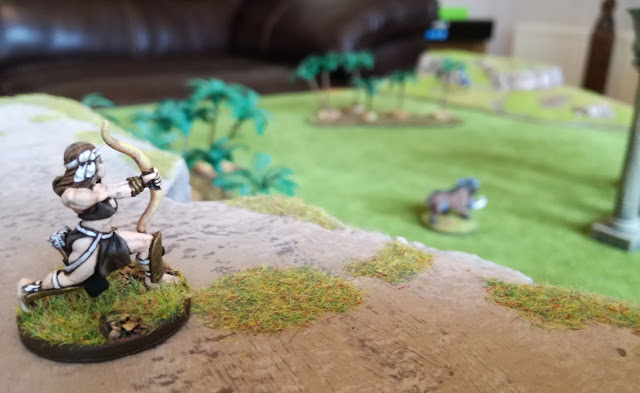 Atalanta, huntress of the Arkadian wilds. Abandoned as a baby by a father who wanted a son, she was suckled by a she-bear before being found and raised by rough highland hunters. In game terms, Atalanta is equipped with a bow and has the special Hunter trait which allows her to re-roll one missed shot each turn.

Peleus, exiled prince of the island-kingdom of Aigina. He is still little more than a brooding teenager. In the game, he - like Meleager - is a hunter carrying  a club. 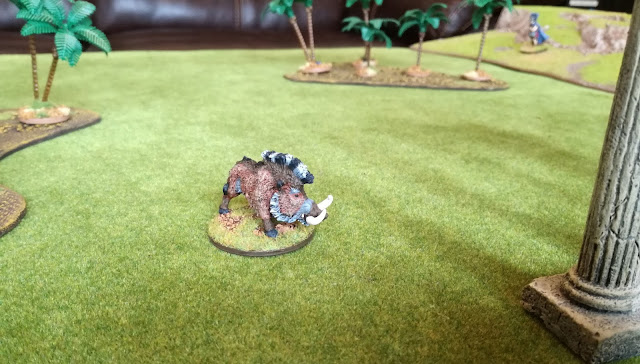 The boar. He's big and mean and cranky. In game terms I decided to use the Apex Predator attributes and reaction table. This meant that while he would not be hyper-aggressive, the hunters would know when they annoyed him. With a tough hide and savage, savage, tusks, the Kalydonian Boar will take some real skill to bring down. 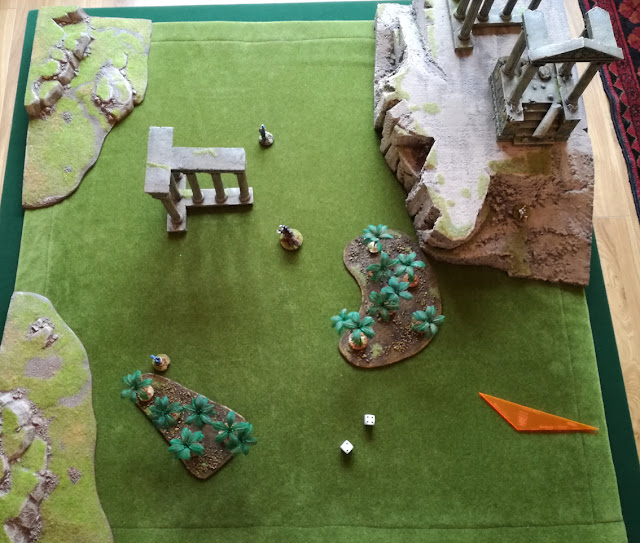 In the opening phase of the hunt, all hunters moved cautiously. The boar's sensitive hearing picked up their approach, but, being a true apex predator, he held his ground before their advances.

As Atalanta came to the foot of the temple escarpment, the boar stirred into action, shuffling forward into the thicket to investigate the huntress. Knowing full well the threat posed by the boar, Atalanta crouched down in the tall grass, ready to ambush the beast should it emerge from the trees. 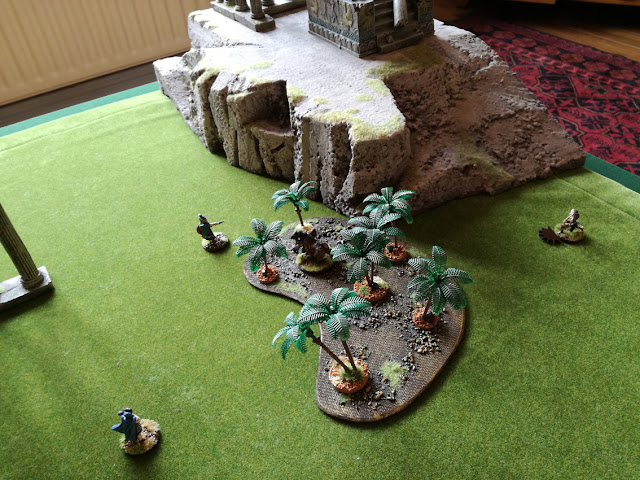 Meleager, fearing for his beloved's perfect skin, loped forward. The bear heard him, but still did nothing. 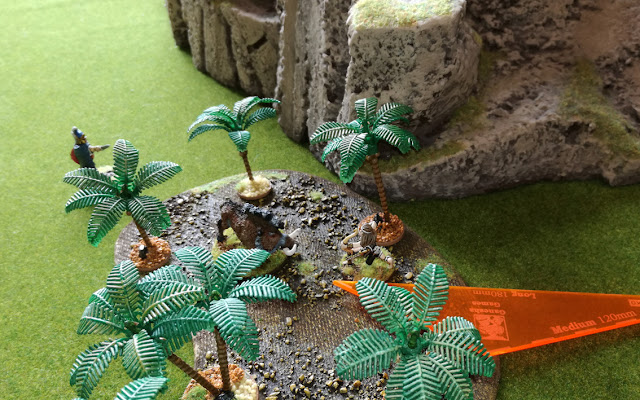 Seeing the beast distracted, Atalanta darted forward, firing her bow at close range, but the arrows bounced off the boar's hide and landed with a 'thunk' among the thick foliage. 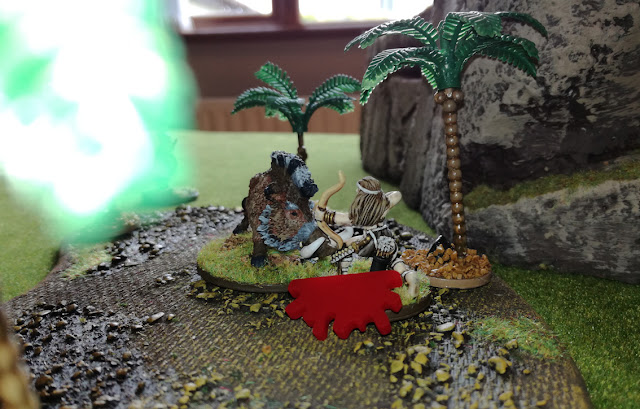 Now the creature burst into rage-fueled action, savagely swinging it's tusks and goring into Atalanta's shapely calf. Even out of sight beyond the thicket, Meleager died a little bit on the inside. His love's shapely calves were a true marvel to be hold and he was sure he just heard one of them being gored! 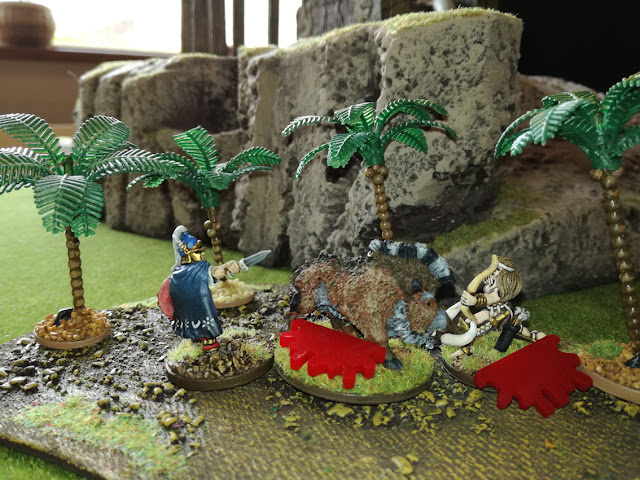 Dashing in to save the rest of her, Meleager entered the thicket and struck the first telling blow against the beast. It's blood pulsed out onto the undergrowth and the rage in its beady eyes intensified. 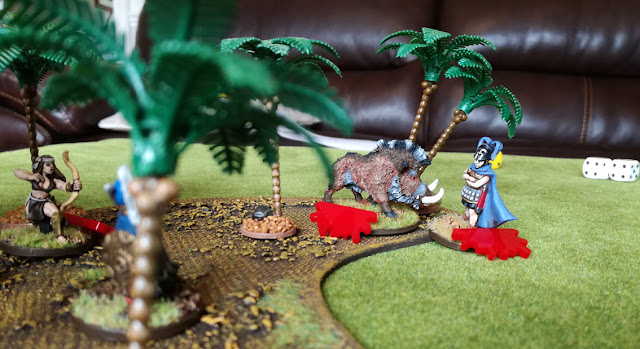 Hearing the squeals, first from the girl, and then from the beast, Peleus stalked forward in his own attempt to bring the boar down. The giant beast heard his approach and charged, meeting the young prince on the edge of the thicket and ripping a great gash into his princely side. Meleager heard the commotion, but felt nothing... 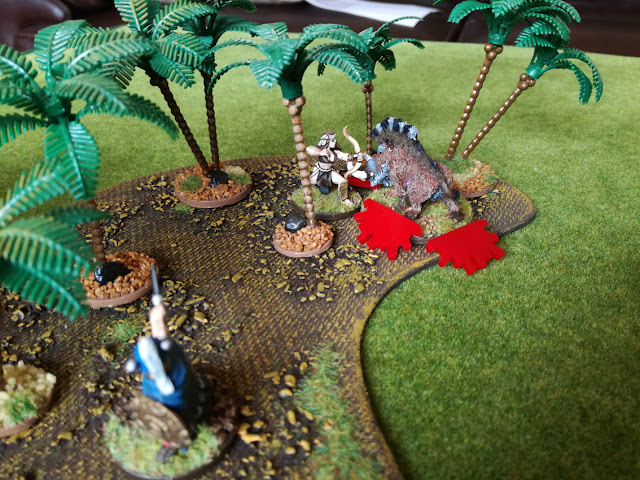 The boar bellowed in rage and its rank spittle covered Peleus' face, moments before he strategically backed away. Atalanta was not to be put off though and sprung forward, jamming one of her arrows into the side of the predator's thick neck. 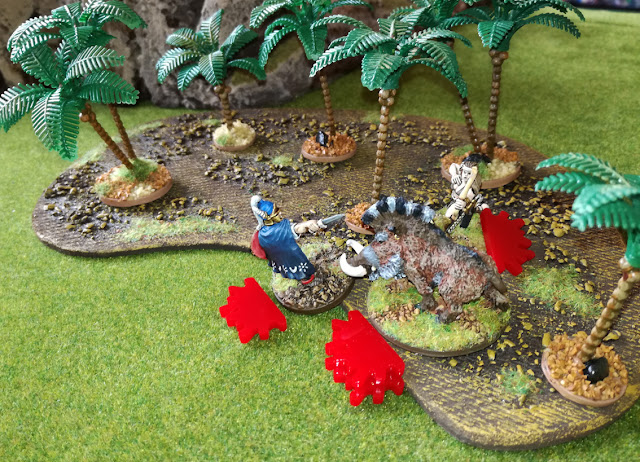 As it squeeled in pain, Meleager advanced once more, swinging his sword to attack but getting it lodged in a tree trunk. As he struggled to get it free, the boar lunged once more, lodging his own tusk, for the moment, in Meleager's thigh. 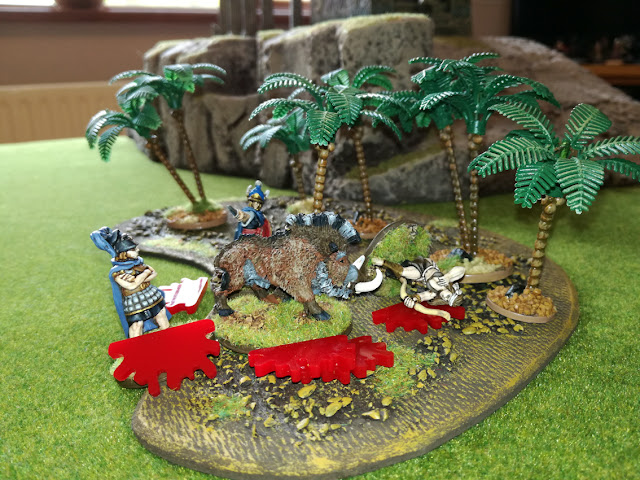 At this juncture, Peleus moodily stepped forward once again. Every being in that thicket was one bleeding. One more well timed blow from any one of the hunters could bring the beast down, but one more swing of the boar's tusks could likewise leave the hunters' limp bodies for the crows. Threatened by the approach of Peleus, the boar lashed out blindly, catching Atalanta in the small of the back and bringing her to the ground in a crumpled heap. Meleager still though she looked beautiful in a crumpled heap, but the hunt was certainly not going the way he had expected. Peleus looked dismissively at the poor huntress, took one more casual step and plunged his blade deep into the boar's massive body, puncturing its heart and killing it in an instant.

The hunt was done. The quietly triumphant Peleus went off looking for some palace slaves to collect the boar for tonight's victory feast, while the dissolute looking Meleager knelt, silently weeping for the romance that would never be.

The game mechanics worked really well for a direct transplant into this sort of game. If I did it again, I think I would use the pack predator reaction table for the boar to make him more aggressive and much more mobile, but I'd definitely keep the apex predator attributes. The boar was certainly a tough critter to crack and it could, quite easily, have brought all three of our heroes down. There is certainly potential here to use the Palaeo Diet game engine for all sorts of different scenarios. I think it would work really well in a Song of Shadows and Dust setting, pitching a small gang of thieves or assassins against a city militia or night watch!

Email ThisBlogThis!Share to TwitterShare to FacebookShare to Pinterest
Labels: Myth, Of Gods and Mortals, Palaeo Diet