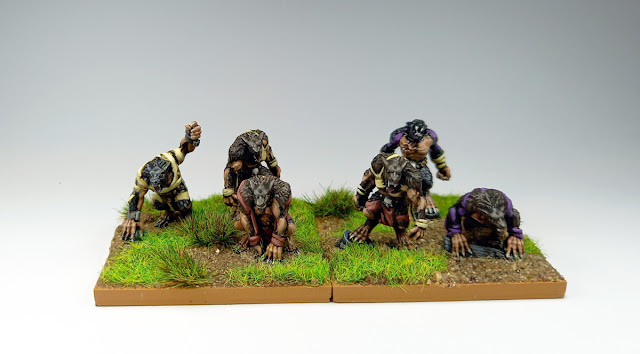 Leaping forward into the next phase of my Fantastic Battles vampire-led army of all-things-bitey, I have added a two-company unit of werewolves. In-game, I plan on using these as elite companies with feast (as a racial trope), fast, and forester. For the last of the optional trait slots I could go a number of different ways, but I think that giving them stimulants will reflect their savagery, along with the uneasy relationship that werewolves are often shown to have with vampires. 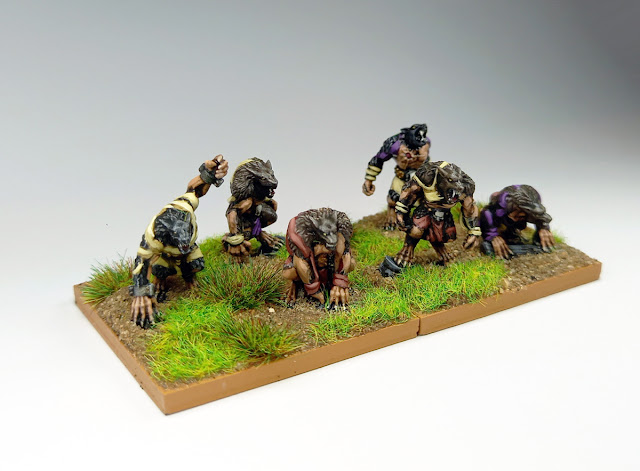 There is a surprising scarcity of these horror staples on the market in 10mm - indeed these were the only 3D printed ones I could find. Sculpted by Varus Miniatures, they are nice, but lack the deep detail of Forest Dragon's figures. I needed to resort to my usual basecoat-wash-basecoat-highlight-highlight approach in order to paint them, rather than the assortment of thinned paints and drybrushing that has proved so effective (and fast) when painting the Forest Dragon elements of the army.

The Varus Miniatures werewolves are also pretty big when compared to human-sized miniatures from Forest Dragon; much bigger than I would have expected. Here they are between a company of vampire knights and a vampire captain. I suppose if you wanted you could probably have them printed smaller, but that might further obscure some of the very fine details.