Time for another Galleys & Galleons dispatch from Mark in Thailand...
The Sea Cannibals have sent an expedition to occupy and settle the island of Liang Bua, in the Sondonesian archipelago. This will give them a new base, well situated to menace the whole region. The island is an informal protectorate of the Knights of St Michael of Singapore, and as it happened a small squadron of the Knights was on hand - on a goodwill visit no doubt - when the Sea Cannibals dropped in unexpectedly.

*****
The table setup and deployments are shown here. It’s an1800x1200mm cloth. The wind is blowing from the S, so directly across the table from the near edge. Being a trade wind it won’t change during the game. 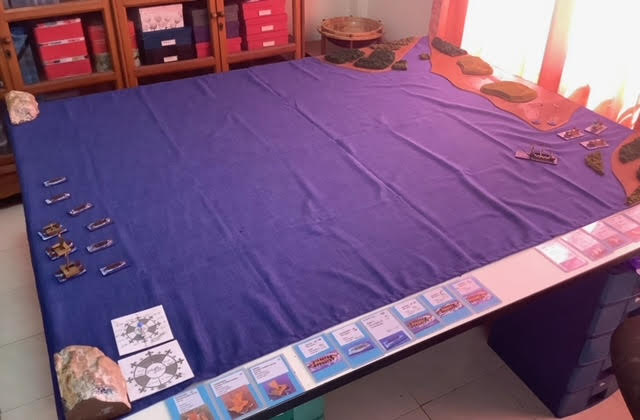 The Sea Cannibals start with initiative so activate first each turn. Their objective is to beach at least 2 of the double hulled canoes on a suitable shore (ie not a mangrove swamp) with enough time (3 turns - not necessarily consecutive - without being shot at with damage caused, or in close combat) to disembark the colonising parties and supplies.

All Knights vessels (not the aerials) start at anchor in the estuary and can not get under way until the turn after they roll at least 1 activation dice of 6 - representing being caught napping. Their objective is to stop the Sea Cannibals from establishing themselves ashore.

*****
On turn 1 the Sea Cannibals surged onto the table (appeared over the horizon). All the Knights vessels immediately prepared for action after a terrific round of rolling sixes.

After 3 turns the Sea Cannibals are holding their course. The voyaging canoes (Mangonui is on the port end) are making for the landing beaches, and the war canoes are angling to take on the enemy galleys. The Knights seem to be planning to intercept the enemy off the beaches. Probably the San Miguel (in the lead) will be opening fire some time soon.

Turn 4. Here’s San Miguel firing the opening shot - a full broadside - at the Ureia. No effect. Disheartened by the failure the galleys didn’t move (rolled turnover). 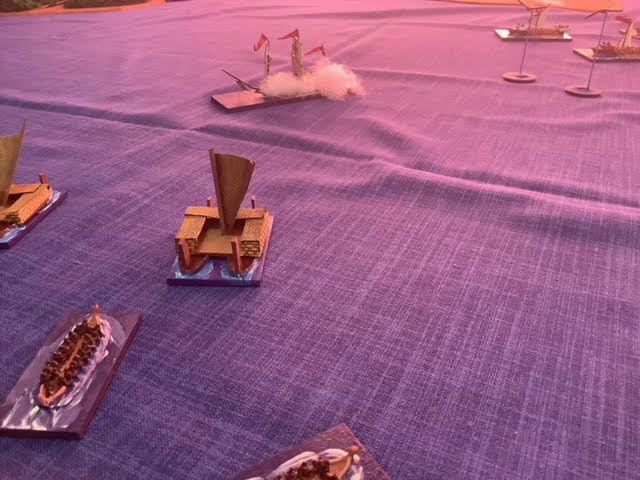 Turn 5: the Sea Cannibals hold their course for the beaches. The San Miguel, activating first on the Knights side, rolls turnover, so the galleys once again cannot move. But the Galeass has passed on one activation dice, and so blasts Ureia again at point blank range, causing 2 damage + rigging damage. Then San Miguel collides with Tangaroa, inflicting 1 damage and taking 0. Starkey reflects that every cloud has a silver lining. 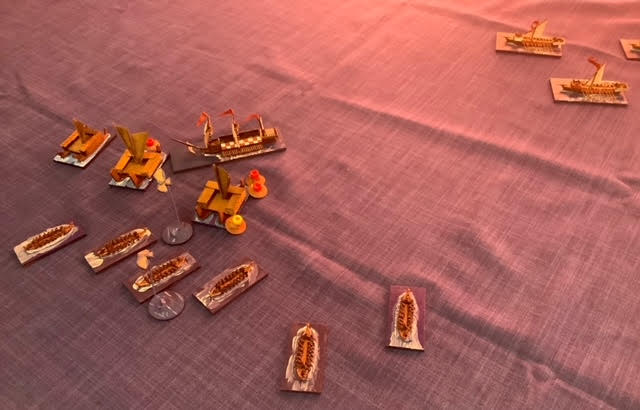 Turn 6 and Starkey is revising his opinion* as the badly damaged Ureia, and a war canoe, grapple the San Miguel but don’t have the AP to initiate boarding. The galley Corona rams the war canoe Ruapehu (again no grappling), but the collision causes no damage. The Knights then roll turnover - again. How did these clowns ever get to sea?
* Every silver lining has a cloud. 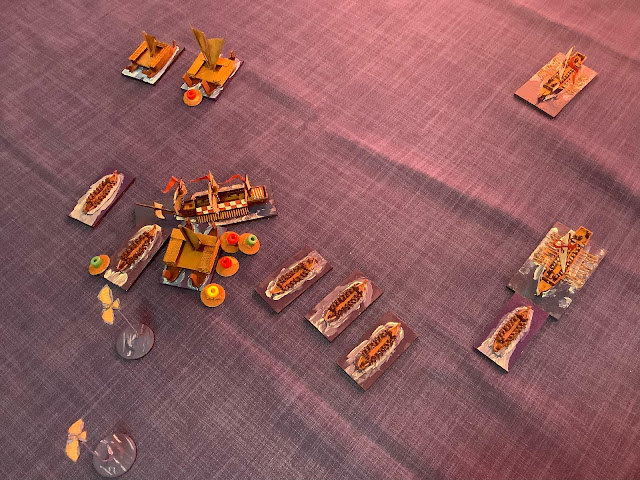 Turn 7. In the first bound (Sea Cannibals) the Mangonui & Tangaroa continued towards the beach, their eye on the objective. The fight against the San Miguel didn’t go so well though. The war canoe Te Arawa took initiative and boarded the Galeass over the port bow, but was repulsed with losses (1 damage). The Ureia almost succeeded, but the veteran NCOs on the Knights flagship saved the day, repulsing that attack too and taking Ureia to ‘crippled’ status.

Then on the Knights bound they actually got to do stuff. The galley Corona shot at the Ruapehu at point blank range, missed, then grappled the war canoe. The galley Stella Artois shot at the war canoe Aoraki, 1 damage. The third galley, Cervesa, headed towards the Sea Cannibals landing party, as did the ornithopters. The San Miguel managed to activate on 2 dice and, having gained a respite from its opponents grappled to port, coolly shot a full broadside from its starboard battery at the canoe Takitimu, inflicting 2 damage. The canoe being a ”boat” avoided special damage. 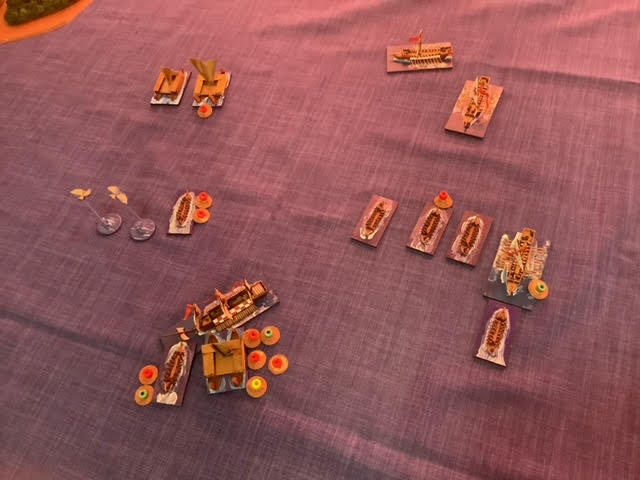 Turn 8. The Sea Cannibals will probably be able to get both uncommitted voyaging canoes ashore, but can they give them the necessary free time to unload? To give the best chance, Hongi Hika decides to forgo reinforcing the two boarding fights, and use his uncommitted war canoes to keep the Stella Artois & Cervesa away from the beachhead. There’s nothing he can do about the ornithopters, but they may be too weak to effectively interfere with the unloading. Hopefully.

The attack on the San Miguel continued to falter. The Ureia was captured, the Te Arawa took a 2nd damage. The fight between the Corona and Ruapehu finally got under way, with the Sea Cannibals gaining an advantage (inflicting 1 damage). Two war canoes intercepted the galley Stella Artois, but only one was able to grapple and board, and it was repulsed (lost 1 damage).

The Knights, in their bound, launched the first aerial bombing in this part of the world. Although a Ming Chinese airship fired a rocket at a surface target in a previous game IIRC. The two ornithopters bombed the war canoe Takitimu. The combat factor was C0, but per the FWFT supplement (p17) they got +1 for a sea level target. War canoes are C2. In the end 1 attacking bomb found its mark, hitting with an even numbered dice, taking Takitimu to 3 damage = crippled. Cool. But then the Knights rolled turnover again, so … 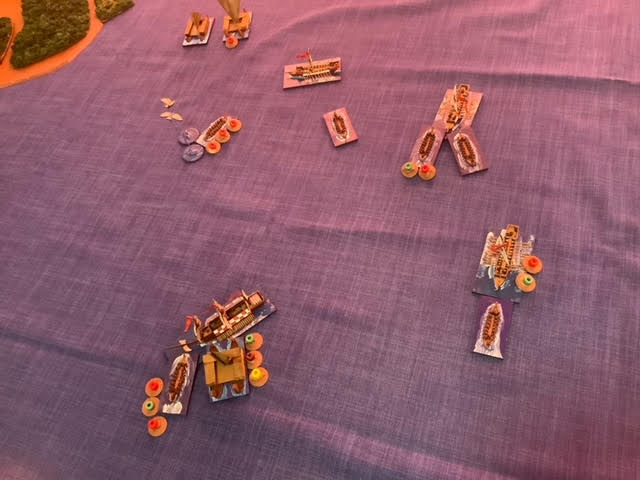 Turn 9. The Tangaroa & Mangonui reached the beach, but the ornithopters are going to harass them it seems. The three galley v war canoe fights drag on, with damage to both sides, and the galley Stella Artois (centre of the three fights) now in danger of capture. But the San Miguel has emerged from its own fight (bottom of shot) having captured both opponents. 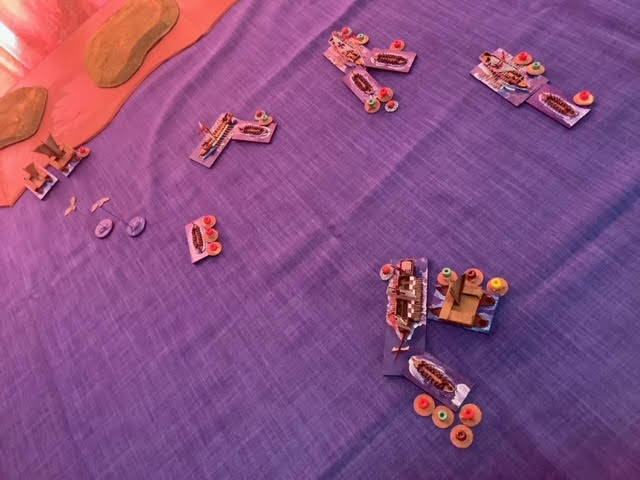 Turn 10. I’ve started using blue markers instead of brown to show vessels captured. The Sea Cannibals have lost the voyaging canoe Ureia, and the war canoes Te Arawa and Takitimu. The Knights have lost the galley Stella Artois. The Galeass San Miguel is now moving away from its two late opponents (I forgot to take off the green “grappled” markers) and may yet be in time to attack the beached canoes. They have achieved 1/3 of their unloading turns, as the ornithopters were unable to attack them successfully this time. 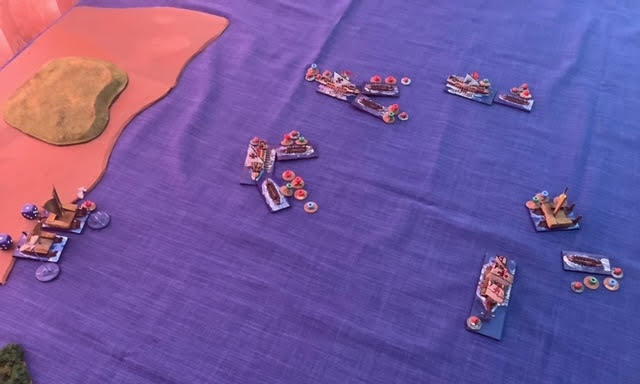 Turn 11. The Sea Cannibals lost 2 more war canoes - Ruapehu & Taranaki - this time as the galleys Corona and Cervesa vanquished all their opponents. San Miguel stood in towards the beach but it’s shooting was unsuccessful. The ornithopters turned to make another bombing run. The beached canoes have now completed 2/3 unloading turns. 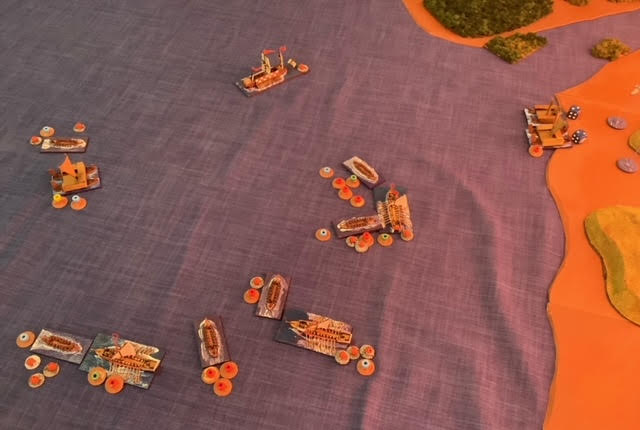 Turn 12. The Sea Cannibals moved their un-captured war canoes (one crippled, one with “only” 2 damage) ready to run further interference with the galleys should it be necessary. But, the Knights were quite capable of losing the game without their help. The galleys Corona and Cervesa activated, and cut grapples from their defeated opponents ready to continue the battle. But they were too far away. The ornithopters couldn’t hit the beached canoes, and San Miguel, activating last, rolled tuatara eyes and now will have to look lively to avoid running aground in the mangroves. Momentary inattention on the part of the Officer of the Watch, Sir. 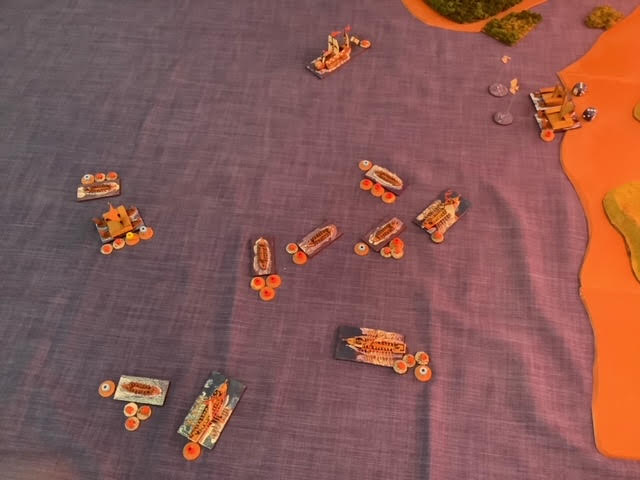 Hongi Hika and his Sea Cannibal expedition have achieved their objective, making a successful disembarkation on Liang Bua, and by doing so have won the game. Sir Oliver Starkey must return to Singapore to report failure.